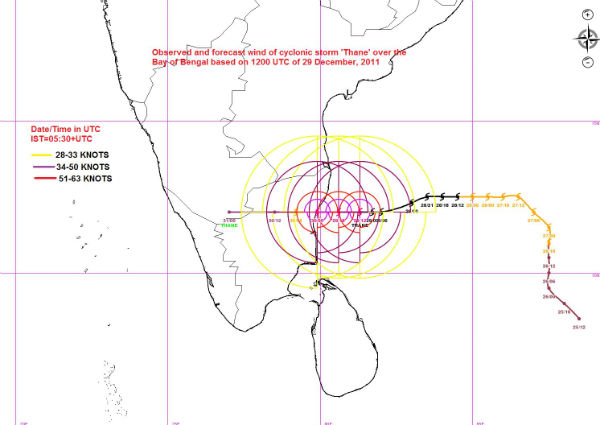 Tropical Cyclone Thane slam southeastern India bringing damaging winds, flooding rain and inundating storm tides. The likely landfall will happen early Friday, local time, on the Tamil Nadu coast south of Chennai. Cities near the forecast landfall would be Puducherry and Cuddalore. A storm tide about 1 meter above normal, with some inundation of low-lying areas, was forecast.

India government warnings advised for damaging winds up to hurricane strength, flooding rain to at least 25 cm (10 inches) and tidal flooding 1.0-1.5 meters (up to 5 feet) above astronomical levels. Wind damage to vulnerable buildings, electrical and communication lines, and diverse trees and crops were cited in government statements. Thane will weaken and dissipate quickly once inland. However, its moisture will lead to some unseasonal rains as far away as northern India. 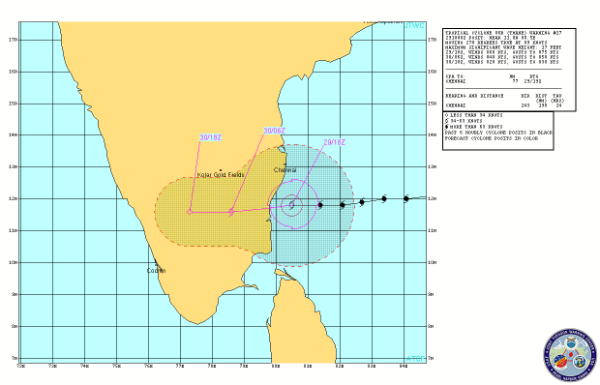 According to latest JTWC report, tropical cyclone Thane is located 75nm south of Chennai and moving westward at 09knots over last  six hours. Thane will continue moving westward under the steering influence of the mid-to-upper level subtropical ridge. Thane is approximately 40nm away from making landfall over Southeastern India as a significant tropical cyclone. Maximum significant wave height is 17 feet.

IMD forecasts rainfall at most places with heavy to very heavy falls at a few places and isolated extremely heavy falls (25cm or more) would occur over north Tamil Nadu & Puducherry during next 24 hours. Rainfall at most places with isolated heavy to very heavy rainfall would also occur over south coastal Andhra Pradesh and Rayalseema and isolated heavy rainfall would occur over south Tamil Nadu during the same period.

Gale winds speed reaching 110-120 kmph gusting to 135 kmph is likely along and off north Tamil Nadu, Puducherry and adjoining south Andhra Pradesh coasts during next 12 hours. Storm surge of about 1.0-1.5 meter height above the astronomical tide would inundate the low lying areas of Puducherry and Chennai, Tiruvallur, Kanchipuram & Villupuram districts of north Tamil Nadu at the time of landfall.
The JTWC and IMD both forecast further strengthening of Thane, already equivalent to a Category 1 hurricane, before the storm’s landfall.

Even after landfall the system is likely to maintain its intensity for 12 hours and weaken gradually. Under its influence rainfall at most places with heavy to very heavy falls at a few places and isolated extremely heavy fall is likely to continue over north Tamil Nadu and Pudducherry during next 24 hours after landfall causing inundation of low lying areas. Gale/squally wind speed reaching 80-90 kmph gusting to 100 kmph causing damage to thatched roofs and huts breaking of tree branches causing minor damage to power and communication lines over north Tamil Nadu and Pudducherry during 12 hours after the landfall. People are advised to remain indoor/safe place and cooperate with state Govt. officials and disaster management agencies. 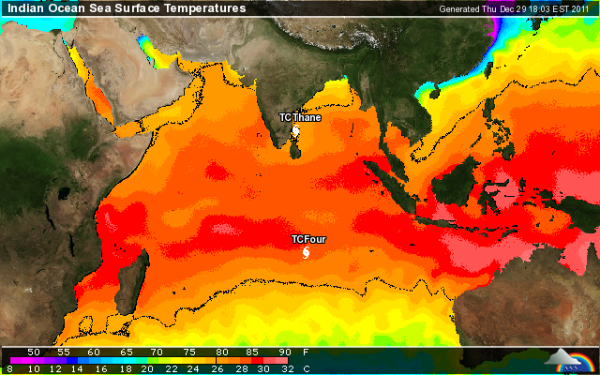 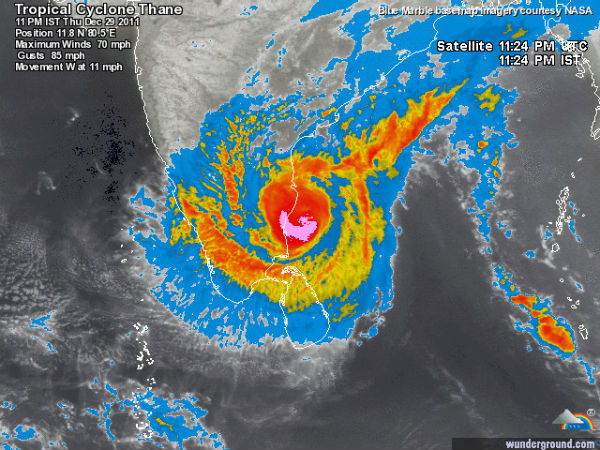 Thane is the sixth storm and the first very severe cyclone of the 2011 North Indian Ocean basin cyclone season. Thane is expected to make landfall between Chennai and Nagapattinam along the Tamil Nadu coast as a severe cyclonic storm on Friday morning, December 30, local time. The direct impacts of the storm are expected along the Tamil Nadu coast.

On average about 5 to 6 tropical cyclones form in the North Indian Ocean basin each year of which 2 to 3 become severe cyclonic storms (maximum sustained wind speed less than 48 knots). The frequency of severe cyclonic storm landfall is highest along the coast of Tamil Nadu and Andhra Pradesh. In the recent past, the December 6, 1996 cyclone and Cyclone Jal in 2010 made landfall near Chennai.