Tropical storm "Sendong" could set sights on the southern Philippines by Friday if the latest Pacific tropical cyclone develops according to forecasts. The likely path and strength of this weather system would make for damaging wind and flooding rain reaching southeastern Philippines as early as Friday.

At 4:00 p.m. today,  or "WASHI"  was estimated based on satellite and surface data at 610 km East Southeast of Hinatuan, Surigao Del Sur (7.6°N, 132.0°E) with maximum sustained winds of 65 kph near the center and gustiness up to 80 kph according to Philippine Atmospheric, Geophysical and Astronomical Services Administartion (PAGASA). It is forecast to move West Northwest at 30 kph. 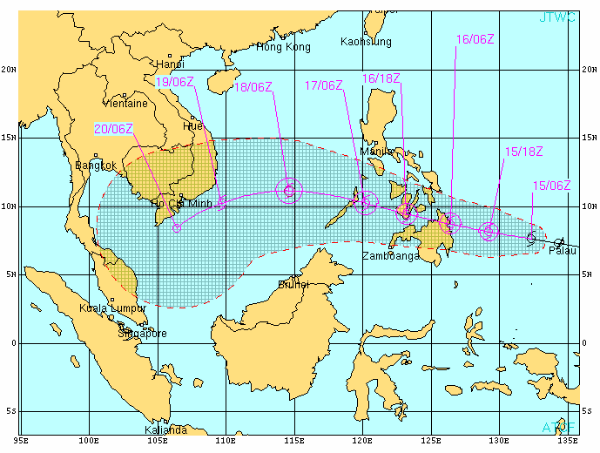 Storm system is developing over the western Pacific Ocean about 140 nm west of Palau, Micronesia according to the Joint Typhoon Warning Center (JTWC). Movement was towards the west at more than 20 mph. Sendong will maintain a steady west-northwestward track along the southern periphery of the subtropical ridge and track through the Visayas region of the Philippine archipelago. track guidance predicts the system will exit the Sulu Sea in the Mindoro Strait region. Once into the South China Sea, the dominant steering force will shift from subtropical ridge to the southern end of a winter cold surge dominating the northern South China Sea. The combination of rising vertical wind shear and modified continental polar air could weaken the system. 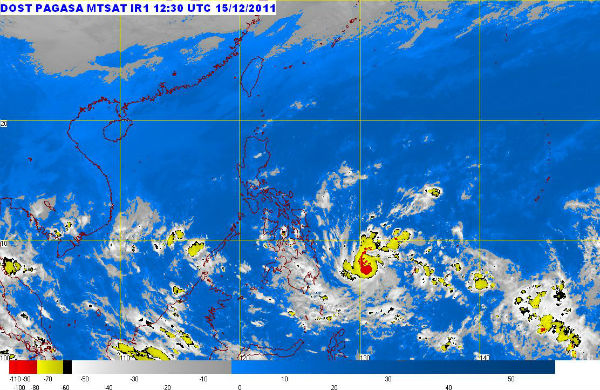 Tropical cyclone statistics show that the western Pacific Ocean on average  sees typhoons on a frequency of more than once every December.