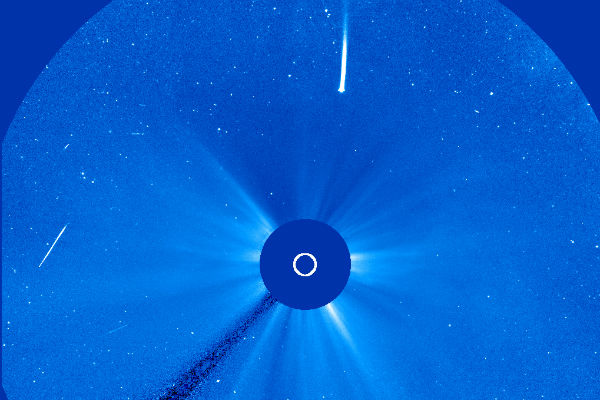 Early this morning Comet Lovejoy (C/2011 W3) entered in the field of view of LASCO C3 camera. C/2011 W3 is the brightest sungrazing comet that SOHO has ever seen. As it entered LASCO C3  Comet Lovejoy was probably around magnitude 2 and it could increase by up to 8 orders of magnitude! 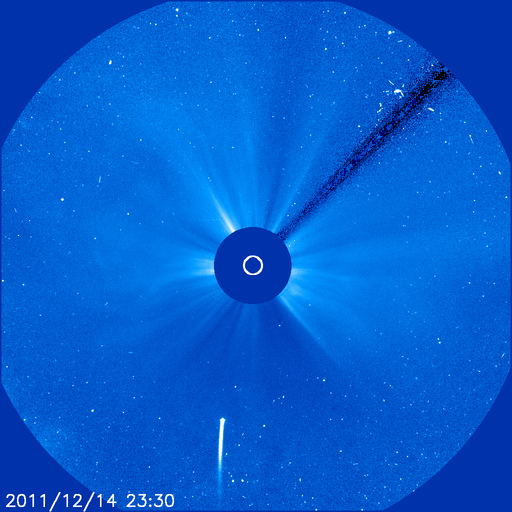 Karl Battams, a researcher at the Naval Research Laboratory in Washington, D.C.  suggest if Comet Lovejoy gets as bright as mag -4 or -5, there is a tiny but non-zero chance that it could be visible in the sky next to the Sun by simply blocking the Sun out behind a tall building, for example (Important: Do NOT point a telescope or binoculars at, or near, the Sun! It can and will badly damage your eyesight.) It will be reaching perihelion right around sunset time for people in the US East, Central, Mountain, and Pacific time zones, so if you have one of those nice sunsets where you can actually look right at the Sun, be on the watch for the comet on the left of the Sun (for northern hemisphere observers). Karl Battams runs the Sungrazing Comets website, devoted to comets discovered by the SOHO and STEREO spacecraft.

When the comet makes its death dive, it could become as bright as Jupiter or Venus, according to SpaceWeather, though the glare of the sun will hide the event from human eyes.

Sungrazer website gives preciouss files to download from STEREO data which is a bit harder to find:

It's really hard to get near-realtime data from STEREO because the spacecraft are so far from Earth and researchers have very limited bandwidth to download material. I'm seriously irritating my coworker by constantly nagging her to playback the latest data for me!)

Another Kreutz-group comet is sundiving too. Kreutz-group comets often arrive in pairs or sometimes trios, and the big bright ones in particular will often have a companion comet. It was spotted in the LASCO C3 images by seasoned comet hunter Zhijian Xu at Dec 14 2011 11:48:48. It's orbit is slightly different from Lovejoy's.

Dr. Matthew Knight (Lowell Observatory/JHU-APL) has just sent to Sungrazer website some of his preliminary photometry calculations for Comet Lovejoy in the LASCO C3 images. They show that Comet Lovejoy was at approximately magnitude 2.0 as of the latest LASCO C3 data available (16:32UT, Dec 14, 2011).

C7.5 solar flare took place at 14:59 UTC Wednesday morning around departing Sunspot 1367. This region picked the wrong time to get active, as it is rotating out of direct Earth view. Numerous C-Class flares have been detected within the past 24 hours, and all of them have been centered around Sunspot 1367 which is now located on the western limb. The largest flare thus far, was a C7.5 at Wednesday morning. Any explosions at this point, will not be Earth directed because of the spots location. A new Sunspot quickly formed in the northeast quadrant, and is located to the south of new Sunspot 1376 and it is currently stable. 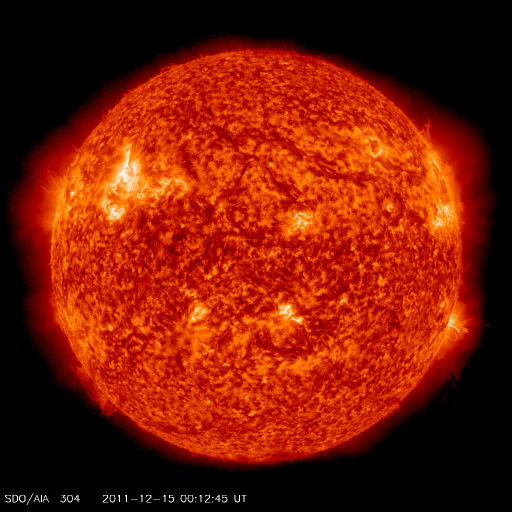 Solar activity was low. There were numerous C-class events during the past 24 hours; the largest was a C7 at 1459Z from
Region 1367 (S18, beyond west limb). GOES SXI imagery showed that Region 1367 was responsible for the other C-class events during the period as well. Region 1374 (S18W11) continues to be the largest group on the disk but was stable and quiet. New Region 1377 (N11E43) was assigned and appears to be a small, D-type sunspot region. A coronal mass ejection was noted from the west limb at about 14/0412Z; disk imagery indicate the source region was near the limb and the CME is not expected to be geoeffective. Solar activity is expected to be low for the next three days (15-17 December).