NASA's Tropical Rainfall Measuring Mission (TRMM) satellite was providing forecasters with the rate in which rainfall was occurring in Tropical Storm Sendong (Washi) over the last week, and now TRMM data has been compiled to show rainfall totals over the devastated Philippines. 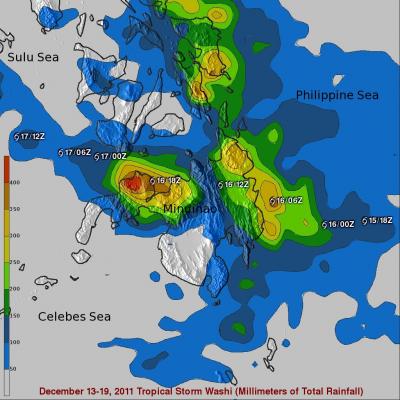 Washi made landfall on the east coast of Mindanao on the afternoon of Dec. 16 as a moderate tropical storm with sustained winds reported at 55 knots (~63 mph). Despite its modest intensity, Washi had a huge impact on the island. As Washi made its way across Mindanao, it dumped heavy rains over parts of the island, which in turn triggered flash floods and mudslides. These turned out to be catastrophic as over 900 people were killed with hundreds more reported missing when entire villages where swept away.