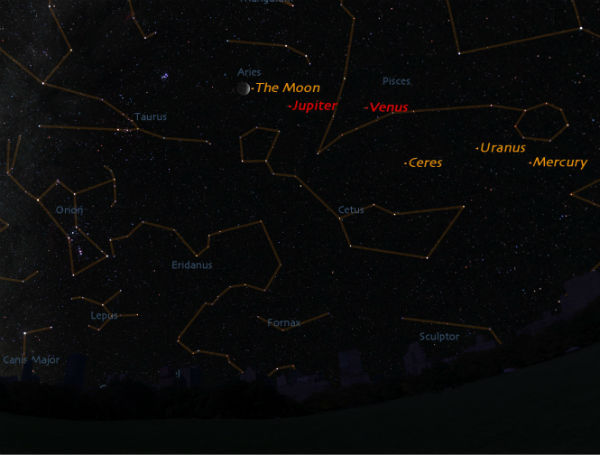 The two intensely bright “stars” in the night sky tonight are a pair of dazzling planets: Venus and Jupiter as bright lights outshining all stars right now. If you have clear skies overhead, you should be able to spot these eye-catching worlds with your naked eyes.

Venus and Jupiter will shine brightly in the evening sky well into 2012 with only the Moon as brighter body on the sky. Until March 2012 the planets would be moving closer and closer.

Binoculars or a small telescope will reveal Venus to be a round, featureless disk rather than just a point of light. A modest amateur telescope can help you discern the colorful cloud bands of Jupiter.

The brilliant Venus will be low in the southwest sky, visible from around sunset on into the early evening. On Dec. 26 and 27, Venus will meet the waxing crescent moon, as the two make a close evening pass. In January, Venus will appear noticeably higher in the sky, and observers will also be able to spot it later into the evening.

Venus is the second planet from the sun, and the brightest planet in our night sky. This is because as Venus circles the sun inside Earth’s orbit, the celestial body is visible for about 9 1/2 months in the evening sky, and then alternates, spending approximately the same amount of time in the morning sky while rest of the time it’s behind the sun or in front of the sun and hidden by its glare.

Venus takes about 225 Earth days to travel around the sun. The planet also rotates the opposite way that Earth does on its axis. So on Earth, the sun rises in the east and sets in the west, but on Venus the sun would rise in the west and set in the east.

The other bright in the night sky now is the planet Jupiter. Throughout December, Jupiter will dazzle skywatchers in the late evening sky, lasting into the early morning hours. At nightfall, Jupiter is on the border between the constellations Aries and Pisces. Jupiter is high in the eastern sky at sunset. The planet moves westward into the evening and reaches its highest point in the sky between 7 p.m. to 9 p.m. local time (later each night as the month progresses). As Jupiter dances westward in the night sky, it will set between 2 a.m. and 3 a.m. local time as we approach the end of the month.

This month, Jupiter’s moons will also take center stage. On Dec. 27, at 10:52 p.m. EST (0352 GMT Dec. 28), three of Jupiter’s moons will put on a neat celestial show. Callisto will appear due south of Jupiter, with Europa moving from in front of the planet, and Ganymede, off to the right, will cast a shadow just below Europa. (Space.com)