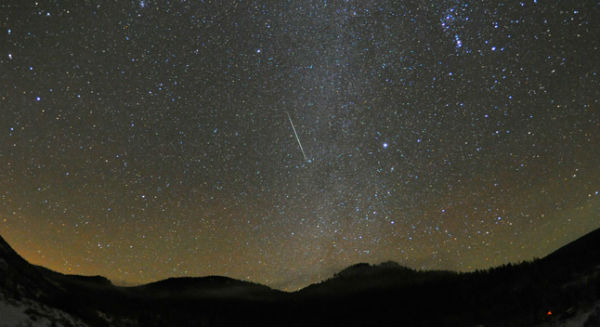 The last big meteor shower of the year — the annual Geminids shower — peaks tonight (Dec. 13), but bright moonlight could illuminate the night sky and spoil one of the most spectacular light show of the year. On a clear night, skywatchers have reported seeing up to 120 meteors per hour during the peak of the Geminids in past years. This year is expected half that rate. There will probably be around 40 or 50 per hour on the night of the 13th.

This is probably the best meteor shower to watch when the moon isn’t getting in the way. Occasionally, the Geminids can also produce stunning fireballs, and if that happens this year, they should be bright enough to be visible through all the moonlight. The best conditions are where the sky is at its darkest,  starting from before moonrise with the greatest display  around 2:00 a.m. local time when the sky window is pointed in the optimum direction. Just look along the ecliptic plane and follow the constellation of Gemini as it cruises roughly east to west across the sky. The stream for the Geminids is very broad and lasts for few days Skywatchers, be aware of cold winter night – dress warm. 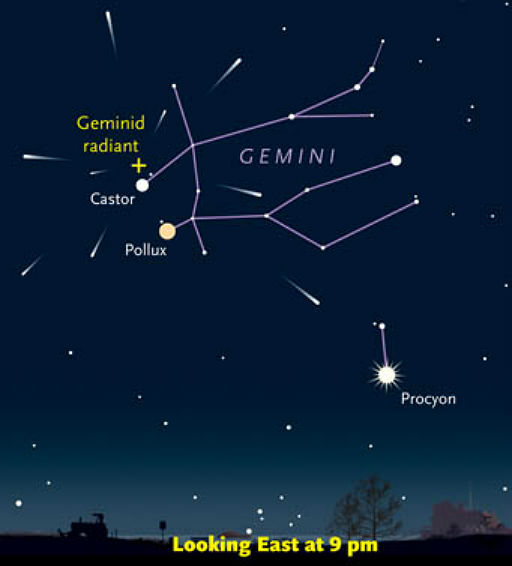 The radiant (apparent source point) of the Geminid meteor shower is near Castor, the fainter of the Twin Stars in the constellation Gemini. Not shown here is the bright Moon; it’s below Gemini on the evening of the 13th and farther below on the 14th. (Credit: Sky & Telescope)

The shower’s radiant, or perspective point of origin, is near Castor and Pollux above the Moon (which is not plotted here). The meteors can appear anywhere in the sky, but their paths, if traced backward far enough across the sky, would cross the radiant.

Only two days ago the moonwatchers enjoyed viewing the lunar eclipse. The Quadrantids will be the next major meteor shower – on the night of Jan. 3, 2012.

The annual Geminid meteor shower has built up a reputation as one of the most impressive of the year, sometimes even eclipsing the more famous Perseid meteor shower that occurs every August. The source of these meteors is a strange asteroid called 3200 Phaethon, which sheds bits of dusty debris. The Geminid meteor shower gets its name from the constellation Gemini,where meteors appear to radiate from this point in the sky. When we look toward this spot, we are actually looking into the line of 3200 Phaethon’s orbit, scientists have said. 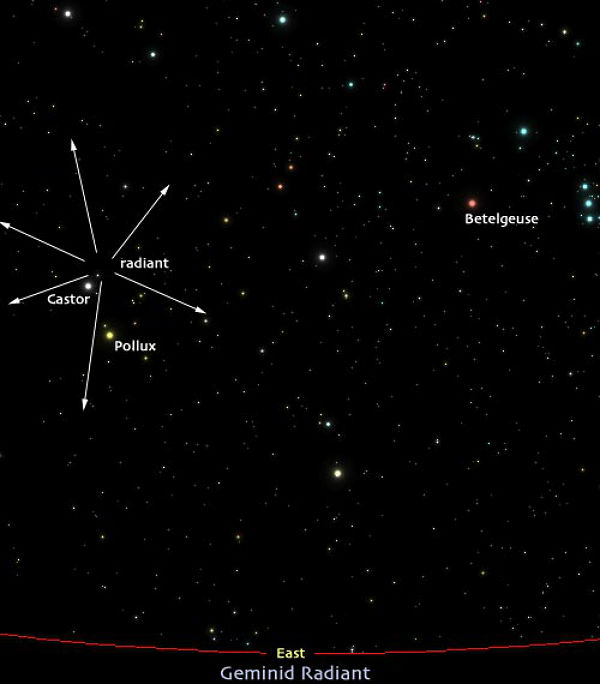 Location of the Geminids for Northern Hemisphere observers  The view from mid-northern latitudes at about 9:00 p.m. local time around December 13. The graphic does not represent the view at the time of maximum, but is simply meant to help prospective observers to find the radiant location. The red line across the bottom of the image represents the horizon. (Source: Meteor Showers Online) 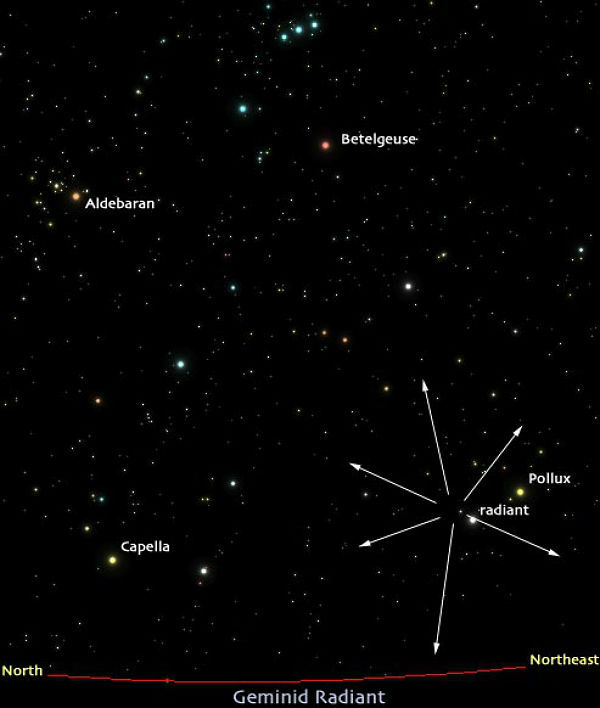 Location of the Geminids for Southern Hemisphere observers  The view from mid-southern latitudes at about 11:00 p.m. local time around December 13. The graphic does not represent the view at the time of maximum, but is simply meant to help prospective observers to find the radiant location. The red line across the bottom of the image represents the horizon. Although the actual radiant is below the horizon, the stars just above the horizon are those of the constellation Perseus. (Source: Meteor Showers Online)

Thanks to NASA, there’s a new application which will help you to track, count and record information about this meteor shower and any meteor shower in the world – including sporadic ones! The “Meteor Counter” app will allow you to record your observations with an easy-to-use “piano key” interface. As you strike the keys, the app records information for each meteor, including the brightness and time. Once your observing session ends, your information and data is automatically uploaded to NASA researchers for analysis.