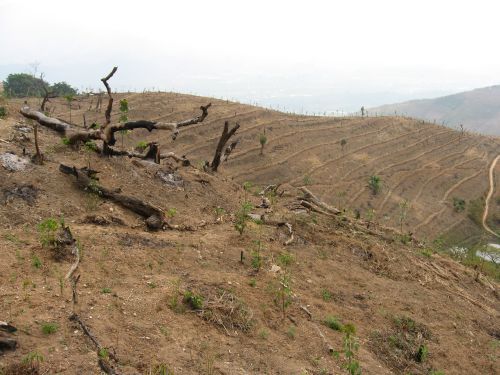 Part of Myanmar’s breadbasket in the country’s centre is fast deteriorating and the area may face greater food insecurity without immediate action, local NGOs warn. Myanmar ranks #4 in the world for annual forest area lost per year. Between 2000 and 2005, the country lost, on average, 466,000 hectares per year which puts their annual deforestation rate at 1.45% based on FAO statistics.

Renewable Energy Association Myanmar calls on residents in the dry zone to work with agencies to boost tree planting, soil conservation and water management. The regions of Mandalay, Magway and Lower Sagaing, which comprise the dry zone and experience among the lowest rainfall levels in the country, form the breadbasket for crops that require little rain. But the maize, cotton, pulses, beans and sesame are threatened by soil breakdown and deforestation occurring at an “alarming” pace, according to  Forest Resource Environment Development and Conservation Association. The cultivable land that remains in the dry zone has been broken down through erosion, tree cutting for firewood, poor planting practices, overgrazing and urbanization – which means less food, say local agencies. 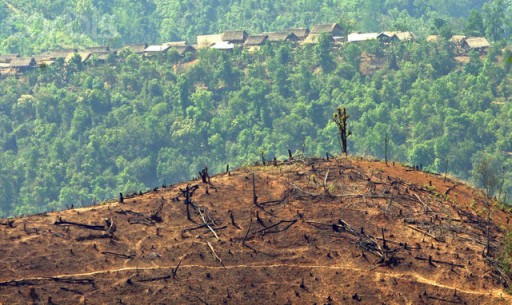 The country’s dry season lasts on average from late October to May. The zone’s temperatures average 40-46 degrees Celsius during the hot season from March to May.

The Forest Ministry estimated in 2006 that the region – home to one-third of the country’s more than 55 million population – was losing 800 hectares of forest annually, in its most recently submitted report to the UN Convention to Combat Desertification (UNCCD). Some of the land has simply stopped producing. Land degradation in terms of soil erosion and soil fertility loss is quite serious,” according to the local NGO, EcoDev.

Myanmar’s forests covered 31,773,000 ha, or 48 percent of the country in 2010. On average, it has lost just over 1 percent of its forest cover every year since 1990, or more than seven million hectares in all, according to the UN Food and Agriculture Organization’s 2011 State of the World’s Forests report. The government reported reforesting 117,414ha in the dry zone from 1994-2006, the most recent year for which such data was submitted to UNCCD.

At this pace, a “severe food crisis” could unfold over the next decade if the soil is not saved, said Aung Min Naing, the dry zone’s coordinator for the international NGO ActionAid.  While greening efforts are important, boosting food security demands a “comprehensive development effort” to protect the poorest from the impacts of weather variability, said Marcus Prior, World Food Programme’s Asia spokesman.

Food consumption was inadequate for 65 percent of families surveyed in Magway Division in December 2009, while 12.1 percent of children under two years old were acutely malnourished in Mandalay Division in August 2009, according to multi-agency surveys.  After the country signed the UNCCD in 1997, the government founded the Dry Zone Greening Department with local and international NGOs.  But need outstrips the limited activities and access.

Spurred by destruction from the 2008 Cyclone Nargis, a group of international donors pledged $100 million to the fund from 2010-2015 to boost incomes and agricultural production.  Meanwhile, farmers still remember the impact of a four-month drought in 2009 that further degraded poor soil.

The recent flash flood that hit the dry zone, leaving a reported 161 people missing or dead and another 2,657 households homeless, has raised additional food security concerns due to loss of livestock, seeds and household food reserves, according to a 4 November report by the UN Office for the Coordination of Humanitarian Affairs in Myanmar. (IRIN)