Haze over the Bay of Bengal

By early November 2011, haze had hovered along the southern slopes of the Himalaya for days. The river of haze flowed toward the southeast along the mountain range, and turned southward over Bangladesh. On November 7, 2011, the Moderate Resolution Imaging Spectroradiometer (MODIS) on NASA’s Terra satellite captured this natural-color image of haze over Bangladesh and the Bay of Bengal: 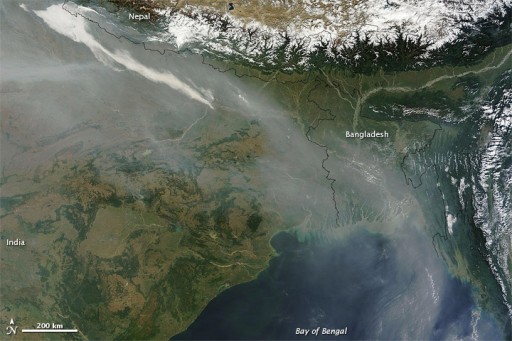 Farmers in northwestern India frequently set agricultural fires at this time of year, and those fires no doubt contribute to the haze. Other factors in the mixture likely include urban and industrial pollution. (EarthObservatory)