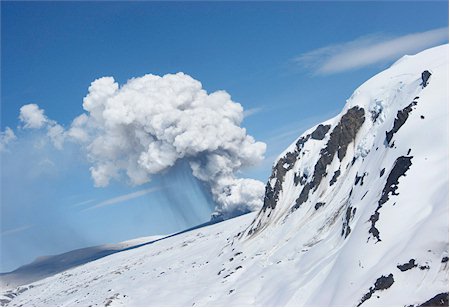 Cerro Hudson volcano, a Southern  Andean volcano  located in the border area in between Chile and Argentina has started a minor eruption. SERNAGEOMIN, the Chilean authority who is guarding the activity of the volcanoes has increased the alert level from 3 to 5 (Red Alert).

Onemi, the Chile government organization who is coordinating all actions to protect people and infrastructure from being damages /injured has called the RED alert for the following localities : Aysén, Río Ibáñez and Chile Chico in the Aysén area.

The Volcano Observatory of the Southern Andes (OVDAS), National Service of Geology and Mining (SERNAGEOMIN) – reports the activity of Hudson volcano Change volcanic alert to Level 5 – RED: an impending major eruption in hours / days. The Hudson volcano eruptions are characterized by eruptive columns several km in height. The dispersion of this material in the atmosphere could affect localities to N, E and S of the volcano. Unlike most volcanoes in other regions of Chile, Aysen population centers are situated downwind of volcanic centers and therefore are highly likely to receive pyroclastic material falling Because the mass of ice nestled in the boiler the generation of lahars has been conspicuous during the eruptions of the volcano, mainly affecting the river valleys and Cupquelan Huemules, located to the NW of the volcano. On the other hand the remobilization of unconsolidated material could generate secondary lahars in the valleys fall of pyroclasts accumulate (typically Ibáñez River valley, to the SE of the volcano). pyroclastic flows could affect the immediate vicinity of the boiler, within approximately between 15-20 km, depending on the magnitude. After the earthquake swarm occurred the morning of Wednesday October 26, SERNAGEOMIN staff and local authorities today conducted a flyby in Hudson Volcano, which could see a column of gases, white and with little ash, about 1.5 km in height, with the subsequent formation of the Rio Huemul lahars. Could not find the outpouring of lava, but keep in mind that the subglacial eruption occurred 1973 (end of magmatic material) (Naranjo, personal comm.). This suggests a process of opening the system at shallow levels and beginning of an eruptive process that is still lower, which can evolve into a major eruption in hours and / or days. (SERNEGEOMIN Report)

SERNAGEOMIN increased the volcanic alert Level 3 to Level 5 RED imminence of a major eruption in hours / days . In consideration of the evidence presented and in accordance to the complementarity of the National Civil Protection System for Volcanic Activity, ONEMI up the Yellow Alert and proceeded to declare red alert for the communities of Aysen, Chile Rio Ibanez and Chico in the Aysen region.   It continues SERNAGEOMIN continuous monitoring of the volcano in line, and the Regional Bureau ONEMI maintain the coordination with the members of Civil Protection System to alert a timely and adequate response to any emergency volcanic product of the condition . (Onemi Report)

RED ALERT: Set when the event grows in size and severity and, therefore, threatens the life, health, property and environment, requiring a total mobilization resources and readiness to act and maintain control of the situation. (When warned that a serious emergency can lead to disaster)

Both organizations will of course follow up the situation of Cerro Hudson 24 hours on 24 and 7 days on 7. Due to the remote location of this volcano, the reporting from the eruptions will be far less than it was the case with the Puyehue – Cordón Caulle. 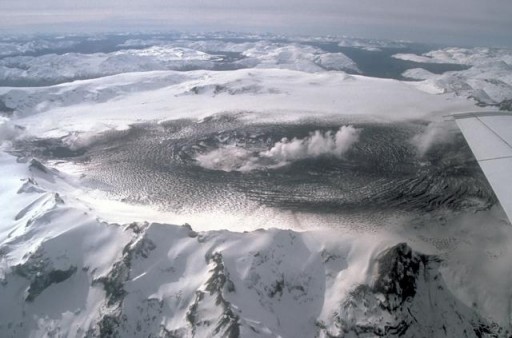 The ice-filled, 10-km-wide caldera of the remote Cerro Hudson volcano was not recognized until its first 20th-century eruption in 1971.  Cerro Hudson is the southernmost volcano in the Chilean Andes related to subduction of the Nazca plate beneath the South American plate. The massive, 1905-m-high Cerro Hudson covers an area of 300 sq km. The compound caldera is drained through a breach on its NW rim, which has been the source of mudflows down the Río de Los Huemeles.
Two cinder cones occur north of the volcano and others occupy the SW and SE flanks. Hudson has been the source of several major Holocene explosive eruptions. An eruption about 6700 years ago was one of the largest known in the southern Andes during the Holocene; another eruption about 3600 years ago also produced more than 10 cu km of tephra. An eruption in 1991 was Chile’s second largest of the 20th century and formed a new 800-m-wide crater in the SW part of the caldera. (GVP) 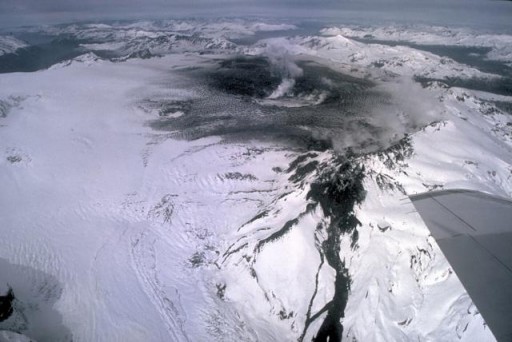 Mount Hudson (locally known as Cerro Hudson) is a stratovolcano in southern Chile, and the site of one of the largest eruptions in the twentieth century. The mountain itself is covered by a glacier. There is a caldera at the summit from an ancient eruption; modern volcanic activity comes from inside the caldera. Mount Hudson is named after Francisco Hudson a 19th century Chilean Navy hydrographer.
Large eruptions around 4750 BCE and 1890 BCE are believed to have been of Volcanic Explosivity Index (VEI) 6; these are probably responsible for the large caldera. The 4750 BCE eruption may have wiped out many if not all groups of early man living in central Patagonia at that time, based on evidence from the Los Toldos archaeological site. Recently, the volcano has had moderate eruptions in 1891 and 1971 as well as a large eruption in 1991.
1971 eruption
Before 1970, little was known about the mountain. Minor eruptive activity began in 1970 and melted parts of the glacier, raising river water levels and leading to the identification of the caldera. In August-September 1971, a moderate eruption (VEI 3) located in the northwest area of the caldera sent ash into the air and caused lahars from the melting of a large portion of the glacier. The lahars killed five people; many more were evacuated. 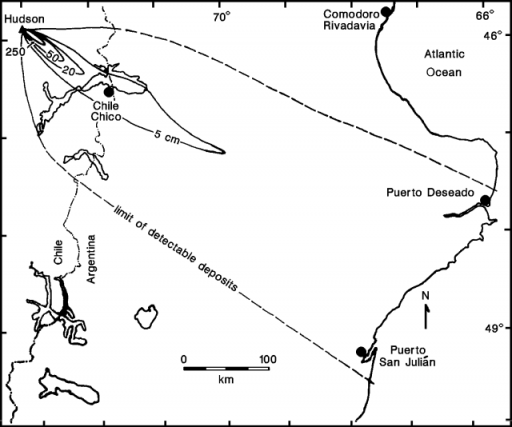 1991 eruption
The eruption in August to October 1991 was a large plinian eruption with a VEI of 5, that ejected 4.3 km3 bulk volume (2.7 cubic km of dense rock equivalent material). Parts of the glacier melted and ran down the mountain as mud flows (see glacier run). Due to the remoteness of the area, no humans were killed but hundreds of people were evacuated from the vicinity. Ash fell on Chile and Argentina as well as in the South Atlantic Ocean and on the Falkland Islands.
In addition to the ash, a large amount of sulfur dioxide gas and aerosols were ejected in the eruption. These contributed to those already in the atmosphere from the even larger Mount Pinatubo eruption earlier in the year and helped cause a worldwide cooling effect over the following years. Ozone was also depleted, with the Antarctic ozone hole growing to its largest levels ever recorded in 1992 and 1993. As a result of the Pinatubo eruption, the Hudson eruption received little attention at the time. (Wikipedia)