Due to potentially high-volume rainfall produced by Tropical Storm "Choi-wan" — known as Dante in the Philippines" — and its trajectory, DOST-PHIVOLCS has issued lahar advisories for Taal and Pinatubo volcanoes on June 2, 2021.

Due to its trajectory and potentially high-volume rainfall, Choi-wan (Dante) can be expected to generate volcanic sediment flows or lahars, muddy streamflows or muddy run-off in rivers and drainage areas on the monitored active volcanoes of Taal and Pinatubo. DOST-PHIVOLCS thus strongly recommends increased vigilance and readiness of communities in pre-determined zones of lahar and related hazards on these volcanoes.

Pinatubo lahars will likely be channel-confined and occur on the upper to middle reaches of the Sto. Tomas- Marella and Bucao River systems but may transition to muddy streamflows and floods on the lower reaches and affect adjacent communities of San Marcelino, San Narciso, San Felipe, and Botolan, Zambales Province.

Muddy streamflows may likewise be generated along the O’Donnell and Pasig-Potrero River systems draining the Pinatubo edifice to the north and southeast, respectively, and affect downstream communities in Tarlac and Pampanga Provinces.

Prolonged and heavy rainfall may also generate muddy streamflow and muddy runoff around Taal Volcano, particularly on the slopes west of Taal Lake where thin remnant ash can be remobilized in streams and roads and overland of the lakeward slopes.

In particular, muddy streamflow and runoff can recur on previously affected communities of Agoncillo and Laurel, Batangas Province.

DOST-PHIVOLCS strongly advises the communities and local government units of the above-identified areas of risk to continually monitor the tropical storm conditions and take pre-emptive response measures for their safety from the storm. 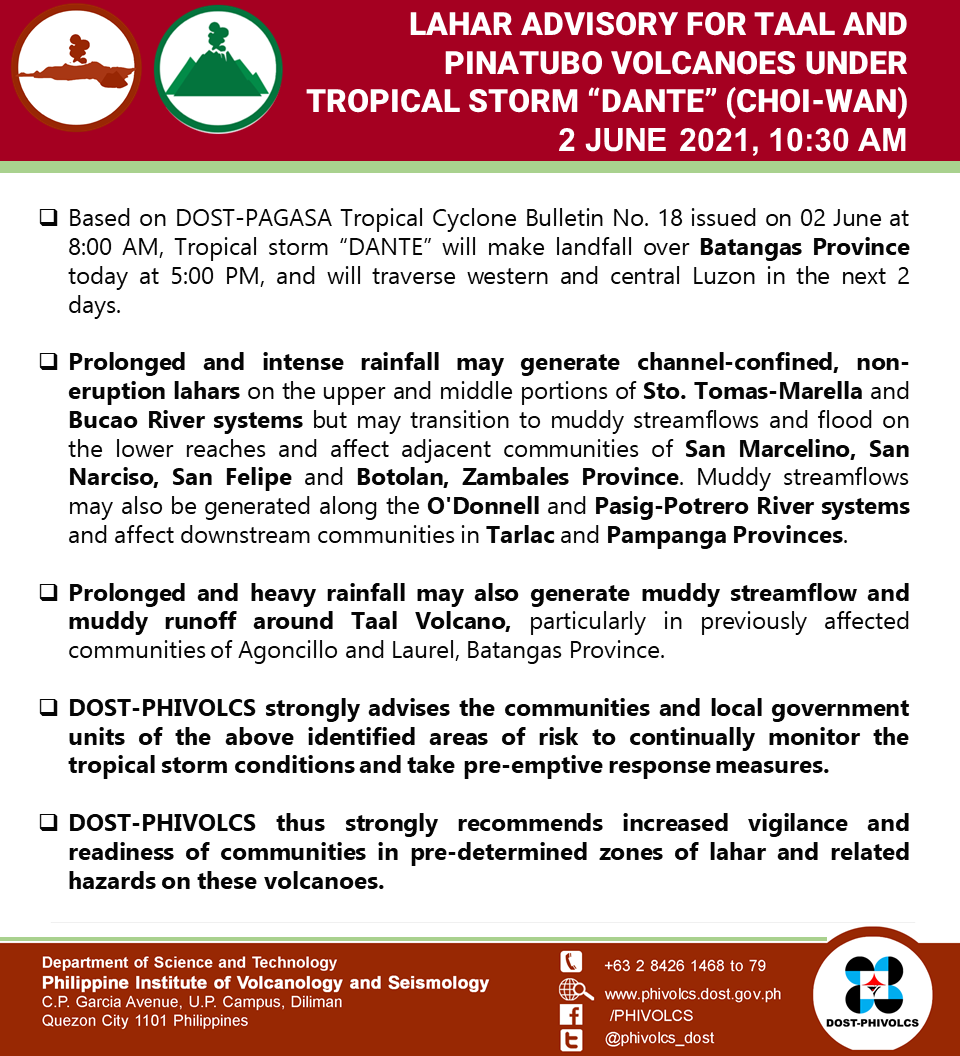