USGS has changed its numbers to the positive side : 7.3 gets 7.2 and the depth of 7 km is updated to 20 km. This is at least a weakening message. Still very dangerous and violent though. 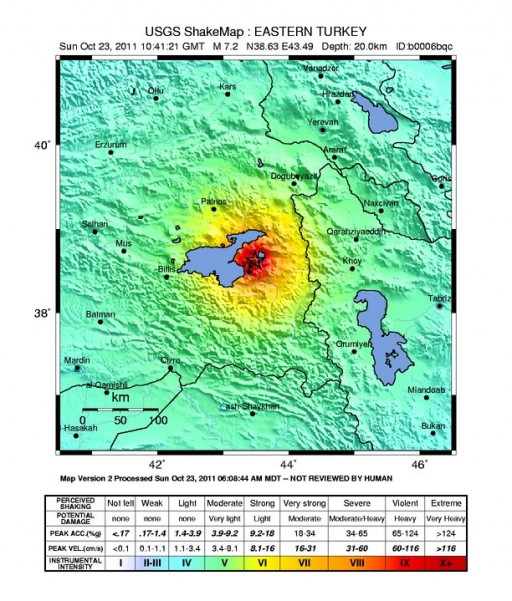 The epicenters of the Van quake are quite different between USGS and KOERI (Turkish). USGS shows that Van is more at risk than Ercis – with 3 felt reports giving an intensity of 9. KOERI shows it closer to Ercis.

33 aftershocks between 2.9 and 5.6 followed.  Estimates of loss of life are 700-1000 according to Prof. Erdik, who is in charge of the ELER program.  Town of Bitlis has also reported some destroyed buildings (Bitlis is approx. 100 km from the epicenter). Death toll in the many villages in between could become very high too. Other earthquake loss estimation procedures are reporting much heavier losses.

PAGER (USGS) is estimating around 12,000 median deaths, with around $15 billion damage. Please refer to their whole range of estimates, as there is a large uncertainty at this point. We want to emphasize that these numbers are PRELIMINARY THEORETICAL numbers, based on the measured data and the historic earthquakes in the area. 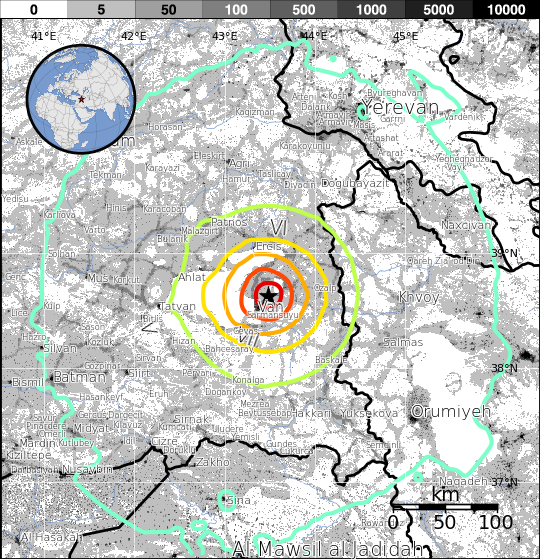 The 1976 earthquake on the Iranian-Turkish border was a M7 and killed around 5000 people. If we are looking at a direct hit on Van, the highest death percentage likely is around 6-10%, which could mean values of dead around the Izmit earthquake – between 19000-38000 dead. 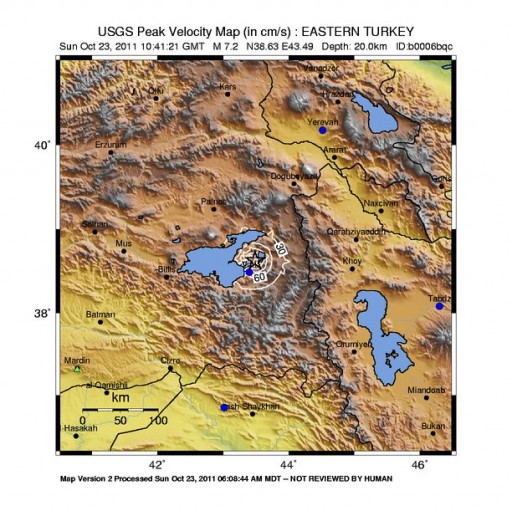 The cold weather is also affecting people and the need for shelter as night falls becomes a major concern for residents. Many people will sleep in the streets scared to return to their homes.

This video shows that the shaking was very violent.

Deputy Prime Minister Bashir Atalay: “According to information received from Area around 10 buildings were destroyed in the center of Van. Another 25-30 buildings and a dormitory building was destroyed in Ercis. Additional damage may be found in the villages. especially some of the villages attached to the hub there may be more damage. The Prime Minister and Emergency Management and Red Crescent in the region noted Atalay Airlines plane with 160 people and a military aircraft to bring relief supplies to the region has been sent“

Golcuk had a fatality ratio of 3.33 % in the earthquake in 1999, being subjected to around the same distance as this earthquake  epicentre as Ercis. Based on these percentages an estimate of around 4000 could be expected. However, different building typologies are used in Eastern Turkey as compared to Western Turkey. According to Coburn et al. (1987) most rural buildings in the Van region are made out of rubble or adobe masonry. Traditionally masonry buildings collapse with the ground motions that we have seen in Van/Ercis. (EarthquakeReport)