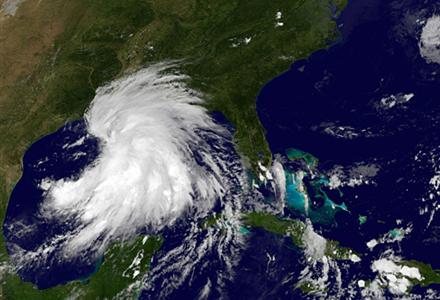 Tropical Storm Lee lurched toward the US Gulf Coast on Saturday, dumping heavy rain on Louisiana and threatening extensive flooding that will put the New Orleans levee system to the test. Oil companies evacuated workers from offshore rigs ahead of the arrival of Lee, a disorganized but major rainmaker, while Louisiana Governor Bobby Jindal declared a state of emergency.

Officials warned the slow-moving storm could bring the same kind of flooding that residents in the northeast are still grappling with after Hurricane Irene hit a week ago, leaving nearly 50 people dead and millions without power. With experts forecasting that Lee will turn to the northeast and push inland, one of the biggest dangers from the storm could be in the Appalachians.

At 18:00 GMT Saturday, Lee was stalled off the coast, just 45 miles (75 kilometers) southwest of Morgan City, Louisiana, packing sustained winds of 60 miles per hour, the NHC said. With some areas forecast to receive up to 20 inches of rain over the Labor Day holiday weekend, residents of coastal states as well as landlocked Kentucky and Tennessee should prepare themselves for extensive flooding.

Lee was battering the Gulf Coast six years after the region was devastated by Hurricane Katrina. The levee system around New Orleans failed after Katrina, putting much of the city underwater. More than 1,500 people died.

The intense rain that Lee is already dumping on the city is expected to provide the most severe test of the levee and canal systems at Lake Pontchartrain and elsewhere since Hurricane Gustav came close to overwhelming the levees three years ago. Mississippi Governor Haley Barbour has declared a state of emergency in several counties, urging residents to prepare well in advance.

US forecasters are also monitoring Hurricane Katia in the Atlantic Ocean. Forecast models vary, and Katia is still well out to sea, but some tracks show the hurricane nearing and perhaps clipping the US eastern seaboard sometime next week. (TerraDaily)