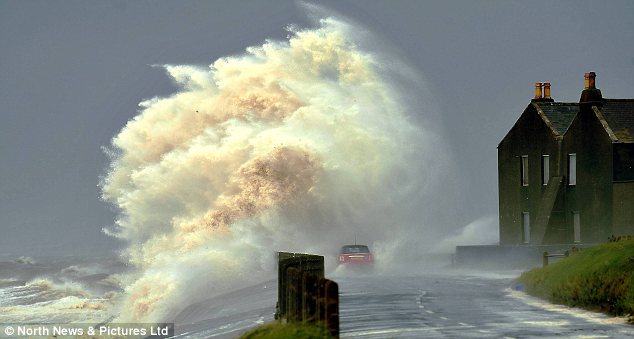 The Met Office has issued a yellow severe weather warning today for the north of England, Northern Ireland and Scotland before the winds die down tomorrow. The gales, the tail-end of Hurricane Katia, hit Britain yesterday morning, bringing the worst storms since the remnants of Hurricane Lili wreaked havoc in 1996. 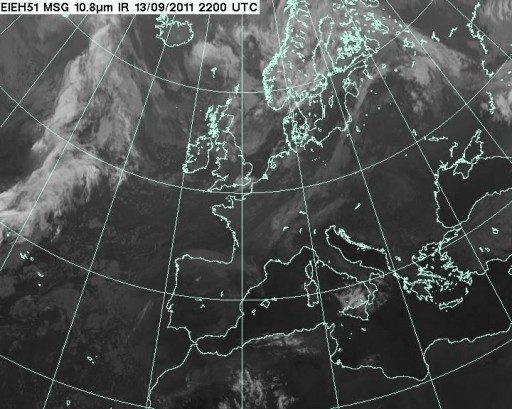 ‘High tides and the full moon mean there is a higher risk of tidal flooding.’ The Environment Agency yesterday issued nine flood alerts for the north-west coast from Morecambe Bay in Cumbria down to Blackpool, North Wales and Anglesey, and one for the north-east coast at Bridlington in Yorkshire.

The worst conditions were in northern and western parts of England and central and southern Scotland. The Environment Agency issued flood alerts for the North East, North West and Wales.

Coastal areas have been at greatest risk of flooding with strong winds to gales, large waves and a surge coinciding with high tides. (DailyMail) 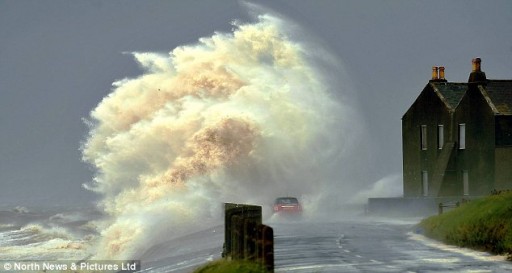 Parts of Scotland are being battered by storm-force winds as the remnants of Hurricane Katia hit the UK. People have been urged to stay away from exposed coastal areas.

Fallen trees have been causing some disruption on the roads and railways and hundreds of homes are without power in Ayrshire and Dumfries and Galloway. Gusts of up to 85mph (137km/h) have been recorded. The Met Office issued an amber alert, warning possible damage to trees and structures. The highest wind speed was recorded at Glen Ogle in the southern Highlands.

At Glasgow Airport gusts of 72mph (116km/h) were recorded and in Edinburgh gusts reached up to 76mph (122km/h). Heavy rain was an additional hazard for western Scotland, with as much as 50mm (2in) to 100mm (4in) expected in places.

The Met office said it was an unusually early storm for Scotland, which meant there was a greater risk of uprooted trees since they still had leaves on them. This risk has been heightened by a period of wet weather, which has left the soil very wet. (BBC) 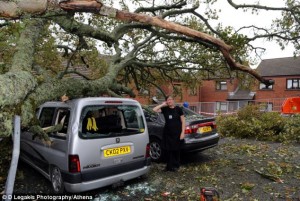 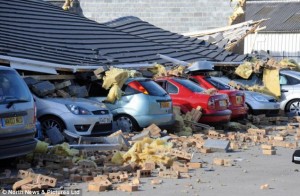 Britain is braced for another day of storms as the remnants of Hurricane Katia continue to batter vast swathes of the country today. Severe weather warnings have been issued for Scotland and northern England, with winds expected to reach 60mph later in the day. Blackouts, falling masonry, downed trees and transport chaos struck as gales reached 82mph in Wales and the mid-70s in the north of England, reviving memories of the Great Storm of 1987.

An amber alert – the second-highest of four warning levels – had been issued by the Met Office for much of the country as roads were closed and ferry services cancelled.

Thousands of homes, shops and businesses across central England were blacked out for hours as wind speeds of more than 50mph damaged an overhead power line. Central Networks said 2,000 homes in Oxfordshire, Northamptonshire, Derbyshire and Gloucestershire were left without electricity.

Hurricanes are creatures of the tropics, they need the warmth and humidity of tropical seas to develop and survive. The core of the storm consists entirely of warm air and it’s the release of latent heat as this air rises and condenses into clouds which gives the hurricane its power. It’s a bit like a pan of water coming to the boil as you apply heat from below.

Once formed, a hurricane moves through the surrounding atmosphere like a cork floating down a stream, becoming almost a separate entity. The strongest winds form in the lowest layers of the storm, close to the storm’s centre just outside the eye.

Move into temperate latitudes and weather works differently. Extratropical storms (more commonly known as mid-latitude depressions) form over much colder waters and get their energy instead from the contrast between masses of warm and cold air. The bigger the contrast, the stronger the storm. Cold air makes up the core, digging under the warmer air mass and lifting it until it forms clouds and rain along a front.

The storm becomes an integral part of the atmospheric circulation, like an eddy in a river. Strongest winds are found high up, in the form of the jetstream, at around 30,000ft while the strongest surface winds tend to occur at some distance from the storm’s centre and are spread out over an elongated area. All very different to a hurricane.

Where it gets messy is when a hurricane heads out of the tropics and into higher, temperate latitudes. It goes through an identity crisis as the supply of warmth from below is cut off and cold air is drawn into the circulation, eventually emerging as an extratropical storm after a fuzzy intermediate stage.

Fortunately, the long sea track ensures that any ex-hurricanes reaching the UK have gone through full transition before they arrive. The different amounts of available energy mean that even the most powerful of extratropical storms would barely make it onto the bottom of the hurricane scale. (BBCWeather)