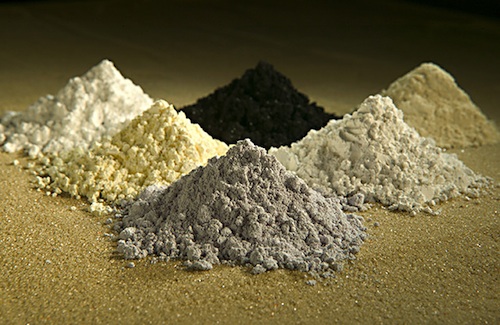 The relative risks to the supply of some of Earth's rarest elements have been detailed in a new list published by the British Geological Survey (BGS). So-called "technology metals" like indium and niobium are extracted from the Earth and are used in a wide range of modern digital devices and green technologies. They are therefore increasingly in demand from global industries. The list highlights 52 elements most at risk from "supply disruption".

Incorporating information about each metal's abundance in the Earth, the distribution of its deposits, and the political stability of the country in which it is found, the list ranks these highly desired elements on a relative scale. Speaking at the British Science Festival in Bradford, Andrew Bloodworth from the BGS explained that "while we won't run out of these metals any time soon, the risks to supply are mostly human".

Geopolitics, resource nationalism, accidents, and the lengthy delay between the discovery of a resource and its efficient extraction are all factors that could threaten the supply of the metals on which our modern technology has come to rely. This is an especially important factor, given the notable monopoly that certain countries have on supply.

For example, 97% of all rare earth elements (REEs), including neodynium and scandium, are produced in China. 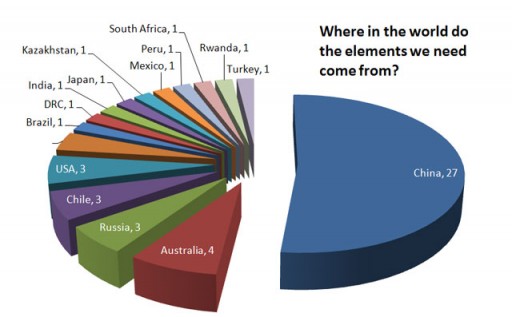 Antimony, the element most "at risk", is used extensively for fire proofing, but is deposited by hot fluids inside the Earth's crust and extracted mostly in China. In fact, China dominates global production of all the elements on the BGS list, being responsible for extraction of over 50% of them.

There are many more locations on Earth where these critical metals can be mined, including varied geological deposits from Southern Africa, Australia, Brazil, and the US. Professor Frances Wall of the Camborne School of Mines said that mining these alternative deposits would "take away the monopoly of current suppliers of these metals".

In the move towards a more low-carbon economy, digital and renewable energy technologies rely heavily on metals which, just 10 years ago, would have been of little interest to industry. Today, these elements are ubiquitous, being used widely in smart mobile devices, flat screens, wind turbines, electric cars, rechargeable batteries and many others. 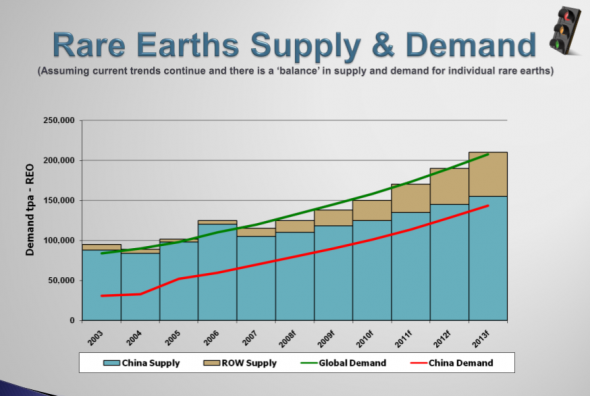 Mobile phones embrace the use of these technology metals, with lithium batteries, indium in the screen, and REEs in the circuitry. With over 50 million new phones being made every year, the "volume of technology metals required is astonishing and the pace of demand is not letting up" said Alan McLelland of the National Metals Technology Centre.

Recycling of the metals used in phones is currently too expensive and energy-intensive, but Mr McLelland hopes that the risks outlined in the BGS list will alert the manufacturers to the need to make the embedded metals more accessible for recycling. As the supply and demand of the elements change, the BGS anticipates the list being updated annually. (BBC)

Despite their name, rare earth elements (with the exception of the radioactive promethium) are relatively plentiful in the Earth's crust, withcerium being the 25th most abundant element at 68 parts per million (similar to copper). However, because of their geochemical properties, rare earth elements are typically dispersed and not often found in concentrated and economically exploitable forms known as rare earth minerals. It was the very scarcity of these minerals (previously called "earths") that led to the term "rare earth". The first such mineral discovered was gadolinite, a compound of cerium, yttrium, iron, silicon and other elements. This mineral was extracted from a mine in the village of  Ytterby  in Sweden; many of the rare earth elements bear names derived from this location. (Wikipedia)