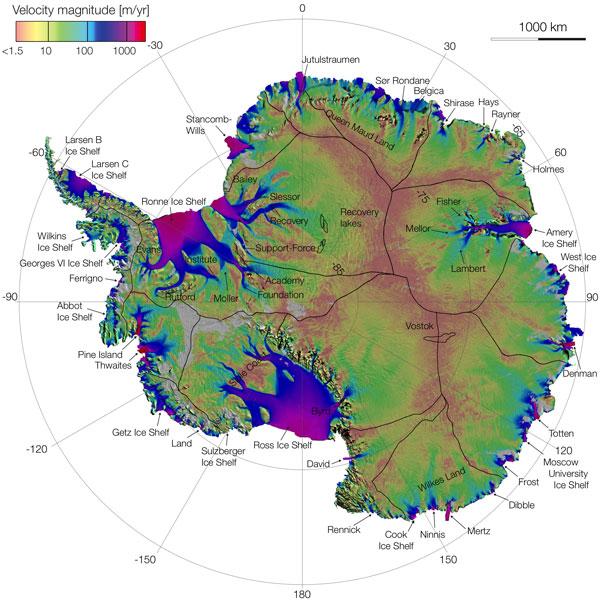 High above the earth, satellites are now mapping ice flows in the Antarctic, providing vital information on the progress of climate change for the first time.

NASA funded the researchers, who published their results this week in Science Express. The map they have created shows glaciers as they snake their way from the desolate Antarctic interior to the southern oceans.

“This is like seeing a map of all the oceans’ currents for the first time. It’s a game changer for glaciology,” said Eric Rignot of NASA’s Jet Propulsion Laboratory in Pasadena, and the University of California. “We are seeing amazing flows from the heart of the continent that had never been described before.“

Scientists used a network of European, Japanese and Canadian satellites to build an accurate picture from billions of data points to see through cloud, avoid the glare of the sun and work around obstacles on land. Now, they’ve shaped their information into a map of glacial movements, including the vast East Antarctica which has never before been charted.

The team found new formations in the vast continent, including a ridge that splits the 5.4 million-square-mile (14 million-square-kilometre) landmass from east to west and unnamed glaciers moving at 800 feet a year towards the sea.

The map points out something fundamentally new: that ice moves by slipping along the ground it rests on. That’s critical knowledge for predicting future sea level rise. It means that if we lose ice at the coasts from the warming ocean, we open the tap to massive amounts of ice in the interior. (EarthTimes) 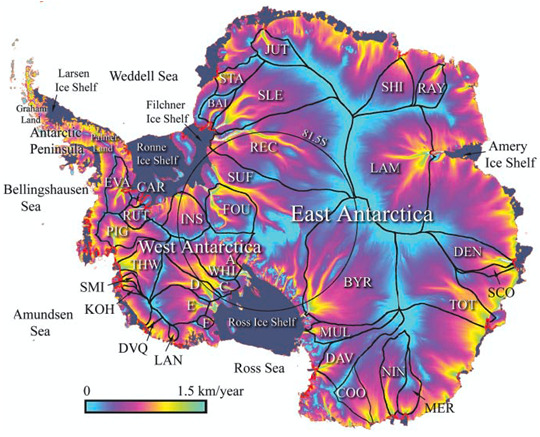 Since the vast majority of Earth’s ice is located on Antarctica, and melting polar ice sheets could potentially dramatically raise sea level, the new digital mosaic released today could help researchers understand how Antarctica might change under the steadily warming global climate.

Antarctica’s ice sheet is made up of glaciers, which are essentially slowly flowing rivers of ice. The glaciers end in ice shelves, which float on the ocean’s surface and occasionally spawn icebergs. Conventionally, ground-based stations measure Antarctic ice movements, but there are relatively few stations compared with the size of the southernmost continent, which has led to an incomplete picture of these motions.

To look over all of Antarctica, the new map incorporated high-resolution satellite radar data of the continent’s ice flows from the Canadian Space Agency, the European Space Agency and the Japan Aerospace Exploration Agency between 2007 and 2009.

It reveals that ice motions on Antarctica depend mostly on a vast, complex network of narrow rivers of ice reaching hundreds of miles over the whole of the continent. 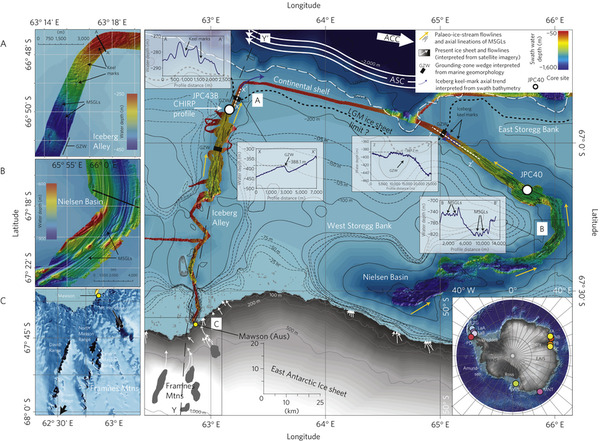 Ice flows through these previously unmapped glaciers at rates averaging about 100 feet (30 meters) per year; the flow is caused by the ice sheets sliding on their rocky beds. Surprisingly, these motions are twice as fast as flows that happen over a wider area when the ice sheets warp their shape to ooze across the surface, which scientists had thought played the lead role for ice movements on the continent.

The dominant role that such tributaries have in Antarctica is likely a common feature of ice sheets, researchers added. The other major ice sheet on Earth is the one that covers Greenland.

Both of these ice sheets are important potential contributors to sea level rise in a warming world. (OurAmazingPlanet)