The clouds parted over the northeast Barents Sea region of the Arctic Ocean in late summer, 2011 allowing a view of the ice-covered islands of Franz Josef Land, Russia forming a stark-white contrast to the surrounding dark sea water. The Moderate Resolution Imaging Spectroradiometer (MODIS) aboard the Terra satellite captured this true-color image on August 14, 2011. 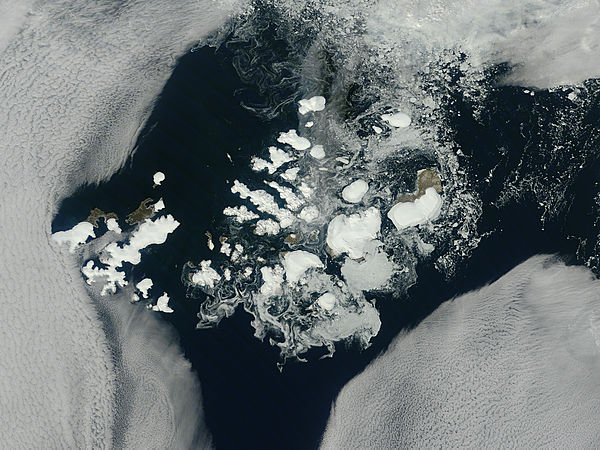 Franz Josef Land is an archipelago of 6 main islands and about 135 small islands, with a total landmass of about 16,134 square kilometers (6,229 square miles). The terrain is primarily elevated table lands and low hills, with the highest point rising to 620 m (998 mi).

The glaciers on the islands of Franz Josef are currently in a state of retreat, and in this image large areas of the main islands clearly appear ice free. However, up to 85% of the island’s landmass is permanently ice-covered, with an average ice thickness of about 180 m (590 feet). On Graham Bell Island (the large island on the eastern edge of the group, the Windy Dome Ice Cap reaches a depth of greater than 500 m (1,640 feet). Although it is late summer, sea ice can still be seen surrounding many of the islands. (MODIS)