A retreat of the massive Kaskawulsh Glacier in northern Canada has caused the Slims River to change its course and join the Kaskawulsh River on its way toward to the Gulf of Alaska. It is the first known case of what is known as 'river piracy' in modern times.

Over the past century, Kaskawulsh Glacier has retreated about 1.6 km (1 miles) up its valley, but last spring, its retreat triggered a geologic event at relatively breakneck speed. The toe of ice that was sending meltwater toward the Slims River and then north to the Bering Sea retreated so far that the water changed course, joining the Kaskawulsh River and flowing south toward the Gulf of Alaska.

This capture of one river’s flow by another, documented in a study led by the University of Washington Tacoma and published April 17 in Nature Geoscience, is the first known case of “river piracy” in modern times.

“Geologists have seen river piracy, but nobody to our knowledge has documented it happening in our lifetimes,” said lead author Dan Shugar, a geoscientist at the University of Washington Tacoma. “People had looked at the geological record — thousands or millions of years ago — not the 21st century, where it’s happening under our noses.” 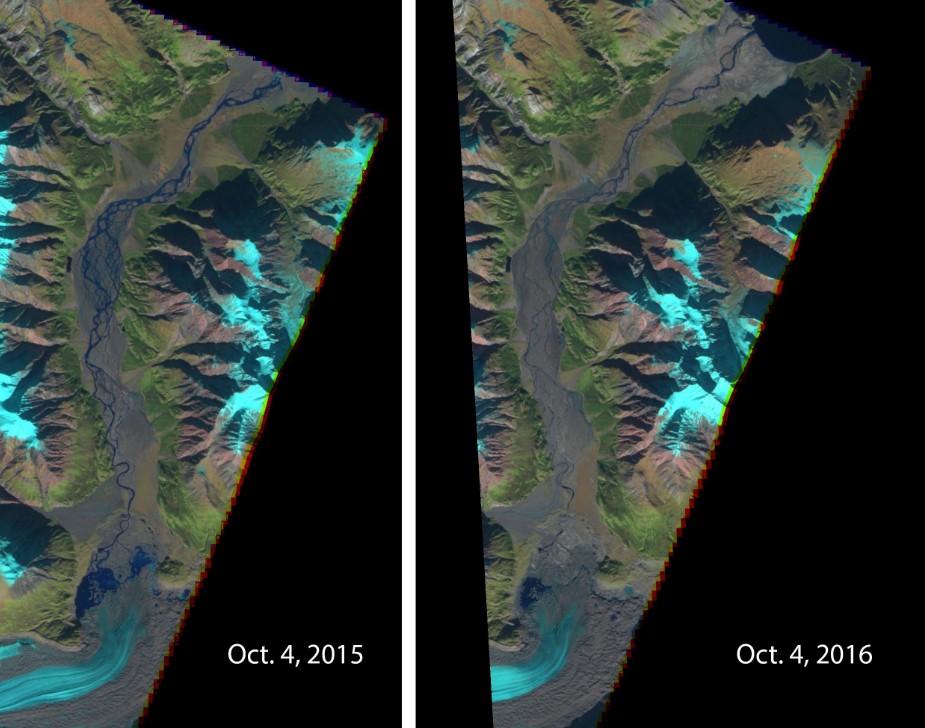 River piracy, also known as stream capture, can happen due to tectonic motion of Earth’s crust, landslides, erosion or, in this case, a change in a glacial dam. The new study documents one of the less-anticipated shifts that can occur in a changing climate.

Shugar and co-authors Jim Best at the University of Illinois and John Clague at Canada’s Simon Fraser University had planned fieldwork last summer on the Slims River, a geologically active system that feeds Kluane Lake in the Yukon. When they arrived in August, the river was not flowing. River gauges show an abrupt drop over four days from May 26 to 29, 2016.

By late summer, “there was barely any flow whatsoever. It was essentially a long, skinny lake,” Shugar said. “The water was somewhat treacherous to approach, because you’re walking on these old river sediments that were really goopy and would suck you in. And day by day we could see the water level dropping.”

The research team puzzled about what to do next. They got permission to use their mapping drone to create a detailed elevation model of the glacier tongue and headwater region. The resulting paper is a geological postmortem of the river’s disappearance.

“For the last 300 years, Slims River flowed out to the Bering Sea, and the smaller Kaskawulsh River flowed to the Gulf of Alaska. What we found was the glacial lake that fed Slims River had actually changed its outlet,” Shugar said. “A 30-meter (100-foot) canyon had been carved through the terminus of the glacier. Meltwater was flowing through that canyon from one lake into another glacial lake, almost like when you see champagne poured into glasses that are stacked in a pyramid.”

That second lake drains via the Kaskawulsh River in a different direction than the first. The situation is fairly unique, Shugar said, since the glacier’s toe was sitting on a geologic divide. 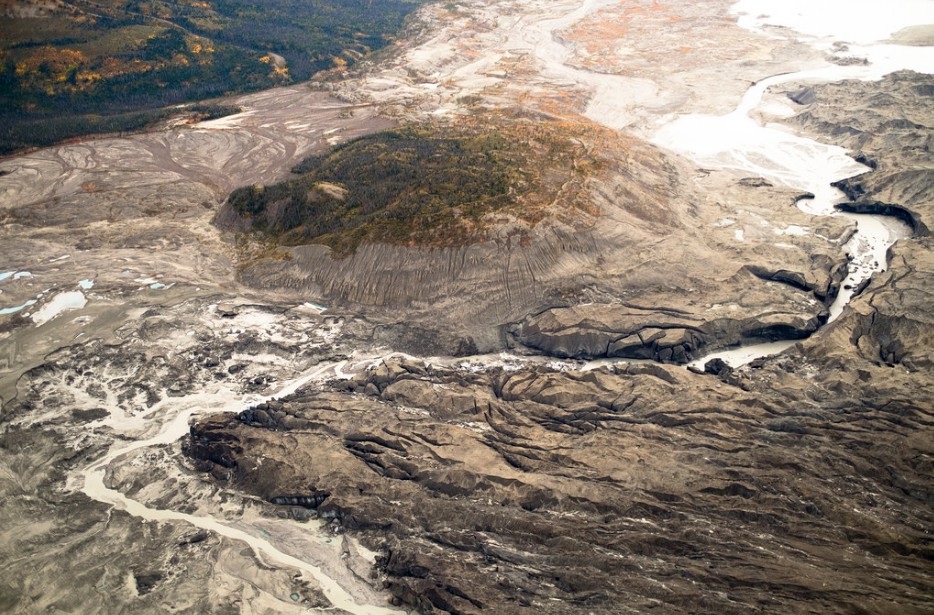 An aerial view of the ice canyon that now carries meltwater from the Kaskawulsh Glacier, seen here on the right, away from the Slims River and toward the Kaskawulsh River. Credit: Dan Shugar/University of Washington Tacoma 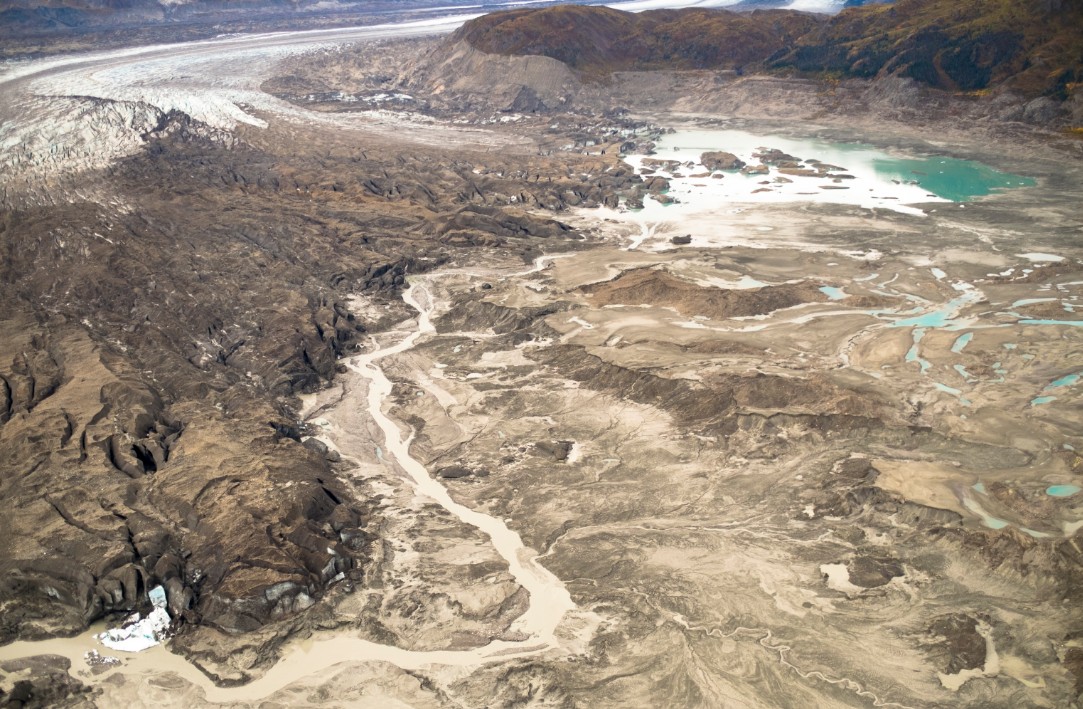 A September 2, 2016 aerial photo shows the meltwater stream along the toe of Kaskawulsh Glacier, seen on the left, that is diverting fresh water from one river to the other. Credit: Dan Shugar/University of Washington Tacoma

Clague began studying this glacier years ago for the Geological Survey of Canada. He observed that Kluane Lake, which is Yukon’s largest lake, had changed its water level by about 12 meters (40 feet) a few centuries ago. He concluded that the Slims River that feeds it had appeared as the glacier advanced, and a decade ago predicted the river would disappear again as the glacier retreated.

“The event is a bit idiosyncratic, given the peculiar geographic situation in which it happened, but in a broader sense it highlights the huge changes that glaciers are undergoing around the world due to climate change,” Clague said.

The geologic event has redrawn the local landscape. Slims River crosses the Alaska Highway, and its banks were a popular hiking route. Now that the riverbed is exposed, Dall sheep from Kluane National Park are making their way down to eat the fresh vegetation, venturing into territory where they can legally be hunted. With less water flowing in, Kluane Lake did not refill last spring, and by summer 2016 was about 1 meter (3 feet) lower than ever recorded for that time of year.

Less input from the Slims River has lowered the water level of Kluane Lake, the largest lake in the Yukon, exposing sediments and creating dust storms. Credit: Jim Best/University of Illinois

Waterfront land, which includes the small communities of Burwash Landing and Destruction Bay, is now farther from shore. As the lake level continues to drop researchers expect this will become an isolated lake cut off from any outflow. 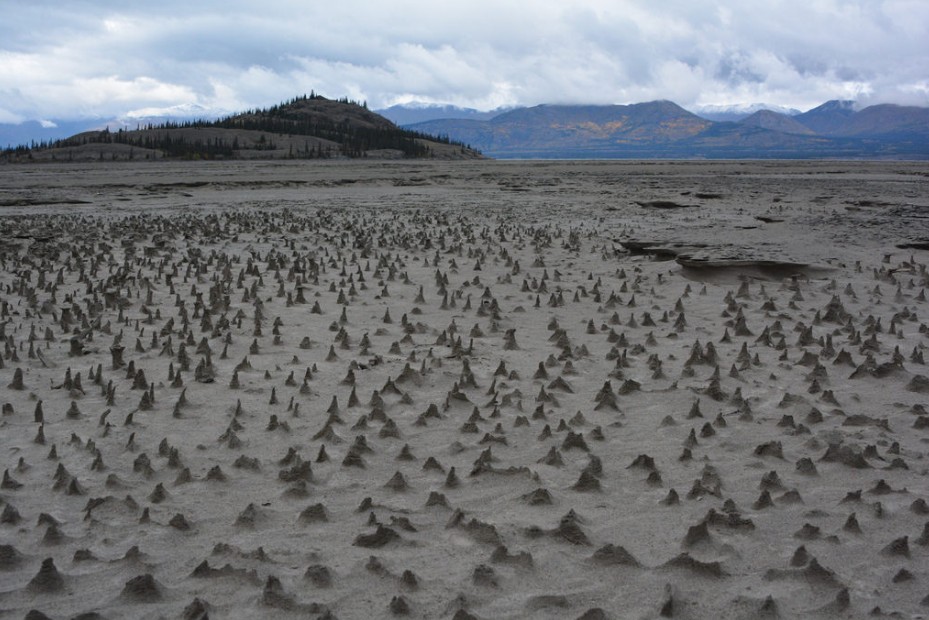 Sections of the newly exposed bed of Kluane Lake contain small pinnacles. Wind has eroded sediments with a harder layer on top that forms a protective cap as the wind erodes softer and sandier sediment below. These pinnacles, just a few centimeters high, are small-scale versions of what are sometimes termed "hoodoos." Credit: Jim Best/University of Illinois

On the other hand, the Alsek River, a popular whitewater rafting river that is a UNESCO world heritage site, was running higher last summer due to the addition of the Slims River’s water.

Shifts in sediment transport, lake chemistry, fish populations, wildlife behavior and other factors will continue to occur as the ecosystem adjusts to the new reality, Shugar said.

“So far, a lot of the scientific work surrounding glaciers and climate change has been focused on sea-level rise,” Shugar said. “Our study shows there may be other underappreciated, unanticipated effects of glacial retreat.”

The Kaskawulsh Glacier is retreating up the valley because of both readjustment after a cold period centuries ago, known as the Little Ice Age, and warming due to greenhouse gases. A technique published in 2016 by UW co-author Gerard Roe shows a 99.5 percent probability that this glacier’s retreat is showing the effects of modern climate change.

“I always point out to climate-change skeptics that Earth’s glaciers are becoming markedly smaller, and that can only happen in a warming climate,” Clague said.