For two and a half months Chile’s Puyehue Cordón Caulle Volcanic Complex has erupted nearly continuously. Since the violent initial stages of the eruption, that hurled pumice tens of kilometers from the eruption site, Puyehue Cordón Caulle has settled into a mild phase. Emissions of fine ash and volcanic gases are accompanied by volcanic tremor— “continuous, rhythmic ground shaking.” 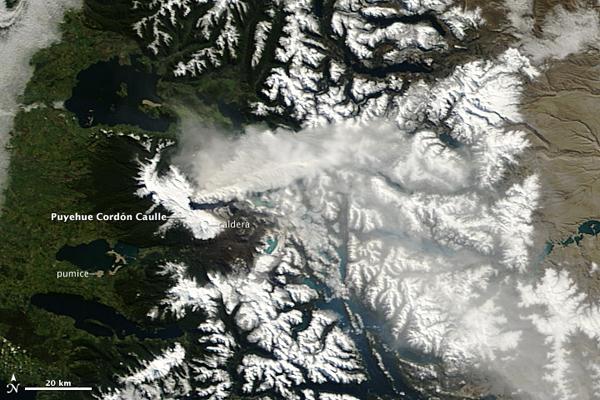 On the morning of August 14, 2011, the volcano emitted an ash plume that streamed east-northeast over Argentina, where it dispersed to the southwest. According to the Joint Air Force & Army Weather Information Network the ash plume reached 12,000 feet (3,700 meters) at the time. The summit of Puyehue (the caldera to the southwest of the active vent) is 7,336 feet (2,236 meters). This natural-color satellite image was acquired on the morning of August 14, 2011, by the Moderate Resolution Imaging Spectroradiometer(MODIS) aboard the Terra satellite. (MODIS)