Hot lava has flown down the eastern slope of  Kizimen volcano, on the Kamchatka Peninsula in the Far East of Russia. The ash plume stretches for 15 kilometers and is a threat to aviation, according to the Institute of Volcanology and Seismology of the Far East District.

Eruption of the volcano continues. Strong ash explosions up to 32,800 ft (10 km) ASL could occur at any time. Ongoing activity could affect international and low-flying aircraft. 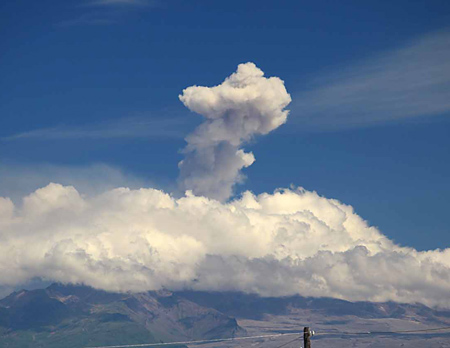 Seismic activity was above background levels all week. Weak volcanic tremor continues to registering all week. According to seismic data, possible ash plumes rose up to 11,480 ft (3.5 km) ASL on July 19-20. According to visual data by seismologists from the area of the volcano, gas-steam plumes containing ash rose up to 9,840 ft (3.0 km) ASL and extended about 9 mi (15 km) to the east from the volcano on July 20. A lava flow continues to moving at the eastern flank of the volcano. A bright thermal anomaly was registering over the volcano all week at satellite images. A powerful gas-steam plume was extending about 32 mi (52 km) to the north-west from the volcano on July 19. (KVERT)