A trained storm spotter reported a waterspout at 8:20pm over Lake Michigan east of Zion, about 45 miles north of Chicago. A wind gust of 81 miles per hour was reported at a water-intake crib about three miles off Chicago’s shoreline, and a 94 miles per hour gust was reported off Waukegan Harbor, about 40 miles north of Chicago. Golf ball-sized hail caused severe damage across parts of northern Illinois.

ConEdison reported a total of 100,000 power outages, which spanned across the north, west and southern suburbs of Chicago. Problems were also reported at the city’s O’Hare and Midway international airports, where flights were delayed 20 to 30 minutes, according to the Chicago Sun-Times Media Wire. Witnesses said a sailing class was also on the water near Montrose Harbor when winds picked up, creating waters so rough that some boats capsized and their crews rescued.

As the storm moved north to Kenosha, Wisconsin, it continued to rage on. A tree snapped, killing a 31-year-old man on a motorcycle. Another woman was treated for a broken him due to high winds; and two other were injured when they touched live wires, CBS Chicago reports. And while severe storms typically give some relief from sweltering summer heat, there was no relief for Chicago residents today; the city was blasted with temperatures of up to 35 degrees Celsius. (DailyMail) 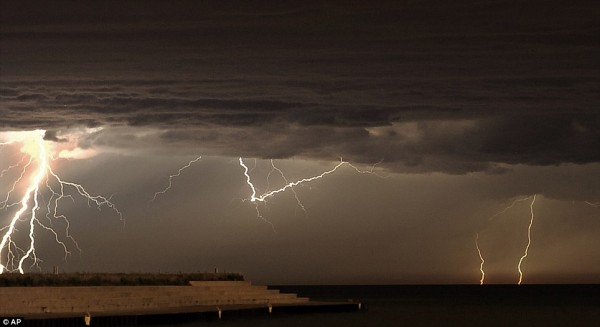