About 14 months after Eyjafjallajökull rumbled to life, another volcano on Iceland began spewing ash and steam. At approximately 17:30 UTC (5:30 p.m. local time) on May 21, 2011, Grímsvötn began to erupt, the Icelandic Met Office reported. The volcano sent a plume of volcanic ash and steam about 20 kilometers (12 miles) above sea level. Overnight, the plume height dropped to 15 kilometers (9 miles), but occasionally re-approached its initial altitude. 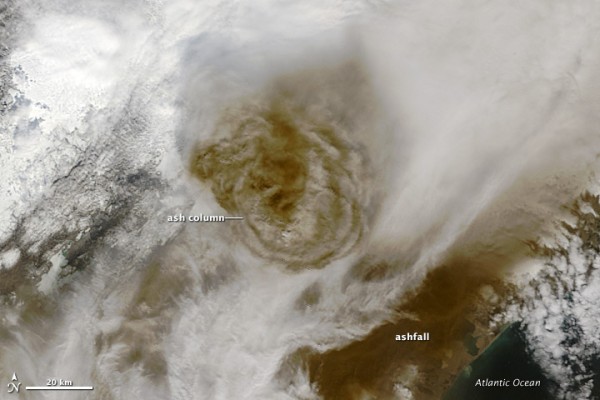 Above Grímsvötn’s summit, volcanic ash forms a roughly circular plume that towers above the surrounding clouds. In the southeast, ash has colored the snow surface dark brown. Ash from the volcano reduced visibility to about 50 meters (160 feet) in some places, the Eruptions blog stated. Iceland Review Online reported that ash falling from the volcano caused some areas turn as dark as night in the middle of the day. The ash plume also prompted the closure of Keflavik, Iceland’s largest airport. 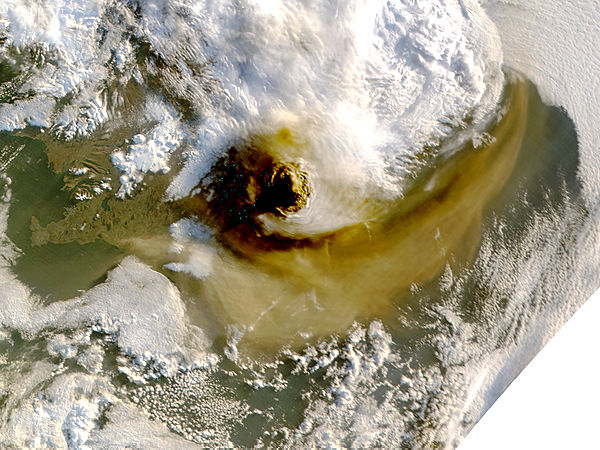 The initial plume from Grímsvötn was higher than that from Eyjafjallajökull, which only reached 8 kilometers (5 miles). Despite its taller plume, Grímsvötn was expected to hamper trans-Atlantic air traffic less than Eyjafjallajökull had, at least in the first 24 hours. Grímsvötn’s ash was forecast to travel toward the northeast, the Icelandic Met Office stated. In addition, the ash content was coarser and therefore less likely to remain airborne long enough to reach European airspace. Some volcanic ash models, however, suggested that Grímsvötn’s ash could interfere with flights in the United Kingdom and Ireland beginning on May 24.

Volcanic plumes can produce lightning, and the plume from Grímsvötn produced an intense lightning storm. At its peak, the lightning storm from this volcano produced 1,000 times as many lightning strikes per hour as Eyjafjallajökull had over a year earlier.

Much of Grímsvötn lies below the Vatnajökull Glacier. Consequently, when the volcano first started erupting in May 2011, the eruption was subglacial. Such eruptions can cause glacier outburst floods, or jökulhlaups. The Icelandic Met Office stated, however, that because an outburst flood had already occurred the previous autumn, a big flood appeared unlikely in the spring of 2011. (EarthObservation)

The ash cloud is still going strong. It is however a bit lower then in first few days. Measurements of the ash plume now says that it is between 5 to 9 km. Because of that it does not appear on the radar at IMO. The ash cloud has now been detected all over Iceland, except for the most western part of Iceland (Westfjod). In the areas closest to the main ash cloud the visibility is from 1 meter and up to 500 meters when it is at it’s best. Ash fall is expected to last for the next few days, or until the crater does not get any water into it to make the ash. The ash cloud is expected to reach Scotland tonight (Rúv, Icelandic). BBC News about cancelled flights due the ash cloud. Farmers live stock has started to die due to the ash cloud. It is unknown how the wild life is doing while the ash cloud covers part of south Iceland. Current output of the Grímsfjall volcano is about 1000 to 2000 tons of ash pr second. It was around 10,000 tons of ash pr second during the first days of the eruption.

Even if the ash cloud is lower now. It appears that the eruption is still going strong. In the evening news at Rúv it was reported that there was a chance the magma that powers this eruption might be from a great depth (more then 20 km). Tremor graphs that are online show and suggest that the eruption is still at full power. The reason why they are at lower noise level is most likely due to fewer explosion in the eruption, as less water is in the crater. When water no longer goes into the crater it turns into lava eruption. There is also an speculation that new fissures might open up in this eruption where there is more glacier cover (evening news on Rúv). But that would mean flash glacier flood and new ash cloud when the eruption would break the glacier covering it. But so far this has not happened and is nothing but a speculation. It would mean earthquake activity when the magma would break the crust, as happened when the eruption did start on May 21, 2011.

According to a report from IMO and the University of Iceland the deflation now has been 50 cm to northwest and has subsided 25 cm. According to the report this about 60% larger then after the eruptions in the year 1998 and in the year 2004.

Grímsvötn Míla web cam is now up and running. It should be possible to see the eruption when an ash cloud is not in the way. But so far that has been the case.

Please note that information here might get outdated really fast and with no warning at all! (jonfr) 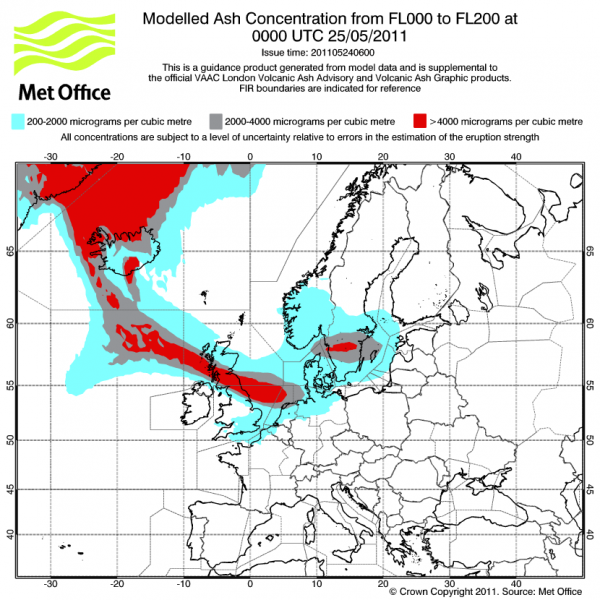 When can planes fly through ash? 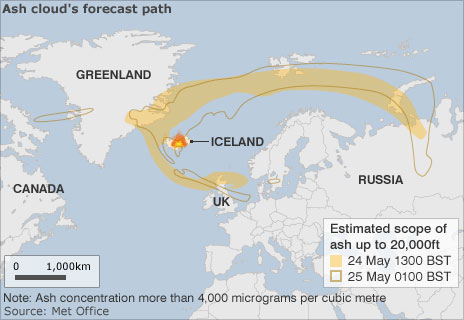 Update on volcanic activity in Grímsvötn