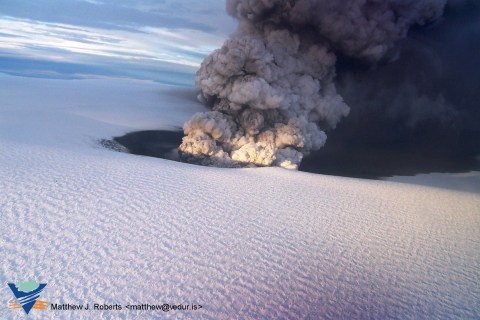 The Glacier Change blog posted an interesting article about recent eruption of Iceland volcano from a glaciers perspective: Skeiðarárjökull Glacier,Vatnajökull retreat Grímsvötn eruption and Jökulhlaup May 2011

Skeiðarárjökull Glacier is a large outlet glacier draining south from Iceland’s largest ice cap Vatnajökull. This glacier is well known for the massive glacier outburst floods, jökulhlaup, that are generated by Iceland’s most active volcano, Grímsvötn. This volcano is near the summit of the ice cap, the geothermal heat generates a subglacial lake in the Grímsvötn crater, that particularly during volcanic eruptions releases a large volume of meltwater. The volcano is 50 km from the terminus of the glacier where the meltwater emerges. The volcano erupted generating a jökulhlaup in 1998 and 2004. A view from the terminus which has retreated 3 km in the last 150 years and 500 m in the last decade, indicates the Volcano (G), ash layers of previous eruptions (a) on the glacier surface and the outlet streams J. 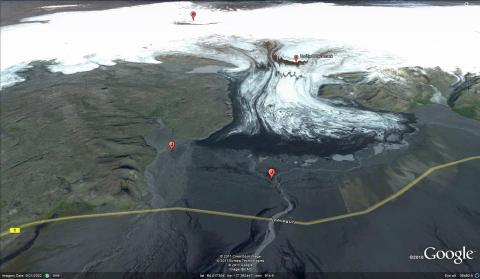 In the fall of 2010 a glacier outburst flood was recorded without an eruption. TheIcelandic Met Office observed that on Oct. 31 a discharge of 143 m3/s was being released and the water was confined to a narrow part of the channel. Between 9 and 10 AM on November 1, the discharge tripled to 455 m3/s, filling most of the river channel underneath the bridge. By the next week flow had subsided, a view of the outlet river going under the highway indicates the size, normal melt is not occurring at this point, from the Met Office. 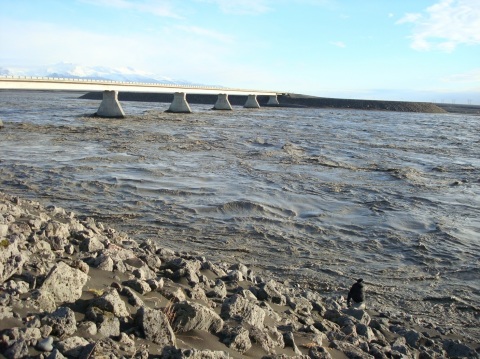 The cloudy conditions have prevented the Icelandic Met Office from obtaining clear photographs of the eruption that began on May 21, 2011 to date. A ground view illustrating the issue from May 22 is available. If we go back to the Met Office photographs of the 2004 eruption we can see in the top image the volcano erupting through the accumulation zone of the ice cap. 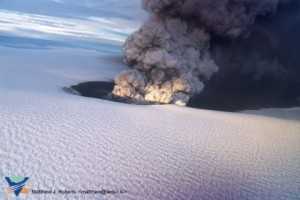 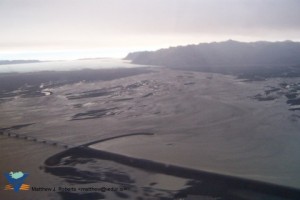 In the right image the jökulhlaup is draining from the west side of the glacier. The current eruption was heralded by a sharp increase in seismicity recorded by the Met Office monitoring stations beginning on May 18th left image. The most interesting point is that seismic activity in the entire Vatnajökull has been increasing in the last five years and that this can be seen in the time series below from the Met Office completed before the eruption. Further this activity is not confined to just the Grímsvötn as seen in the bottom image map. 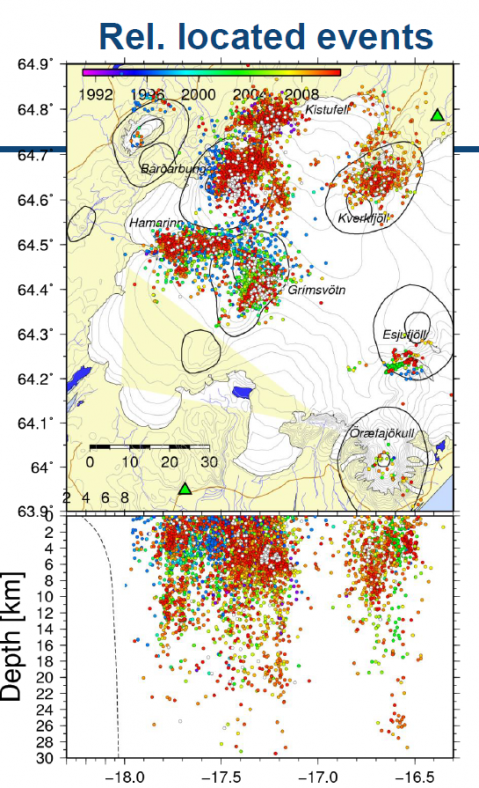 To date, there is no sign of a jökulhlaup which typically appears within the first 24 hours after the eruption. This could reflect the fact that the subglacial lake was partially emptied in 2010 and would have to fill more than usual before it can float the glacier and release the meltwater underneath the ice cap.

A map of a 1996 jökulhlaup from Jóhannesson (1998) indicates the span in tan of the terrain that was flooded by the jökulhlaup. The recent glacier retreat has been more rapid on the western and center portion of the terminus. In the eastern section the proglacial lake at the terminus has many numerous icebergs. This retreat is similar to that of draining the Tungnaarjökull west side of Vatnajokull 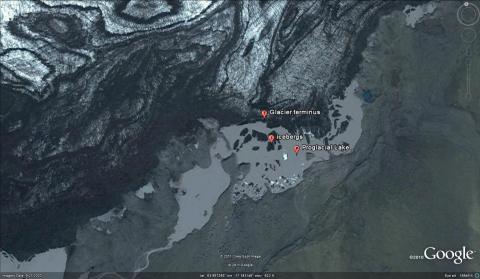 The impact of this subglacial river discharge on the glacier will be minor compared to that on Gigjokull last year. The ash when it is more than 3 cm thick will insulate the glacier, less will tend to increase melting. The thickness distribution will not be known for sometime. Another observation is that the Icelandic Met Office has an excellent monitoring system in place to help forecast and respond to such events. (GlacierChange)