Tropical storm Aere lashed the northeastern Philippines on Sunday, killing at least nine people and forcing more than 100 000 villagers to flee from farming towns threatened by landslides. The storm slammed into Catanduanes province with winds of 53 miles (85 kilometres) per hour and gusts of 62 mph (100 km/h). It triggered landslides and floods, disrupted transportation and knocked out power in some towns.

More than 4 700 commuters were stranded in several seaports after ferries suspended trips and roads were closed due to floods and the danger of landslides, officials said. Several domestic flights were canceled.

An elderly woman drowned trying to cross a swollen river in Daraga town in Albay province, and a man was electrocuted in a flooded village in Libon town. Three men drowned in Catanduanes and Leyte provinces, and a driver died in a truck crash during stormy weather in Camarines Sur, officials said. 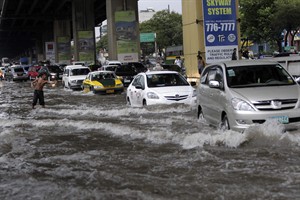 Authorities helped evacuate villagers Saturday in farming communities at the base of Mayon volcano in Albay, where heavy rain threatened to turn into mudslides. Many more fled their homes Sunday as floodwaters began to rise. Tons of ash have been deposited on Mayon's slope from past eruptions, and mudslides caused by a typhoon in 2006 buried entire villages, leaving about 1,600 people dead and missing.

Officials shut off power in at least four flooded Albay towns to avoid accidents. Albay is about 212 miles (340 kilometers) southeast of Manila.

The second storm to batter the country this year is expected to blow northwestward and exit from the country later this week. Lightning struck a Philippine Airlines plane at Manila's international airport during a thunderstorm late Saturday. The Airbus 320 was not damaged, and the crew and passengers were not harmed. The airline flew them on another flight to Bangkok as a precaution. (AP)

An early-season tropical storm has formed east of the Philippines and will impact the nation through early next week.

Tropical Depression 03W formed early Friday morning, EDT and has since strengthened into Tropical Storm Aere, with sustained winds near 60 mph (92 km/h). This storm has been moving slowly toward the northwest over the past day or two, allowing some of the outer rain bands to impact portions of central and northern Philippines.

Since Thursday, more than 28 inches of rain (700 mm) has inundated the town of Catarman, located on the island of Samar. Additional rainfall totals through Monday can easily exceed 10 inches (250 mm). While Aere is currently a weak tropical storm, some slow strengthening is possible prior to landfall late Sunday afternoon, EDT, over eastern Luzon Island. Maximum sustained winds at the time of landfall may be as high as 70 mph (110 km/h).

Luzon Island is home to the capital city of Manila, located on the western side of the island. While rugged mountains over central Luzon will prevent the worst of the storm from impacting the city, some heavy rain will still reach the city Sunday and Sunday night. Five inches of rain has already inundated Manila as of Sunday evening. Additional rain could lead to some flooding in and around the city.

Local officials have closed many seaports and airports in advance of the approaching storm, leaving thousands of travelers stranded. These ports are expected to remain closed until at least Monday, when the storm moves away from the area.

According to the Philippines weather service, an average of nine storms and typhoons hit the country each year.

Officials are hoping the early start to the season doesn't mean an active season. Many residents of Luzon still have the 2009 season fresh in their minds, when Tropical Storm Ketsana and Typhoon Parma struck the region within a week of each other. The combined storms led to some of the worst flooding in recent history across Luzon. (AccuWeather) 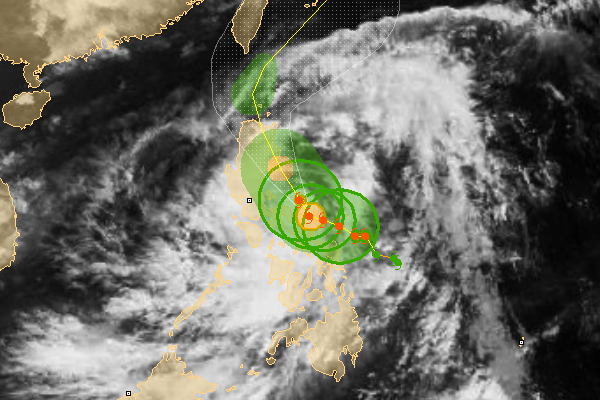