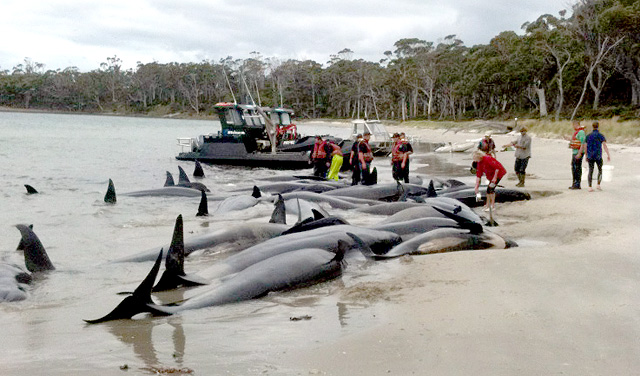 A group of about 30 pilot whales have become stranded on Bruny Island, south of the Tasmanian state capital Hobart.The whales are stranded on Butlers Beach on the northern tip of Larbillardiere Peninsula adjacent to Partridge Island.

Preliminary reports indicate around 30 whales have stranded with some believed to be still alive. Initial reports indicated they were pilot whales. Department of Parks and Wildlife spokeswoman Liz Wren told the Hobart Mercury newspaper that 12 of the whales were still alive with people on the beach trying to move them back into the water.

A good question is what causes mass strandings and are they really increased over the years or we just get more reports about it. Mass strandings could be on the rise due to ocean poluttions and oxygen dead zones. 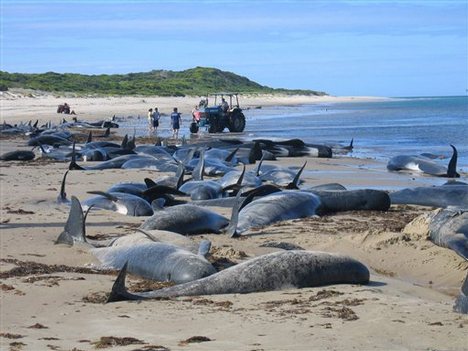 Mass strandings of dolphins, whales, and other marine mammals date back to the time of Aristotle, but some environmental activists have suggested that human impacts of pollution, shipping noise and, in some cases, military sonar have led to a rise in such frequency and severity of such events. And so scientists have been trying to untangle what factors cause these normally adept swimmers and maritime navigators end up in shallow water where they can become beached and die.

Statistically, we are only able to determine the cause of a stranding in about 50 percent of all cases worldwide. In some cases it is obvious, like a ship strike leaving an animal in poor condition. In the northeastern United States pneumonia is a common cause of stranding. We see other diseases and trauma, such as shark attack on whales or dolphins or attacks by members of the same species. Poisonous “red tides” will also affect marine mammals. Some strandings have been speculated to be related to anomalies in the magnetic field. Military sonar has been implicated in the mass stranding of beaked whales. Although there have been environmental groups publishing press releases about all whales being affected by sonar—that’s never been demonstrated. (Darlene Ketten, a neuroethologist and expert on hearing in marine mammals at the Woods Hole Oceanographic Institution in Cape Cod for in Scientific American, 2009)

According to a report in Ambiente Brasil, observations indicating that animals may foresee disaster are not entirely uncommon, nor is the notion a modern one. A strange occurrence was noted by famed philosopher Immanuel Kant, in 1755, when he witnessed a multitude of earthworms emerging from the ground in south-east Spain. Eight days later, a devastating earthquake struck in Portugal.

In 1966, the city of Parkfield, California, was inexplicably overrun with rattlesnakes, fleeing the surrounding hills in droves. Two days later, an earthquake shook the area.

When officials from Haicheng, China, observed wildlife and livestock acting strangely in 1975, they decided to evacuate the city’s 90 thousand residents. Only 10 percent of the city remained standing after the earthquake that occurred a short while later.

In February 2001, a large number of cats are reported to have gone missing in western Washington, twelve hours before a quake shook Seattle.::

Seismologists in Guangxi Province, China, believe that snakes may be the most sensitive to subtle vibrations which precede a quake–predicting the disaster about 120 hours prior to the major event. The snakes are monitored 24 hours a day to observe any erratic behavior. According to the researchers, before an earthquake the snakes have been seen acting unusually, repeatedly throwing themselves against the walls of their enclosures.

Whales stranded on Bruny (TheMercury)
Is New Zealand earthquake linked to the mysterious deaths of more than 100 pilot whales? (TheMirror)
Can Animals Foresee Natural Disasters? (TreeHugger)
Why do whales beach themselves? (ScientificAmerican)