An intense earthquake swarm that started near the Fagradalsfjall eruption site in Reykjanes Peninsula, Iceland on December 21, 2021 — just one day after the eruption was declared officially over — continues with no signs of abating. While no new lava flows have been detected at the crater for the past three months, uplift is still ongoing in the area. The Aviation Color Code remains on Orange.

More than 5 000 earthquakes have been registered in the area since the swarm started, with most of them below magnitude 3.

A total of 2 268 earthquakes were reported in the Reykjanes Peninsula by the Icelandic Met Office (IMO) in 48 hours to 10:25 UTC on December 24, with a vast majority near Fagradalsfjall.

IMO scientists believe the quakes are the result of the lateral movement o magma.1 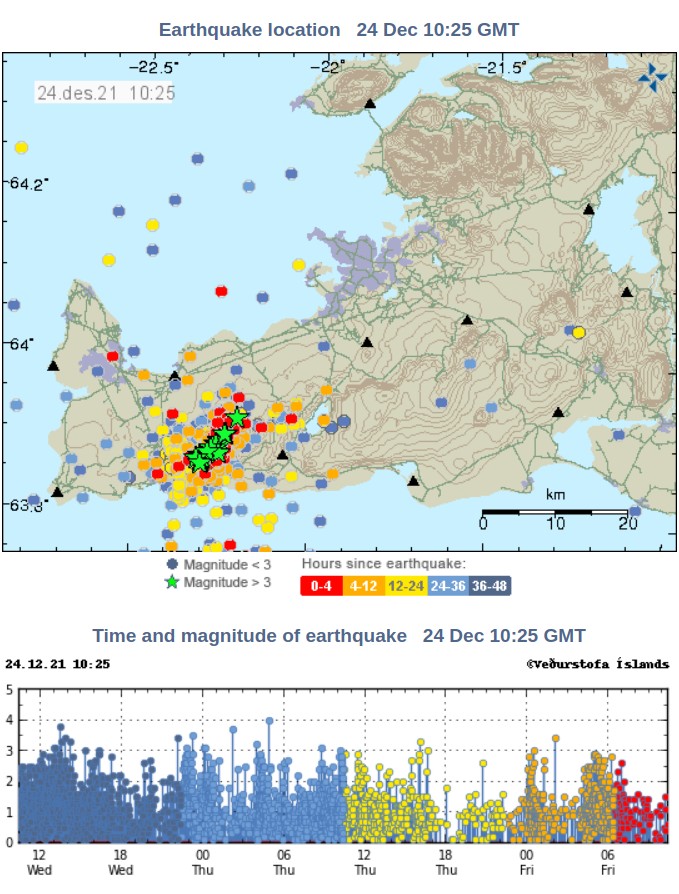 No new lava flows have been detected at the crater in Fagradalsfjall for the past three months but uplift is still ongoing in the area and the scientists are currently working on modeling the ongoing processes and identifying the possible scenarios.

"It can be difficult to say with some accuracy when an eruption is finished because the volcanic activity can be intermittent," said Sara Barsotti, IMO's Coordinator for Volcanic Hazards.2

"Before the eruptive activity in Geldingadalir started, the Reykjanes Peninsula has been very active in terms of seismic activity and magmatic unrest. As we know from the past, when the peninsula is reactivated, episodic eruptions might occur as a series."

"We continue to monitor the Reykjanes peninsula closely but we can say that the specific eruption that started on the March 19 got to an end. However, even though this episode is closed, we know the activity in the area is still ongoing and other eruptive phases might start in the near future," says Sara.

2 Update on the eruption in Geldingadalir – IMO