An intense earthquake swarm started near Fagradalsfjall, Reykjanes Peninsula, Iceland at 17:00 UTC on December 21, 2021 — just one day after the official end of the eruption in the area, the longest in the country in more than 50 years. The Aviation Color Code was raised to Orange. The Scientific Council is on a meeting since 11:00 UTC to review the current situation.

The level of uncertainty in civil protection means that there is increased monitoring of scenarios, which in later stages could lead to threats to the health and safety of people, the environment, or settlements.

Declaring the level of uncertainty is part of the civil protection organization's procedures to ensure formal communication and disclosure between responders.1

The intensity increased significantly around 00:34 UTC today, with more than 20 earthquakes larger than M3.0. The activity is still strong with 1 to 10 quakes per minute, the Icelandic Met Office (IMO) reports.2 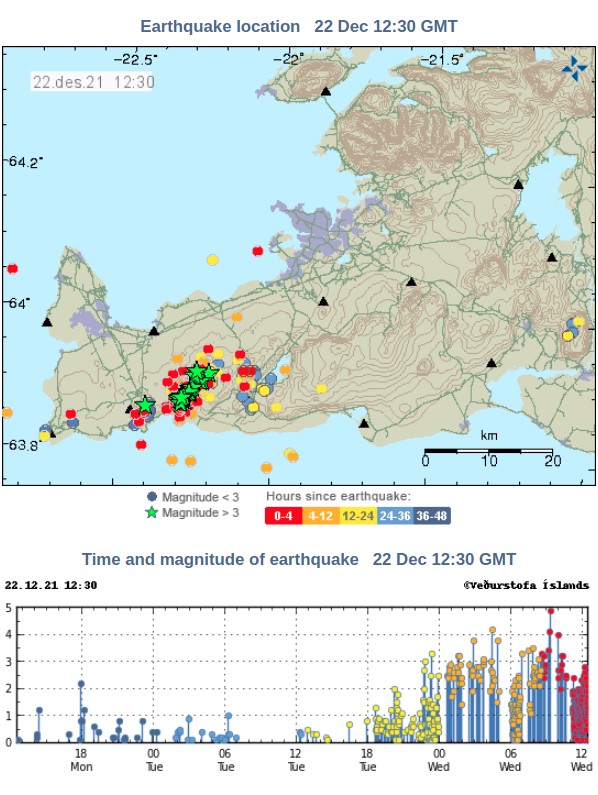 As the night wore on, the activity shifted to the volcanoes in Geldingadalur.

"It is not unlikely that magma is flowing, which means that the magma is moving horizontally in the earth's crust," IMO said at 05:45 UTC, adding that there are currently no signs of eruption.

Deformation measurements show that magma accumulation is underway in the earth's crust at Fagradalsfjall and it is difficult to predict what will happen next.

Due to the current situation, IMO has raised Aviation Color Code for the Reykjanes volcanic system to Orange.

The swarm started just one day after the eruption at Fagradalsfjall was declared officially over. It was the country's longest volcanic eruption in more than 50 years.