At least 7 pyroclastic flows descended down the slopes of Merapi volcano, Indonesia starting at 21:58 UTC on August 7, 2021, with ash rising up to 3.6 km (12 000 feet) above sea level. No casualties were reported. The Aviation Color Code remained at Orange.

According to the Merapi Volcano Observatory, series pyroclastic density currents (PDCs) were recorded on a seismogram with a maximum amplitude of 20 mm (0.78 inches) and a duration of 222 seconds (3.7 minutes).

Ash-cloud generated by PDCs was estimated by ground observer reaching a height of 3.6 km (12 000 feet) a.s.l. and moving W.1

The farthest sliding distance was 3 km (1.8 miles) to the southwest (Kali Bebeng).

The rumbling sound of the eruption could be heard several kilometers away from the volcano, said Hanik Humaida, head of Yogyakarta’s Volcanology and Geological Hazard Mitigation Center.2

Humaida said Merapi has seen increased volcanic activity in recent weeks, with the lava dome growing rapidly before partially collapsing during this eruption. 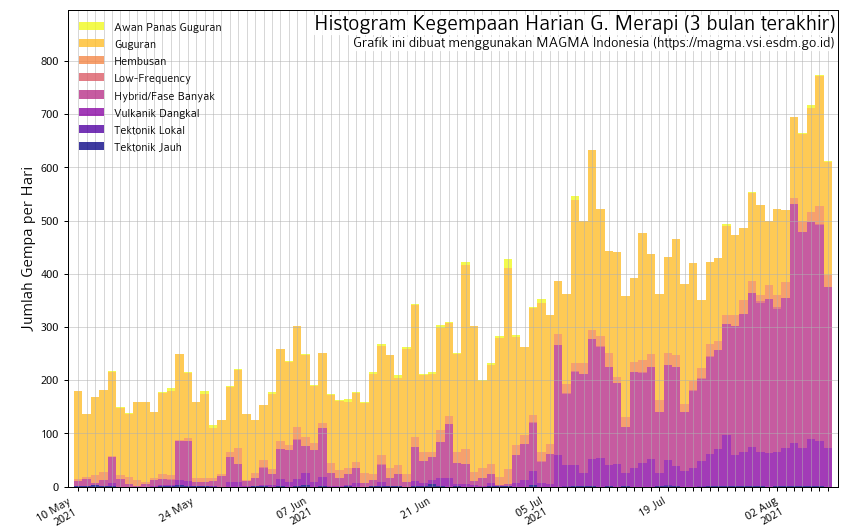 The last major eruption of this volcano (VEI 4) took place in 2010, claiming the lives of 347 people.

Pyroclastic flows and lahars accompanying growth and collapse of the steep-sided active summit lava dome have devastated cultivated lands on the western-to-southern flanks and caused many fatalities during historical time.4