A team of international researchers has made a major discovery about aurora activity on Jupiter. Their study supports the previously controversial idea that Jupiter's polar cap is threaded in part with closed magnetic field lines and proves the lights hold clues to the makeup of a planet's magnetic field and how it operates.

The researchers presented a study done with the newly developed magnetohydrodynamic model of Jupiter's magnetosphere, which provided supporting evidence to a previously criticized theory in 2010, that Jupiter's polar cap is interweaved in part with closed magnetic field lines, rather than with completely open magnetic field lines– as is the case with most of the planets in the solar system.

"We as a community tend to polarize– either open or closed– and couldn't imagine a solution where it was a little of bot," said author Peter Delamere, a professor of space physics at the University of Alaska Fairbanks Geophysical Institute.

Open lines are those that originate from a planet but trail off into space away from the Sun, instead of reconnecting with a corresponding location in the opposite hemisphere.

For instance, on Earth, the aurora appears on closed field lines around the auroral oval– the high latitude ring near each end of our planet's magnetic axis. However, within that ring, as with some other planets in our solar system, is an empty spot called the polar cap– an area where magnetic field lines spill unconnected, and where the aurorae rarely appear.

Jupiter, on the other hand, has a polar cap, in which the aurora gleams, puzzling scientists. The problem is that researchers were focused on Earth in their thinking about Jupiter because of what they had learned about our planet's own magnetic fields, said Delamare. 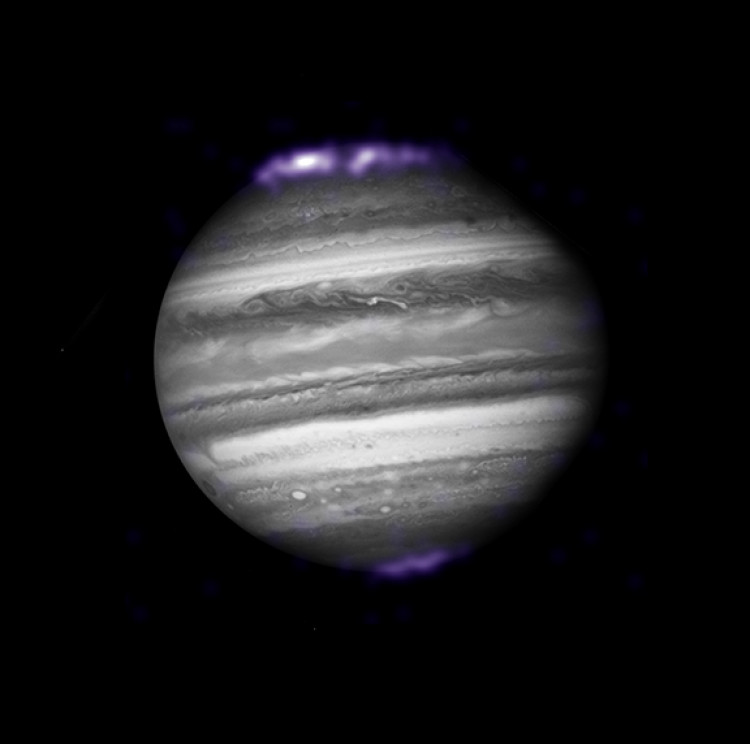 In July 2016, NASA's Juno spacecraft provided images of the polar cap and aurora. However, the images, along with some captured by the Hubble Space Telescope, couldn't resolve the case among scientists about open versus closed magnetic field lines.

Enter Delamare's team, who revealed that there is a largely closed polar region with a small crescent-shaped area of open flux responsible for about nine percent of the polar cap region. The rest was an active aurora, indicating closed magnetic field lines. It turns out that Jupiter has a mix of open and closed lines in its polar caps.

"There was no model or no understanding to explain how you could have a crescent of open flux like this simulation is producing," explained Delamare. "It just never even entered my mind. I don't think anybody in the community could have imagined this solution. Yet this simulation has produced it."

"To me, this is a major paradigm shift for the way that we understand magnetospheres. It raises many questions about how the solar wind interacts with Jupiter's magnetosphere and influences the dynamics."

"The jury is still out on the magnetic structure of Jupiter's magnetosphere and what exactly its aurora is telling us about its topology."

Jupiter’s bright persistent polar aurora and Earth’s dark polar region indicate that the planets’ magnetospheric topologies are very different. High-resolution global simulations show that the reconnection rate at the interface between the interplanetary and jovian magnetic fields is too slow to generate a magnetically open, Earth-like polar cap on the time scale of planetary rotation, resulting in only a small crescent-shaped region of magnetic flux interconnected with the interplanetary magnetic field. Most of the jovian polar cap is threaded by helical magnetic flux that closes within the planetary interior, extends into the outer magnetosphere, and piles up near its dawnside flank where fast differential plasma rotation pulls the field lines sunward. This unusual magnetic topology provides new insights into Jupiter’s distinctive auroral morphology.