The Icelandic Meteorological Office (IMO) has raised the Aviation Color Code for Krysuvik volcano to Yellow on February 24, 2021, due to increased seismicity near the volcano. The last eruption at this volcano took place in the year 1340.

Intense seismic activity had been detected over the previous few days and since midnight UTC on February 24 through 11:07 UTC, more than 500 earthquakes had been recorded.

The seismic unrest was unusual for the area in the context of the unrest in the Reykjanes peninsula that began in January 2020. 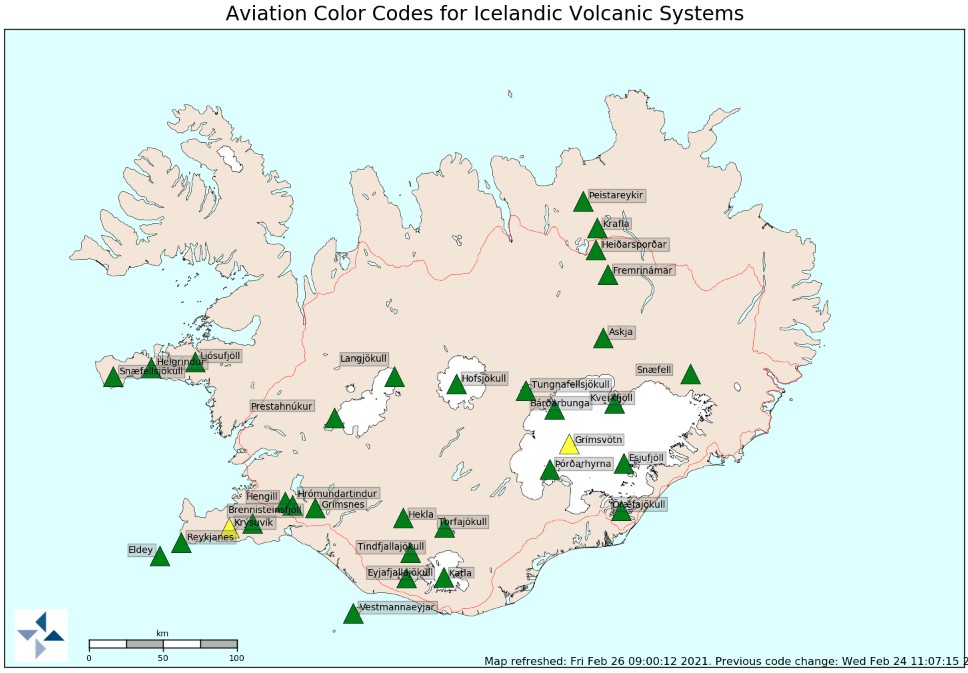 The Krýsuvík-Trölladyngja volcanic system on the Reykjanes Volcanic Zone has been moderately active in the Holocene — last 8 000 years. The last eruptive episode, consisting of two eruptions separated by 37 years, occurred in the 12th

The NE-SW trending volcanic system comprises a 50 km (31 miles) long, composite fissure swarm without a developed central volcano. Maximum elevation is ~400 m (1 300 feet) a.s.l. The system has no ice cover but a large lake lies within the system.

The characteristic activity is effusive basaltic eruptions producing lava flows covering some tens of km2 and minor tephra deposits. Eruption frequency during the last 3 000 years is 1 eruption per 750 years.

The largest known eruption in Krýsuvík – Trölladyngja volcanic system is the formation of a shield volcano of a few km3 in volume. Two such eruptions have occurred in the last 14 000 years.

An eruption such as that one is considered unlikely at present time.

Several eruptions have taken place since the settlement of Iceland, including the eruption of a large lava flow from the Ogmundargigar crater row around the 12th century.

The latest eruption took place during the 14th century.