A winter storm gripping much of the United States with frigid temperatures this week is likely to bring significant ice accumulation from portions of the mid-Mississippi Valley to the Ohio and Tennessee valleys from late Tuesday night (LT), February 9 into Thursday, February 11, 2021.

The areas with the best chance to receive 6 mm (0.25 inches) or more of ice extend from the Ozarks to the I-64 corridor in eastern Kentucky.

Ice accumulations extending 13 mm (0.50 inches) are possible in some locations.

Gusty winds both Thursday and Friday may cause additional strain to heavily iced trees and power lines, potentially leading to more power outages and downed trees.

As Arctic air rushes in behind the winter storm late week and into the weekend, residents in these areas will contend with bitterly cold temperatures and wind chills.

A cold and active weather pattern is expected to persist throughout the next several days across the country, with only a few lucky locations across the Southeast and Southwest remaining warm and dry, NWS forecaster Snell noted. 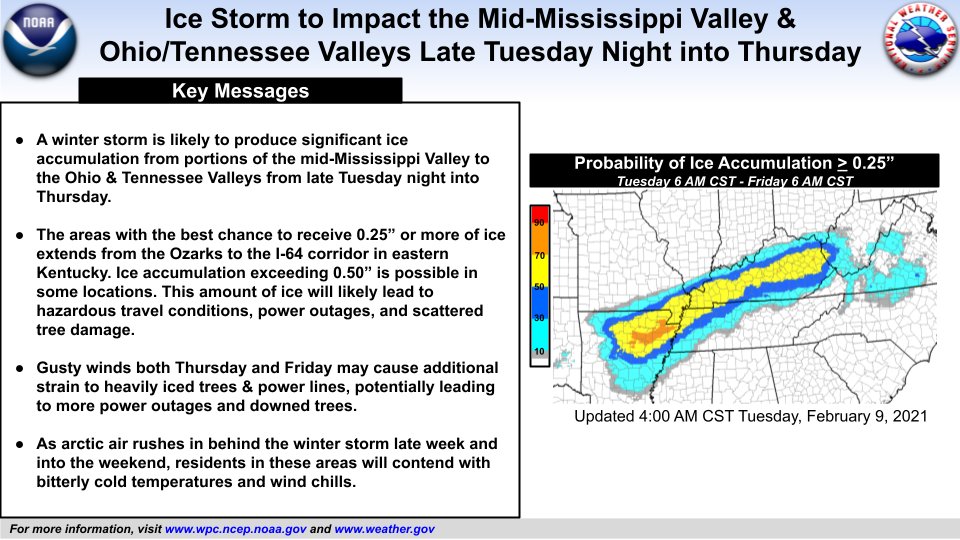 Setting the stage for another frigid February day is a brutally cold arctic high-pressure system located across the north-central United States.

High temperatures will struggle to make it above zero from Montana to Minnesota through the next few days, with lows in the negative teens and negative twenties.

Due to the dangerous combination of very cold temperatures and light wind, Wind Chill Warnings and Advisories stretch across 12 different states from the Northern/Central Plains to the Midwest.

Temperatures well below average also reach southward to the Southern Plains and eastward to the Upper Ohio Valley.

By Thursday this cold air mass is expected to ooze south across more of the south-central U.S., as well as the Pacific Northwest.