Moderate Tropical Storm "Eloise" made landfall in Antalaha, Sava region of Madagascar on the evening of January 19 (LT), 2021. Eloise is expected to bring heavy rains to parts of Madagascar before re-emerging in the Mozambique Channel on January 21 and strengthening as it moves towards southern Mozambique.

The system is expected to bring heavy rains, which could generate floods and landslides in northern Madagascar.

This is a dangerous system with heavy rains that can last for more than 24 hours and strong winds, WMO said. 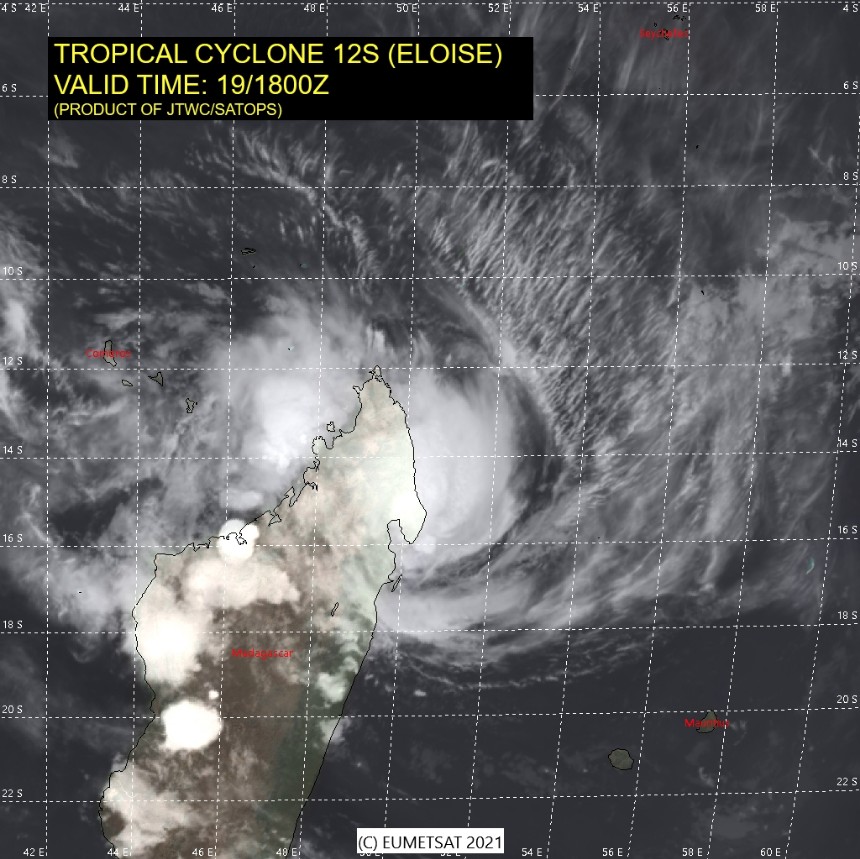 Eloise is forecast to decrease in intensity as it crosses Madagascar before it remerges in the Mozambique Channel on January 21, where it is likely to re-strengthen, potentially to a Tropical Cyclone, DG ECHO reported.

In Mozambique, preliminary forecasts indicate a shift in the trajectory of the storm from the central part of the country to a potential landfall in southern Mozambique on January 23, between Inhambane and Gaza provinces.

However, the storm’s trajectory remains uncertain and it is possible that the system could turn southwest and remain at sea. 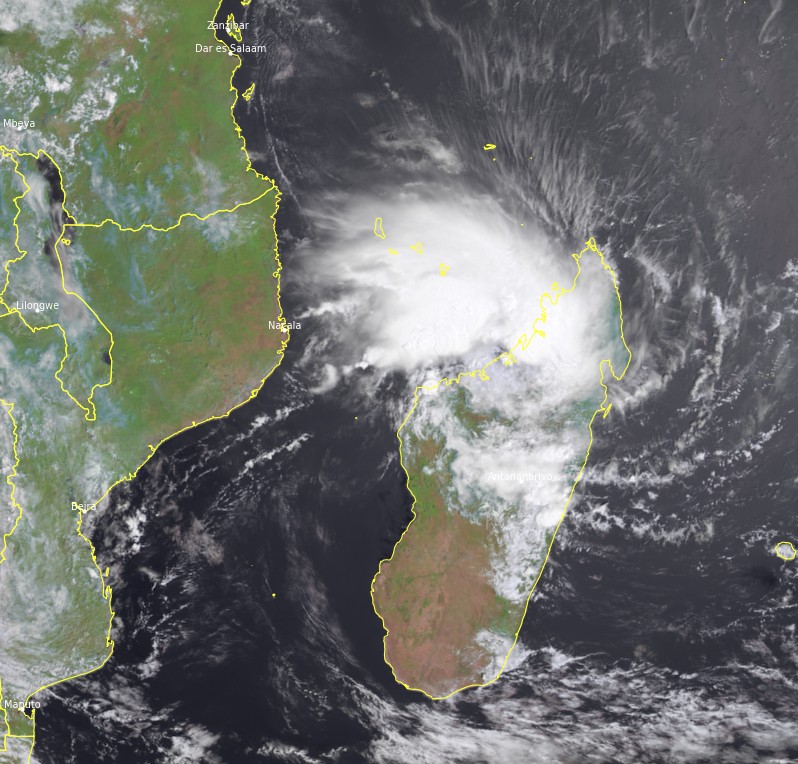 Meanwhile, the Inhanombe and Mutamba basins in southern Mozambique are both at alert levels – in addition to the Buzi and Pungoe basins in central Mozambique. 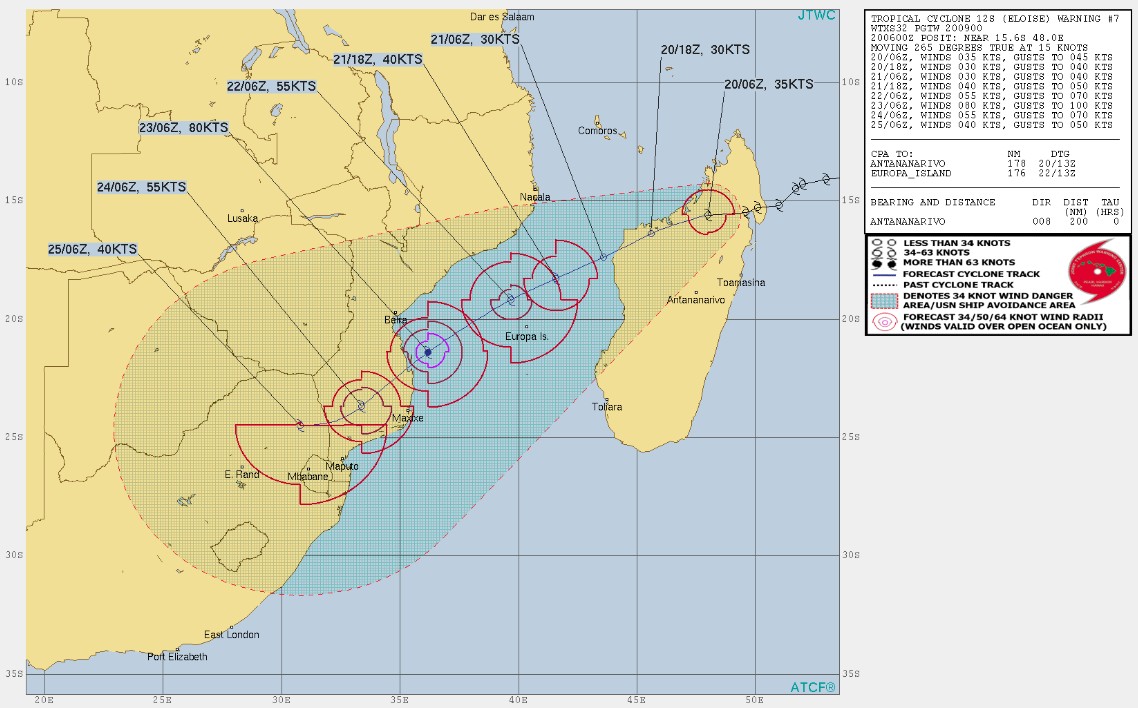 "The system is expected to move back oversea late next night [Thursday, January 21 (LT)]," RSMC La Reunion said in their latest bulletin issued at 06:00 UTC on January 20.

After that, Eloise is forecast to keep a WSW to SW track which should bring it over the Mozambican coasts by Saturday, January 23, while the subtropical ridge renews itself to the southeast of the system.

A difference in appreciation of the extension of this ridge (in connection with the establishment of an upper levels trough over southern Africa from tomorrow evening) led to the 18z run to a significant difference in the track between GFS and YEWS that could leave doubt about the possibility of landfall over Mozambique.

The GFS/00z run has now agreed on the scenario of IFS which increases the confidence level of the track prediction. 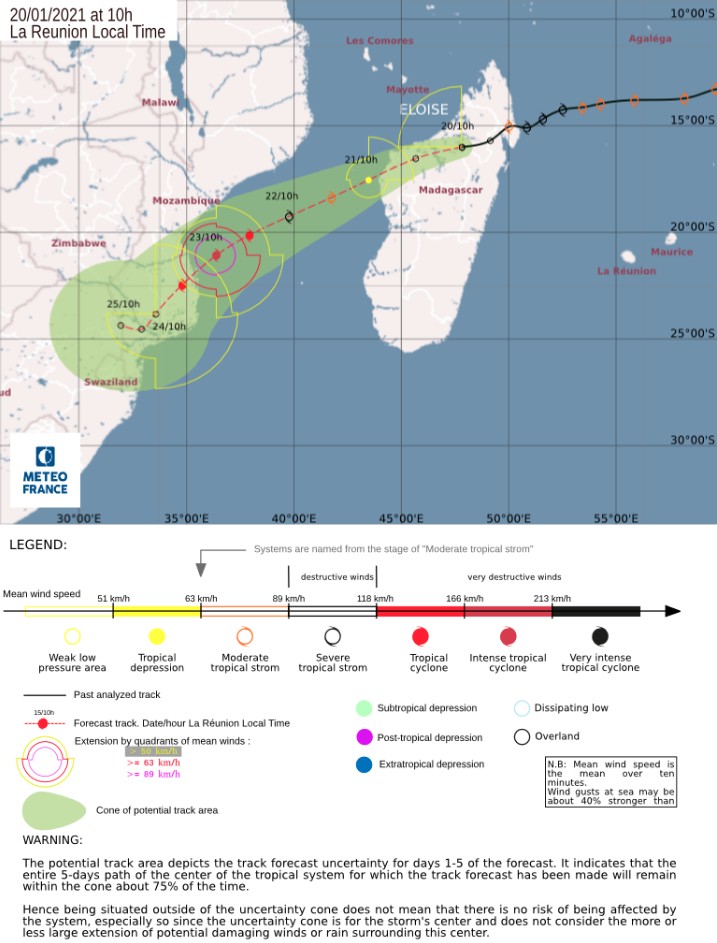 On Thursday, January 21, once out to sea in the Mozambique Channel, environmental conditions will be favorable for a frank and rapid re-intensification, the center said.

It is advisable to remain cautious on the intensity prediction after an overland track that could delay re-intensification. However, the guidances are generally very reactive and suggest that Eloise should reach the threshold of a tropical cyclone, or even an intense tropical cyclone, before landing.

There is also consensus among guidance that Eloise should become a large enough system for the Mozambique Channel, which would make it a particularly dangerous system.

Eloise is currently generating hazardous weather conditions in northern Madagascar. If the rains are going to stop on the landfall zone, accumulations of 100 to 150 mm (4 – 6 inches) in 24 hours, locally more, are possible in the north-western regions of Madagascar.

Strong winds, reaching near gale force winds 55 km/h (34 mph), will spread from north to south along the northwestern coast of Madagascar.

These winds, oriented from the sea to the land, may cause some local coastal submersion.

The inhabitants of the areas concerned (NW of Madagascar between Nosy Be and Maintirano) are invited to keep themselves informed of the following events through the information and recommendations of the Malagasy meteorological services.

For Mozambique, the threat of a significant impact is increasing for the area between Beira in the north and Inhambane in the south and it is important that all the inhabitants of the potential impact zone follow the instructions of the local authorities.

From Friday, January 22, heavy rains and strong winds will start to impact some areas, especially between Pebane and Beira.

The weather is expected to deteriorate within the potential impact zone from the night of Friday to Saturday. The inhabitants of the central and southern regions of Mozambique are invited to follow the instructions of the local authorities.