The Irish Meteorological Service — Met Éireann — named Storm Ellen on Tuesday evening, August 18, 2020. Ellen formed over the Atlantic Ocean — fuelled by the remnants of Hurricane "Kyle" — and is forecast to bring disruptive and potentially damaging winds Wednesday evening, August 19 and throughout Thursday, August 20, 2020, to Ireland and parts of the United Kingdom. Due to the combination of storm surge, spring tides, and onshore winds, there is a risk of some coastal flooding. There is a risk also of some inland and river flooding with some potentially heavy, thundery downpours.

Ellen is the 5th named storm from the Met Éireann, UKMO, and KNMI storm list of 2019/2020. It is the 6th named storm overall as the first one, Storm Lorenzo, was named by the National Hurricane Center. Lorenzo originated as Hurricane "Lorenzo," the easternmost and northernmost Category 5 hurricane ever recorded in the Atlantic Ocean. The hurricane weakened considerably as it stalled off the northwest coast and produced few impacts as it tracked over Ireland on Friday, October 4, 2019.

Status Orange/Yellow wind warnings are in effect for the Island of Ireland and will be updated Wednesday morning. Orange level impacts may potentially occur over any part of the Island and tourists in exposed locations, in particular, will be at risk for these unseasonable stormy and wet conditions.

The storm is expected to move over the southwestern Ireland Wednesday evening, August 19, tracking northward over the country during Wednesday night and daytime Thursday, August 20.

Gusts up to 100 km/h (62 mph) can be expected and potentially gusts may exceed 130 km/h (80 mph) in some exposed coastal and mountain locations and some lower locations due to funneling effects.

"There is still a high degree of uncertainty in the exact track of the storm and there is a considerable spread in possibilities over Ireland with some models indicating that the east may get the strongest winds," Met Eireann meteorologists said. 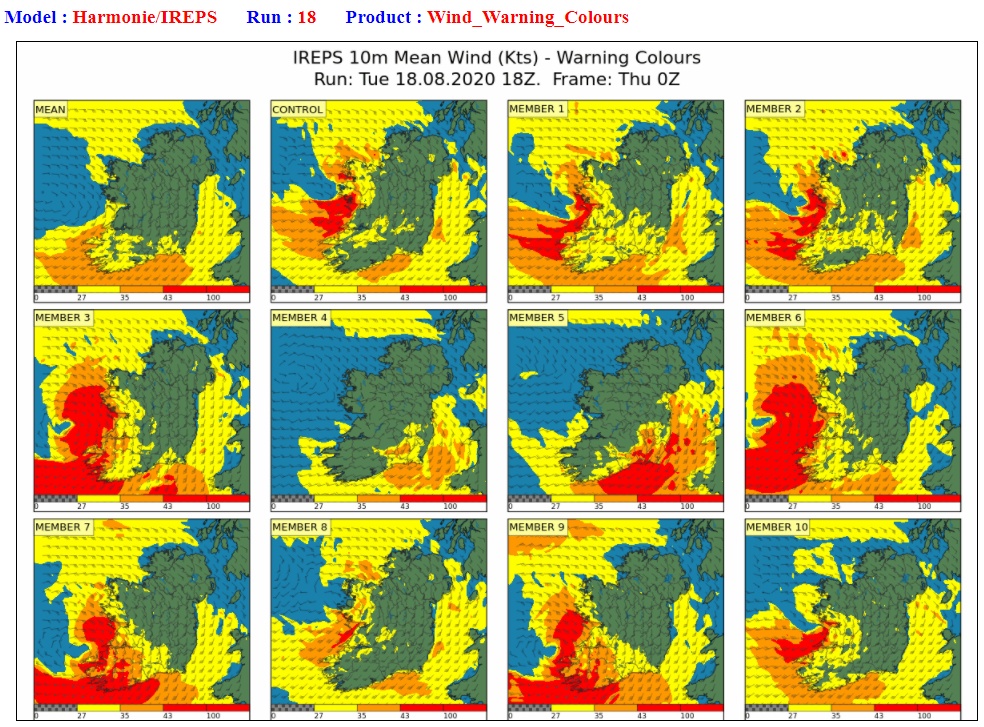 "Following the recent hot and thundery weather we are seeing a significant change to very unsettled conditions for August with an unseasonal spell of strong winds associated with low-pressure centers for the second half of the week," Met Office Chief Meteorologist, Steve Ramsdale said.

"Uncertainty remains high in the intensity of these systems at this point, but we are confident in the change to a spell of much windier weather. Tropical air associated with a decayed tropical cyclone is being drawn towards the UK, and the marked contrast between this warm and moist air with normal North Atlantic air masses can lead to a very vigorous system."

The Met Office has issued a wind warning for western parts of the UK from 20:00 LT on Wednesday until 23:59 LT on Thursday.

"Along with the sometimes heavy rain, strong winds have the potential to cause impacts that are not common in August. With this spell of unsettled weather coinciding with trees in full leaf and a peak in the camping season, wind-related impacts are more likely at lower wind speeds compared to other times of the year, particularly across Northern Ireland where winds are forecast to be strongest," said Deputy Chief Meteorologist, Matthew Lehnert.

"This spell of autumnal-feeling weather is going to make driving conditions very unpleasant for a lot of us over the next few days. Strong winds will mean journeys by road will take longer than usual, and could be affected by fallen branches on the roads. Add in some very intense rainfall and drivers will need to take real care to complete their trips safely," RAC Breakdown spokesperson Rod Dennis said.

"We urge every driver heading out to make sure their car is up to the task to avoid a breakdown in the wind and rain, especially if they’re towing or taking a longer trip – in particular, check the condition and pressure of all tires before setting out. When driving, slow down and pay close attention to high-sided vehicles and other drivers with caravans and trailers to give yourself plenty of time to react should any run into difficulties."

Temperatures will be much lower than the last ten days. Many locations across the UK will see temperatures around normal values for August, but parts of East Anglia could still see highs of around 28 °C (82.4 °F) on Thursday.