A strong cold front will produce strong to severe storms in the Plains and Great Lakes, the National Weather Service (NWS) meteorologists warned on May 23, 2020. Primary threats will be large hail and damaging winds. Very large hail will be possible in the western portions of the North/Central Plains. Meanwhile, gusty winds will continue producing critical fire weather threats across portions of the Desert Southwest.

A strong but slow-moving cold front will continue advancing across the Rockies and Plains through the weekend, NWS forecaster Tate said.

Moisture inflow and warmer than average temperatures ahead of this front should support thunderstorms throughout much of the Plains in particular.

Slight Risks of severe weather and flash flooding are in place over portions of the Plains and into the Middle Mississippi Valley over the next couple of days.

Scattered showers and thunderstorms are also possible across much of the eastern half of the nation.

Another area where potentially severe thunderstorms causing flash flooding could focus today is across northern Illinois in the vicinity of a surface low pressure center. 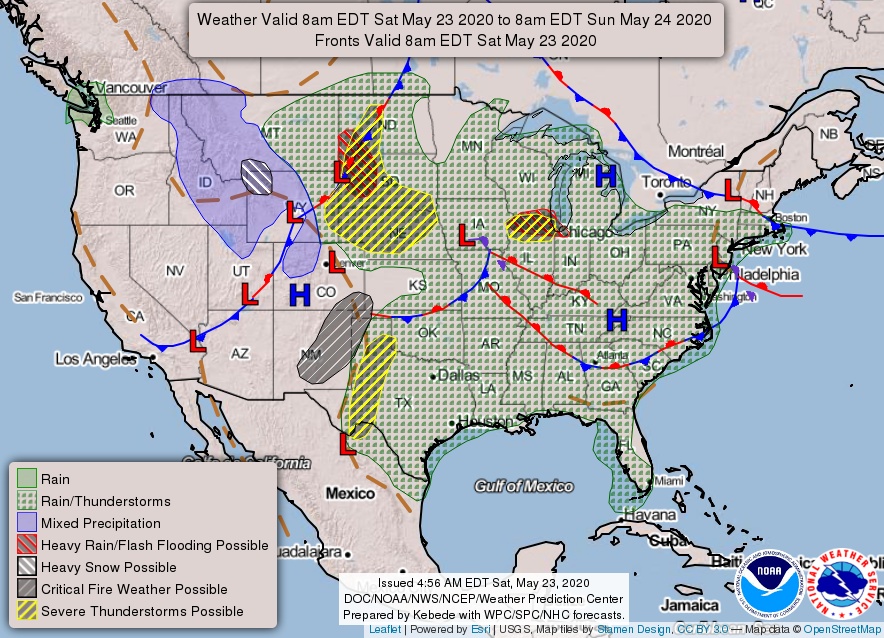 Behind the cold front, cooler than average temperatures are expected across the Intermountain West to Northern/Central Rockies. Highs today are forecast to be 5 to 15 °C (10 to 25 °F)  degrees below average.

The cold temperatures will support snow across higher elevations of the Northern and Central Rockies.

Additional snow could approach a foot in the Wind River Mountains, while the Central Rockies could see 100 to 200 mm (4 to 8 inches) of snow.

Farther south, dry and windy conditions are expected for the Four Corners and Southern High Plains, which could lead to fire danger, and there is a Critical Risk area outlined by the Storm Prediction Center.

Red Flag Warnings are also in effect for portions of the Southern and Central High Plains.