An outbreak of severe thunderstorms will be possible across much of the Deep South and Southeast U.S. on Sunday. April 19, 2020, the National Weather Service (NWS) warned on April 17. Damaging winds, large hail, and tornadoes will be the main threats. Heavy rainfall will also cause flash flooding, with some of the flooding locally significant.  The greatest threat appears to be from Louisiana to Georgia. Meanwhile, near-average or colder than average temperatures are forecast for much of the country today, though the Northwest and southern Florida should be above normal.

Rain and storms are possible across the Tennessee Valley and Southeast Friday, April 17 toward the Mid-Atlantic by Friday night into Saturday, April 18. Rainfall totals will generally remain light with the progressive nature of the precipitation.

"By Saturday into Sunday, the back end of the front at the surface lifting north plus the upper-level energy moving eastward across the Southwest should combine to cause an increasing threat for rain and thunderstorms in the Southern Plains to Lower Mississippi Valley Saturday," NWS forecaster Tate noted.

Thunderstorm hazards are forecast to ramp up significantly for the Southeast on Sunday, with a Moderate Risk of flash flooding in place along with an Enhanced Risk for severe weather. 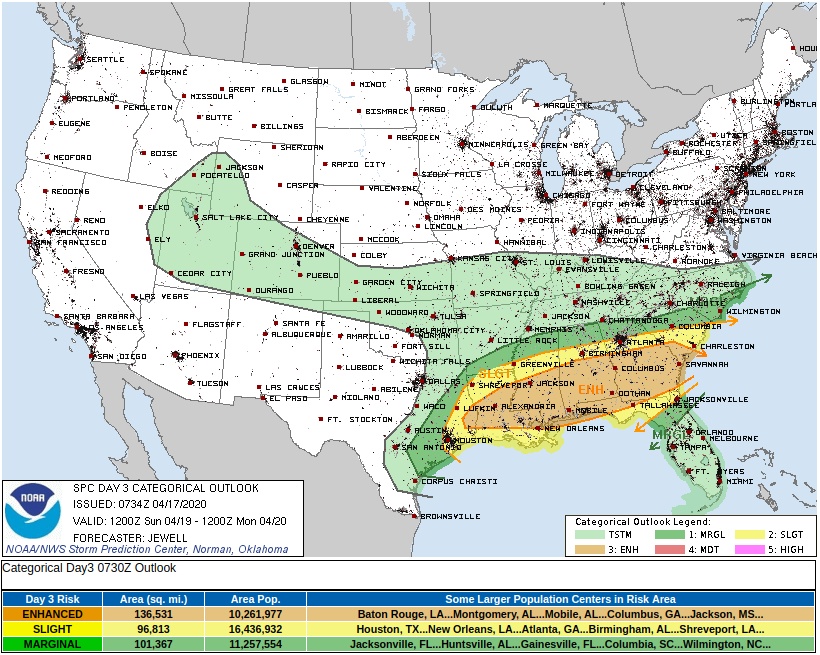 Meanwhile, near-average or colder than average temperatures are forecast for much of the country today, though the Northwest and southern Florida should be above normal.

The most anomalously cool temperatures today are expected from the Southern/Central Plains, Middle Mississippi Valley, and into the Upper Ohio Valley into the Great Lakes region.

Record low temperatures could occur across the Central High Plains, and Freeze Warnings and Frost Advisories are in effect for portions of the Central Plains, Ohio Valley, and the Mid-Atlantic.

Temperatures should moderate some on Saturday, but cool conditions are still expected from the Southern Plains northeastward to the Northeast, over California and the Southwest, and moving into the Northern High Plains behind a cold front–which should have some light precipitation associated with it as well.