A strong cold front is currently pushing through the northwestern U.S. and will be responsible for high temperatures 5 – 11 °C (10 to 20 °F) below normal through the end of this week. Accumulating snow will be possible across the higher elevations of the Northern Rockies.

A high amplified flow pattern for June remains across the lower 48 over the next few days, NWS forecaster Roth noted at 19:09 UTC today.

Highlighting the anomalous flow is a deep layer low which is expected to drop southeast out of southwestern Canada which eventually carves out an upper level trough bringing cold temperatures aloft across the West, continuing a pattern seen since late winter/early spring

The related instability should bring skirmishes of showers and thunderstorms, possibly severe, through portions of the northern Rockies tonight, June 19 before temperatures cool off on Thursday, June 20.

Snow levels are expected to fall as low as 1.9 km (6 500 feet), about as low as can be expected this late in June, with the Storm Prediction Center highlighting the potential for thunderstorms within the snow area.

The highest probabilities of 20 cm (8 inches) of snow in 24 hours – near 50% – center near Yellowstone National Park near the Wyoming/Montana/Idaho border between Thursday and Friday morning, June 21. 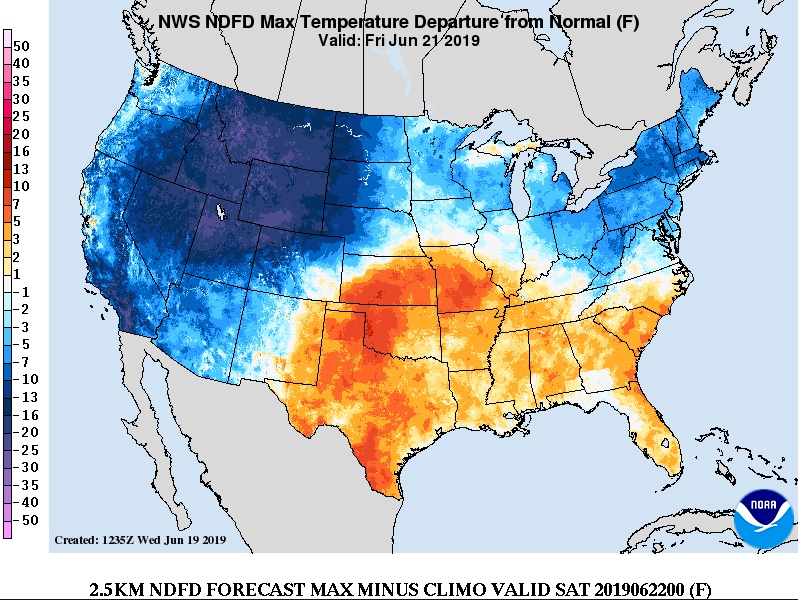 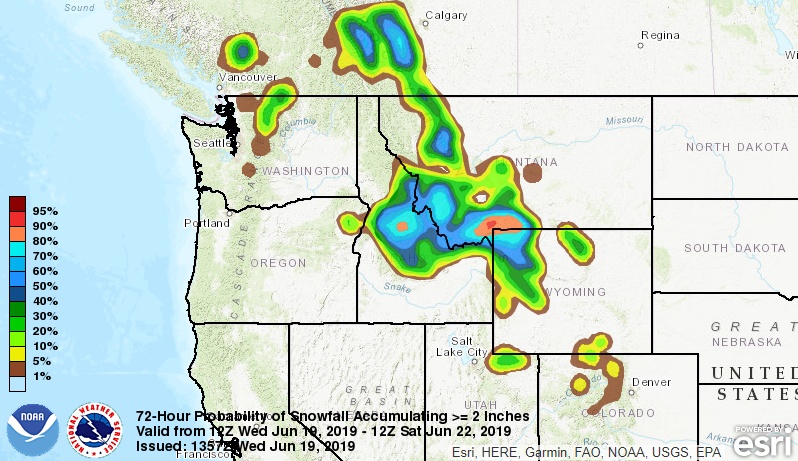 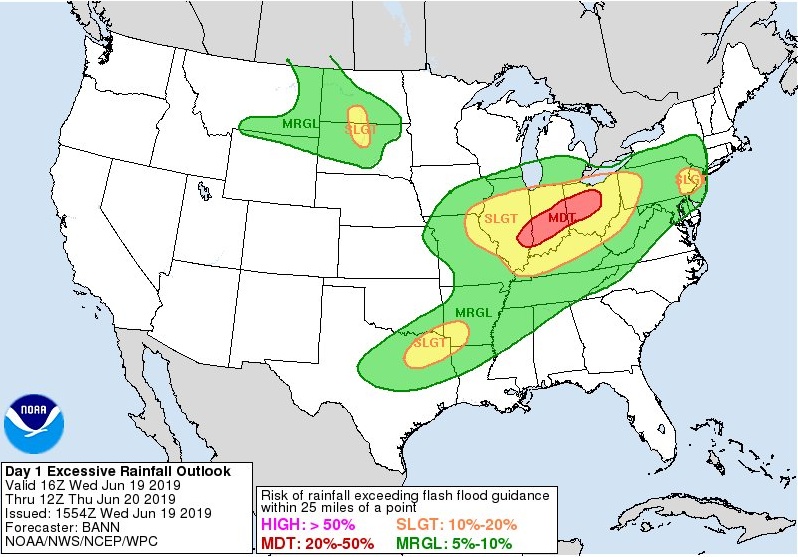 Ahead of the system, areas of low pressure slowly shift eastward bringing periods of moderate to heavy rain are expected across portions of Montana and the northern Plains through Friday before moving east into the Upper Mississippi Valley Saturday.

From the Midwest eastward, a potent low pressure system for June shifts from near St. Louis this evening eastward while slowly consolidating, bringing more heavy rainfall across portions of the Ohio Valley and Northeast where there is a risk of excessive rainfall.

A Moderate risk of excessive rainfall/flash flooding exists across portions of Illinois, Indiana, and Ohio through tonight within an area that has seen much above average rainfall this past week. Near the end of its trailing cold front and an outflow boundary left behind from rainfall overnight/this morning, thunderstorms with heavy rain carry an enhanced risk of becoming severe across northeast Texas and the ArkLaTex region per the Storm Prediction Center into tonight.

As the low strengthens while moving through the Northeast Thursday and Friday, a cold front whisks through the Mid-Atlantic States into the Carolinas bringing brisk winds and refreshingly mild conditions on Friday and Saturday to a good portion of the East, with the front settling in the Carolinas on Friday.