Heavy rainfall and snowfall hit several areas of Afghanistan, Pakistan and eastern Iran over the last few days, causing flash floods and landslides in which more than 50 people lost their lives.

As of 14:00 UTC on March 5, the death toll reached 50 people, dozens of people were injured and at least 10 remain missing. At least 25 people were reported dead in Pakistan, 20 in Afghanistan and 5 in eastern Iran. 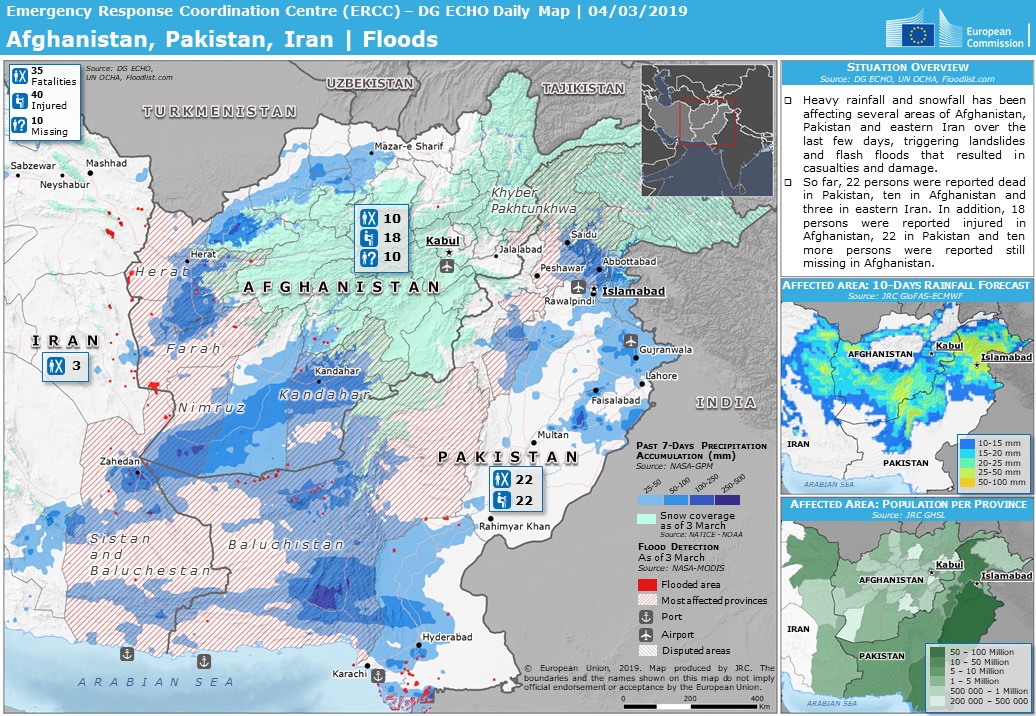 In Afghanistan's province of Kandahar, at least 13 people have lost their lives and more than 1 000 homes, patches of land, schools, mosques and government buildings have been damaged.

A further 10 people, including children and those from the Kochi (nomadic) community, are still missing, while more than 1 000 people stranded by the flood waters have been rescued by ANSF.

Kandahar's Deputy Governor Abdul Hanan Moneeb said the flooding was the worst in seven years, with many nomadic herders camped in the area swept away by the floodwaters along with their livestock.

Reports suggest that 85% of Farah city in Afghanistan has been flooded and the majority of roads are closed, hampering movement throughout the city, UN OCHA reported March 3. Local authorities and private construction companies are working to remove the debris caused by the floods and re-open the roads. The highway between Hirat and Farah is reportedly flooded and two cars traveling on that road were swept away by flood waters.

As a result of the floods, telecommunications are down, hampering communication between flood-affected people, local authorities and humanitarian partners.

In Hirat, flooding has been reported in Shindand, Zawol, Zirkoh, Pashtunzarghun and Obe districts. In Shindand 200 houses have reportedly been swept away. The full extent of the damage in other affected districts is still being assessed.

Heavy rain and snowfall left at least 13 people dead and dozens injured in Pakistan's Balochistan. An official said March 4 that the severe weather that started March 2 hit a large part of the province and caused destruction on a large scale.

An emergency was declared in the flooded district of Qila Abdullah by the provincial government and the army’s help was sought to aid the local administration in rescue and relief efforts. "An alert has been issued due to the alarming flood situation," said a provincial government official.

Over the next 24 hours, moderate rainfalls are forecast over northeastern regions of Afghanistan and northern regions of Pakistan.