An unusual extended period of heatwaves over much of Australia began in early December 2018 and continued into January 2019. The Australian mean daily maximum temperature on December 27, 2018 (40.19 °C / 104.34 °F) was the highest on record for December, and the second-highest for any month, BOM said in Special Climate Statement released January 17, 2019.

Numerous locations reported their highest December or January daily maximum temperature on record, with some locations exceeding their previous records by large margins. Overall, it was Australia's warmest December on record.

These widespread heatwaves during December and January followed an extreme heatwave that affected the tropical Queensland coast during late November as the heatwave conditions began an anticlockwise loop around the country.

Rainfall was below average over the Pilbara and Kimberley region of Western Australia for several months towards the end of 2018.

Into December, the region had seen little thunderstorm activity and no monsoonal activity, and thus little cloud or moisture influencing the weather.

With the summer solstice occurring on December 22, the sun during this period was almost directly overhead, providing the maximum amount of solar radiation.

Weather patterns over northern Australia tended to be static, with heat lows persisting and no significant synoptic systems to change the air mass. This provided near-ideal conditions for heat build-up.

The progression of troughs and other weather systems from west to east across Australia, and northwesterly winds ahead of the troughs, dragged the hot air east and south periodically over the Northern Territory, South Australia, western Queensland, New South Wales, and Victoria.

While all exceptional climate events have proximate causes in antecedent and concurrent weather conditions, long-term trends also play a role. Australia's annual mean temperature has warmed by just over 1 °C (1.8 °F) since 1910, and summer has warmed by a similar amount.

The country experienced widespread heatwaves during the last week of December into early January, with temperature records exceeded across a large area from northwest Western Australia to southeastern Australia. 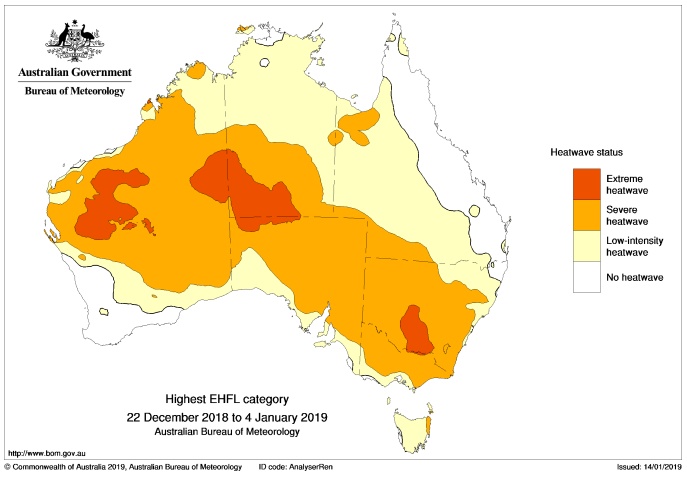 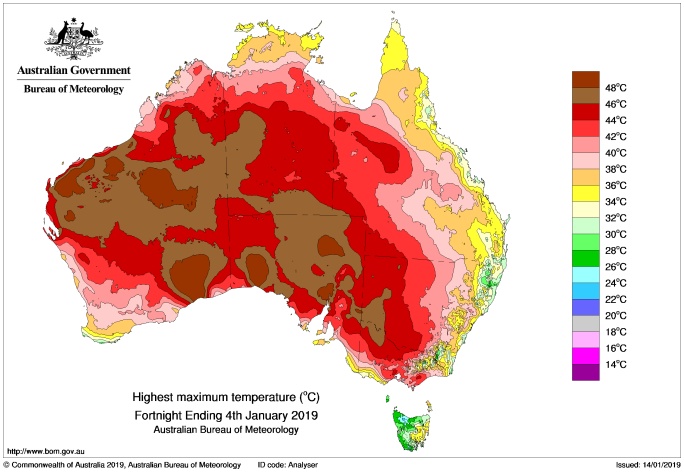 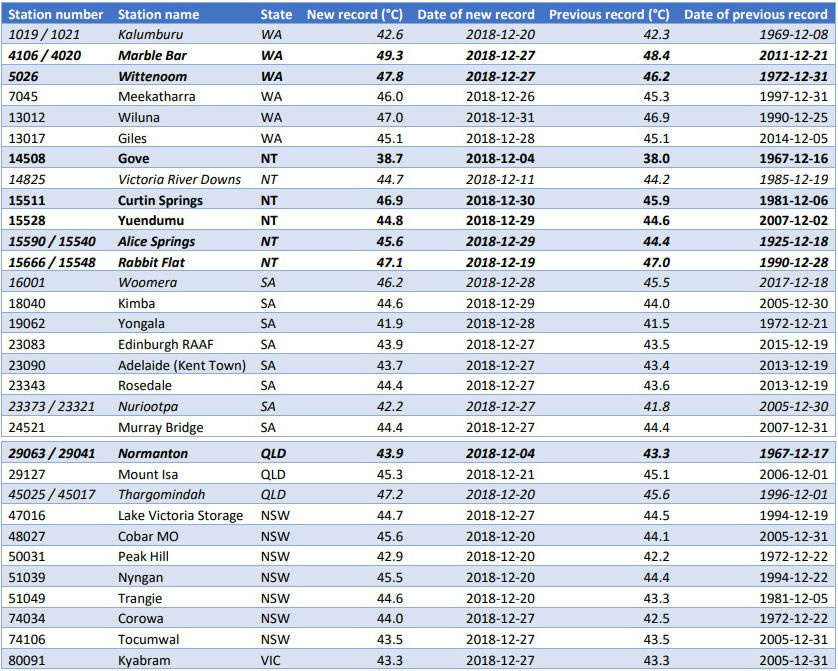 December 2018 high maximum temperature records at locations with 40 years or more of data. ACORN-SAT locations are shown in italics. Records for any month are shown in bold.

January high maximum temperature records at locations with 40 years or more of data. ACORN-SAT locations are shown in italics. Records for any month are shown in bold.

December high minimum temperature records at locations with 40 years or more of data. ACORN-SAT locations are shown in italics. Records for any month are shown in bold.