Indonesian authorities are reporting increased activity at Mount Merapi over the past couple of days. Lava has so far flowed up to 800 m (2 624 feet) down the slope of the volcano. Authorities are preparing evacuation routes and emergency shelters as well as calculating logistical needs in anticipation of a major eruption. The Alert Level remains at 2 (of 4).

"The volume and the extent of the lava flow were both relatively normal, but the volunteer team has banned all human activity within a 3 km (1.8 miles) from the crater," JP quoted Dimas Joko, a volunteer monitoring the volcano.

PVMBG advised people to stay away from the upper slopes of the mountain for their own safety, especially considering the lava flow.

Added more photos on my website from my recent trip to observe the ongoing activity at #Merapi volcano 12-14th January. Note all photos taken from outside the 3km restriction zone. https://t.co/JtMbor5anP pic.twitter.com/WPy1V1VUsj

I've watched #Merapi on the BPPTKG webcams page; within ~20 min. (at least) 2 explosions occurred, followed by avalanches of hot dome material. High time to get out of the way for a few km below! Screenshot from: https://t.co/SC5AN7reSa pic.twitter.com/zE1p8VacCh

After the rain, comes good weather and clarity. And #Merapi too if you happen to be in #Yogyakarta  #volcano pic.twitter.com/gzeEAPUXby 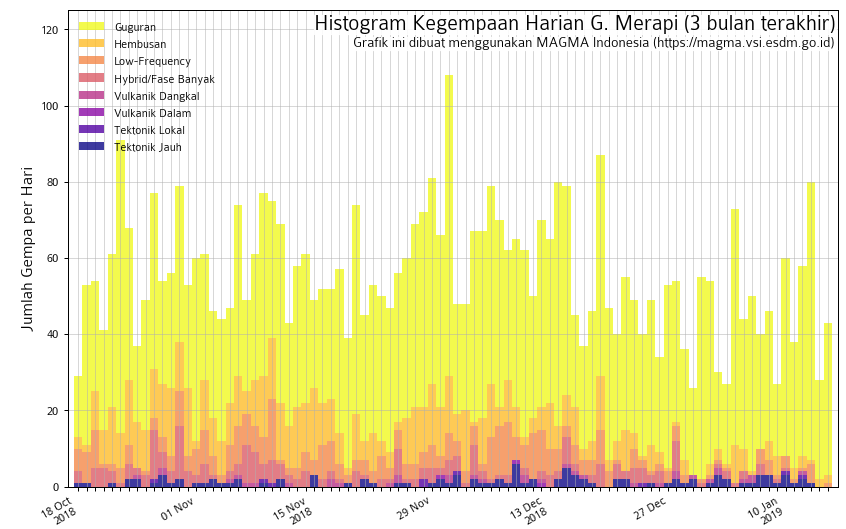 The Alert Level remains at 2 (on a scale of 1-4), and residents were warned to remain outside of the 3-km exclusion zone.

Thousands of people are living on the flanks of Mount Merapi, active stratovolcano regularly erupting since 1948. It is located about 28 km (17 miles) north of Yogyakarta city (population 2.4 million).

In November 1994, a large explosion at the volcano produced pyroclastic flows that killed 27 people.

Merapi, one of Indonesia's most active volcanoes, lies in one of the world's most densely populated areas and dominates the landscape immediately north of the major city of Yogyakarta. It is the youngest and southernmost of a volcanic chain extending NNW to Ungaran volcano.

Subsequently, the growth of the steep-sided Young Merapi edifice, its upper part unvegetated due to frequent eruptive activity, began SW of the earlier collapse scarp. Pyroclastic flows and lahars accompanying growth and collapse of the steep-sided active summit lava dome have devastated cultivated lands on the western-to-southern flanks and caused many fatalities during historical time.