A slow-moving winter weather system will produce hazardous travel conditions across the Midwest through tonight, and into the Mid-Atlantic this weekend. 15 – 30 cm (6 to 12 inches) of snow is forecast in the Midwest, with 5 – 15 cm (2 to 6 inches) in the Mid-Atlantic, including up to 10 cm (4 inches) in the National Capital area. Ice accumulations up to a quarter inch will be possible in places.

This may be the biggest snowstorm of the season for some cities, AccuWeather senior meteorologist Alex Sosnowski said. It will slow down travel in the mid-Atlantic, while a wintry mix causes disruptions farther south. 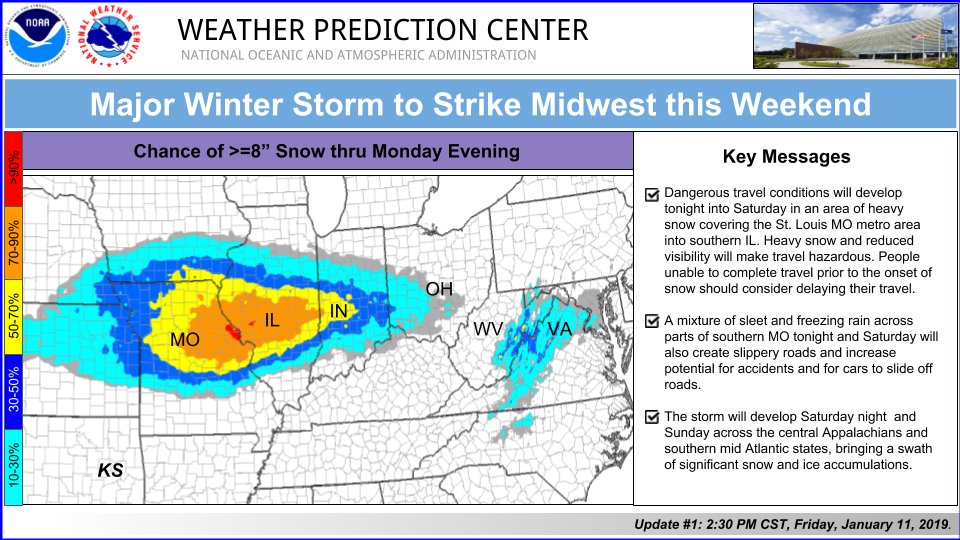 "A long-duration winter storm is foreseen for parts of West Virginia, Virginia, Maryland, Delaware, and North Carolina. Snow is forecast to spread quickly eastward with the storm early in the weekend, and may linger into early Monday in some areas," Sosnowski said.

"Snow will spread across much of the central Appalachians on Saturday morning. Snow will then spread farther to the east across the mid-Atlantic during Saturday afternoon, while a wintry mix and rain advance across the South. Before the storm arrives in the East, moderate to heavy snow will first spread across a wide swath of the Midwest. Ripple-effect flight delays and cancellations are possible prior to the storm's arrival across the mid-Atlantic. Heaviest snow likely along I-64, I-81 and I-95 in Virginia."

Moisture will begin to surge northward across the southern plains by early Friday as a front develops in association with a surface low over northern Texas, NWS forecaster Hamrick said.

As this frontal system progresses eastward, showers and some thunderstorms ahead of the front will move across central Texas Friday afternoon and evening.

By Saturday evening, January 12, showers and thunderstorms should become more numerous across the Deep South as a warm front lifts northward from the Gulf of Mexico.

The more significant facet to this storm system will be the winter weather impacts, Hamric noted.

Winter Storm Gia is about to make a big ole mess as the biggest snowstorm of the season for many. We're live this morning with your #BigPicture, and we'll be live throughout the storm. pic.twitter.com/KG288gDzWb

On Friday, heavy snow is expected to occur along the Colorado Rockies and northern New Mexico. From Friday night into Saturday, widespread snow is forecast to effect areas from the central plains to the western portions of the Ohio Valley.

The heaviest snowfall accumulations with this event are currently anticipated across northern Missouri and central Illinois, with amounts in excess of 20.3 cm (8 inches) possible.

There should also be a zone of sleet and freezing rain across the Ozarks and extending across Kentucky and towards the southern Appalachians.

By Saturday evening and into early Sunday, the wintry precipitation will begin to move across the Ohio Valley and then the mid-Atlantic region with snow developing across much of Virginia and West Virginia, and lighter snow north of Maryland.