Strong winds and heavy rain produced by Storm "Callum" hit Ireland and parts of the UK during the early morning hours of Friday, October 12, 2018, and will continue affecting the region into October 13. Callum is the 3rd named storm of the 2018–19 European windstorm season (September – March). This is the fourth instance of official seasonal European windstorm naming in Europe.

In Ireland, around 60 000 homes and businesses lost power as winds gusts over 110 km/h (68 mph) hit the country today. The worst affected was its western coastline. Met Eireann weather station in Belmullet, Co Mayo registered wind gust of 124 km/h (67 mph) at about 07:20 UTC today.

The National Emergency Coordination Group said the worst of the storm has passed. However, people are still being urged to be aware of local conditions and to stay away while Status Orange warning remains in place.

Friday’s weather system has been named as #StormCallum by @MetEireann The strongest winds are likely in western Ireland though NW parts of the UK can expect severe gales. The main impacts for the UK will be from heavy rain across some western areas Friday & Saturday #weatheraware pic.twitter.com/KGq20Y2NAU

The latest satellite image shows how big #StormCallum is. It's going to be a wet and windy day for many places  pic.twitter.com/kYgQZLCTYo

#StormCallum Record of winds measured at our station in Belmullet, Co. Mayo showing a gust of 67 knots (124 km/h) this morning at about 07:20 (timeline on image is UTC) pic.twitter.com/Uz1jNhzHjW

According to RTE, high tide in Galway city passed without any major incident. A temporary 'aquadam' along the banks of the Corrib contained the river, with just some spot flooding near Spanish Arch.

Many of the fallen trees around the country are now cleared as well as most roads. Road in Salthill is closed between Mutton Island and The Promenade, which is also closed from there to Blackrock. Cobh/Fota road in Co Cork is closed at Carrigaloe due to a mudslide and the Bailick road in Midleton is impassable due to flooding. Part of the promenade wall in Tramore, Co Waterford, was damaged and the prom is expected to remain closed until at least 16:00 LT.

Status Orange – Wind warning is in place for Donegal, Galway, Mayo and Sligo and valid to 16:00 local time today. South or southwest winds will continue to gust to between 100 and 130 km/h (60 – 80 mph), with further infrastructural damage possible. There is the continued risk of coastal flooding due to high seas.

Status Orange – Gale Warning was issued 12:00 LT, October 12: South to southwest winds will continue to reach gale to storm force for a time this afternoon on all Irish coasts and on the Irish Sea. South or southwest gales will continue this evening on coasts from Slyne Head to Malin Head and also in the Irish Sea but will moderate elsewhere.

Status Yellow – Small Craft Warning was issued at the same time. South or southwest winds will reach force 6 or higher at times today on all Irish coasts. 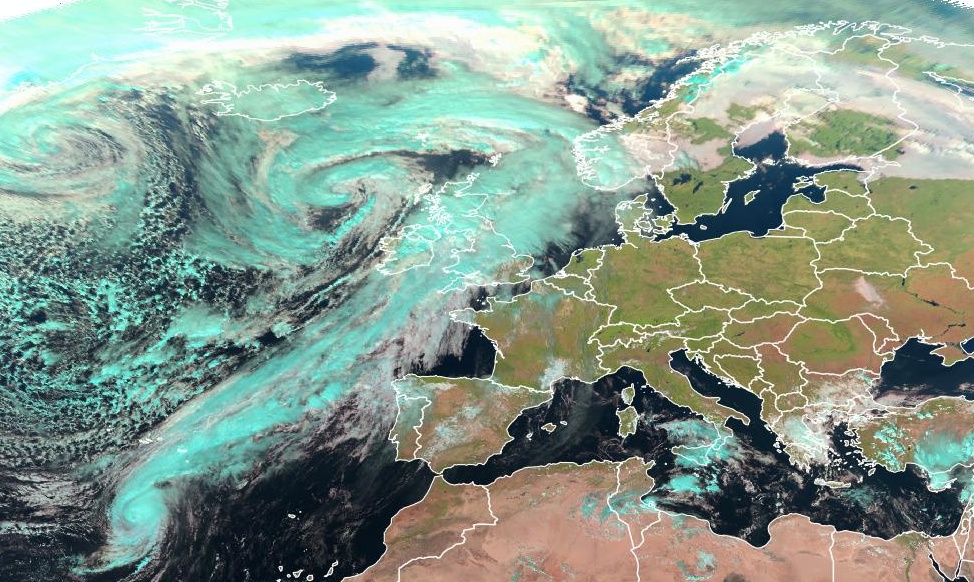 In the United Kingdom, Met Office issued Amber warning for heavy rain for Wales, in effect from the morning of October 12 into October 13, and wind warning for the entire country.

Hundreds of homes across Wales lost power this morning. Wind gusts up to 116 km/h (72 mph) were recorded at Capel Curig in Conway, BBC reports.

More than 1 000 homes in Northern Ireland are also without power.

Making plans for lunch? Definitely an indoor day across Wales and southwest England with heavy #rain. Elsewhere drier but windy, although still warm in the southeast pic.twitter.com/BXSyGLhkGx

#StormCallum is bringing a windy day for all, with damaging gusts in places. Stay #weatheraware pic.twitter.com/VZUPQWl0Ad

"The zone of heavy rain affecting England and Wales on Friday is expected to move slowly northwards on Saturday. The focus of heaviest rainfall will remain across Wales, and move increasingly into parts of Scotland. Again, areas of high ground are expected to be most affected with the potential for a further 50 – 80 mm of rain quite widely," the office said October 10.

"The current forecasted rain could cause flooding this week, especially in south and west Wales, and we are urging people to prepare themselves," said Sioned Warrell, Natural Resources Wales Duty Tactical Manager.