A vigorous eruption of lava continues from Kilauea's lower East Rift Zone (LERZ) fissure system in the area of Leilani Estates and Lanipuna Gardens. Local videographers reported that lava entered the ocean at Kapoho Bay at about 08:30 UTC on June 4, 2018.

A fast-moving lava from Fissure 8 entered Green Lake in Kapoho on June 2, filled it and evaporated all of the water. Green Lake was the largest freshwater lake in the Hawaiian Islands. 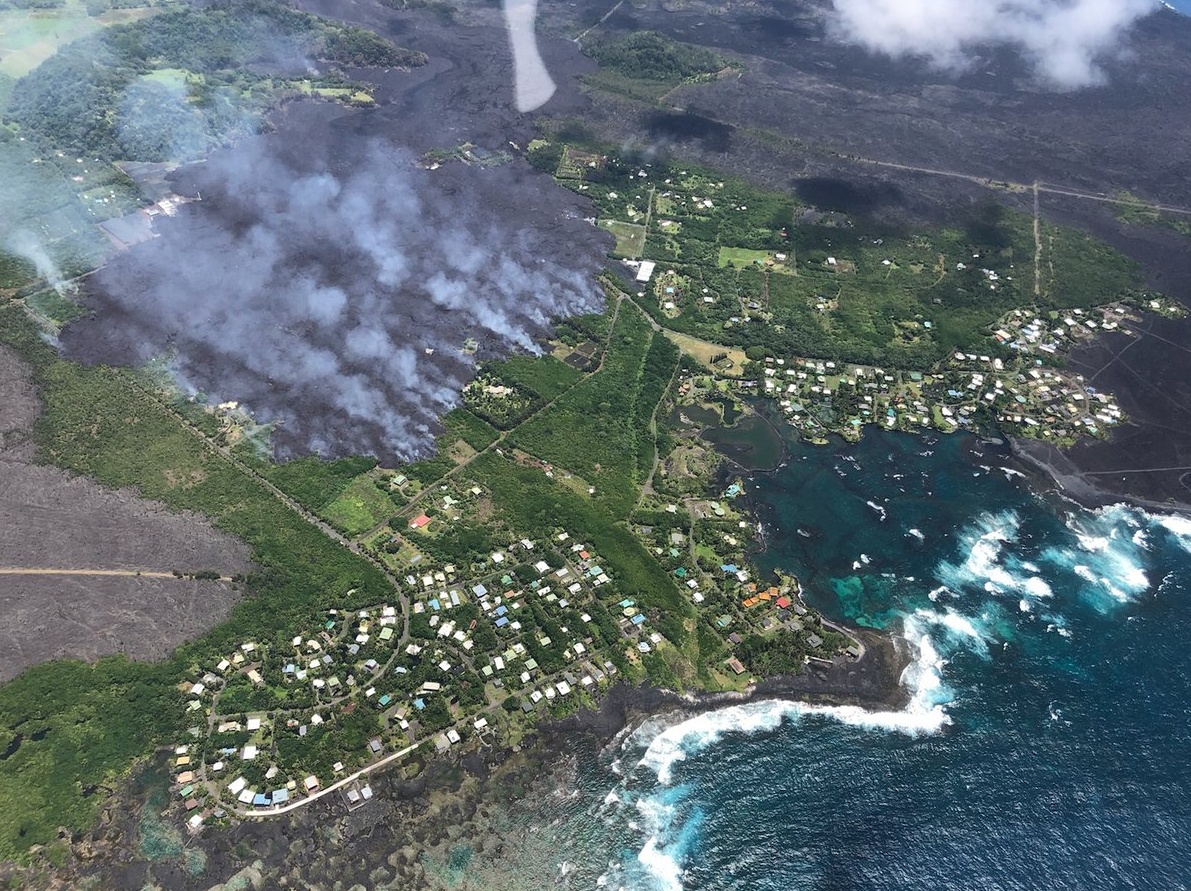 Local videographers reported that lava entered the ocean at Kapoho Bay at about 08:30 UTC on June 4 (22:30 HST, June 3). As of 16:30 UTC on June 4, lava is constructing a delta in Kapoho Bay extending a few hundred yards into the bay. 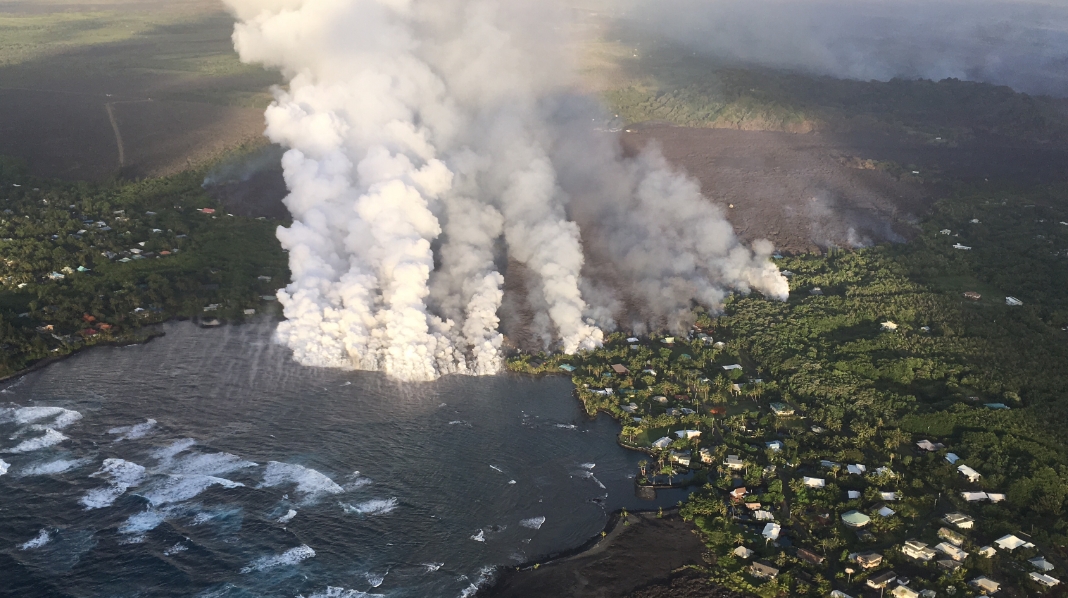 Overflight photograph at approximately 16:13 UTC, June 4 shows the lava flow originating from Fissure 8 (not visible in photograph) entering Kapoho Bay. The ocean entry was reported to have occurred by 08:30 UTC, June 4, 2018. Credit: USGS/HVO

A laze plume is blowing inland from the ocean entry but dissipating quickly.

Laze is formed when hot lava hits the ocean sending hydrochloric acid and steam with fine glass particles into the air. Health hazards of laze include irritation to your lungs, eyes and skin.

Be aware that the laze plume travels with the wind and can change direction without warning.

Residents and visitors should avoid this plume at the entry point and downwind, as even the wispy edges can cause skin and eye irritation and breathing difficulties.

The lava flow front is now about 800 m (0.5 miles) wide. A lava breakout is also occurring upslope of the Kapoho cone cinder pit, with active flows about 300 m (330 yards) southeast of the intersection of Railroad Avenue and Cinder Road.

Sluggish lava flows are present in the vicinity of Fissure 18, but all other fissures are inactive.

Pele's hair and other lightweight volcanic glass from high fountaining of Fissure 8 are falling downwind of the fissure and accumulating on the ground within Leilani Estates. However, winds may waft lighter particles to greater distances. 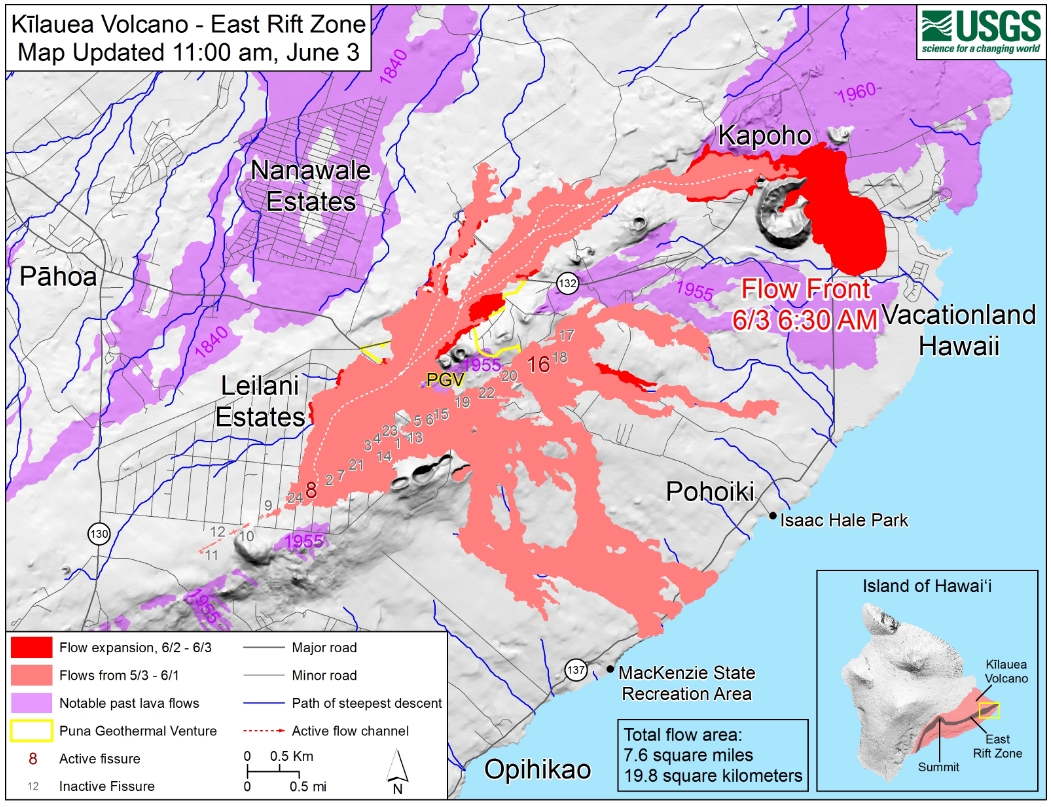 Volcanic gas emissions remain very high from the fissure eruptions and trade wind conditions are bringing vog to the south and west sides of the Island of Hawaii. Afternoon easterly winds may bring vog to communities in the Volcano area.

Additional ground cracking and outbreaks of lava in the area of the active fissures are possible.

Residents downslope of the region of fissures are reminded to heed all Hawaii County Civil Defense messages and warnings.