A magnitude 3.6 earthquake was registered within the caldera of Öræfajökull volcano in Iceland at 05:07 UTC on February 9, 2018 and was followed by 10 aftershocks. This volcano is on Yellow alert since November 17, 2017 when a new ice-cauldron formed within its caldera. The last eruptive episode of this volcano started in August 1727 and ended in May 1728.

Today's earthquake is the largest recorded in Öræfajökull since instrumentation in the area started in 1976, The Icelandic Met Office said. The earthquake occurred inside the caldera just southeast of the ice-cauldron, about 1 km (0.62 miles) in diameter, that formed in November last year. The depth seems to be confined in the first few kilometers of the crust."

Öræfajökull has been showing signs of unrest for over a year, IMO said, adding that two other earthquakes larger than M3 have been recorded since last fall – M3.5 on the October 3, 2017 and M3.1 on January 18, 2018. 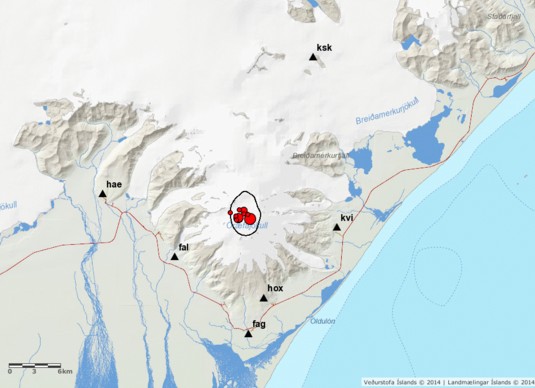 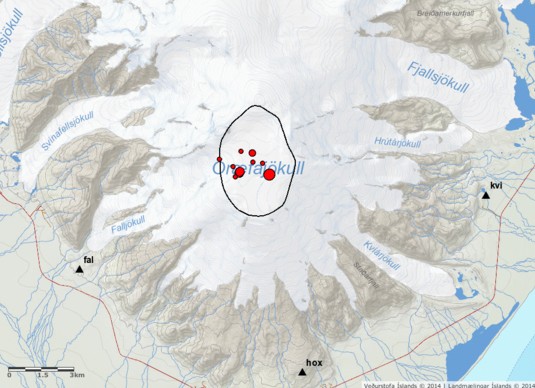 No significant changes have been observed for the past weeks with other monitoring data, including deformation, hydrological and geochemical data available to the Icelandic Meteorological Office.

An overflight, to measure glacial surface will be done as soon as the weather condition allows, IMO said. This is important as it can reflect changes of the underlying geothermal system.

In addition, satellite images will be acquired in the next days to identify possible changes of the ice-surface.

No significant changes have been seen in the satellite images this year (last image required end of January).