A potent winter storm is expected to spread a mix of snow, sleet, and freezing rain to a large portion of the Ohio Valley, Mid-Atlantic and Northeast US on Wednesday, February 7, 2018. NWS warns that the ice accretion could be over 0.6 cm (0.25 inches) in some locations. A burst of Arctic air will sweep behind today's storm and result up in a quick freeze-up. In addition, this storm system could bring heavy rain to parts of Kentucky and West Virginia, leading to flash and river flooding. The Weather Channel named this system Winter Storm Liam.

A potent storm system is developing over the lower Mississippi Valley today and is expected to lift up across the Tennessee Valley, central Mid-Atlantic and southern New England by this evening (local time).

The National Weather Service warns that heavy snowfall can be expected north and west of the main low track. Areas of the northern Mid-Atlantic region and interior Northeast will see the heaviest snowfall with some areas seeing as much as 15 – 30 cm (6 to 12 inches).

Just south of this axis of heavy snow will be a stripe of freezing rain which will extend from the Ohio Valley northeast up across southern New England. Some locally significant icing is expected, NWS said.

"A burst of Arctic air will sweep in behind Wednesday's winter storm and result in a quick freeze-up from the Ohio Valley to the northeastern United States," Alex Sosnowski, AccuWeather senior meteorologist warned.

"Untreated roads and sidewalks may be icy in the wake of the storm by or before the Thursday morning commute to work and school. The conditions are likely to result in travel delays and may lead to additional school delays and closings on Thursday," he said.

A quick clean-up of snow and slush and application of ice-melting products treatment are strongly recommended by AccuWeather meteorologists in the wake of the storm. 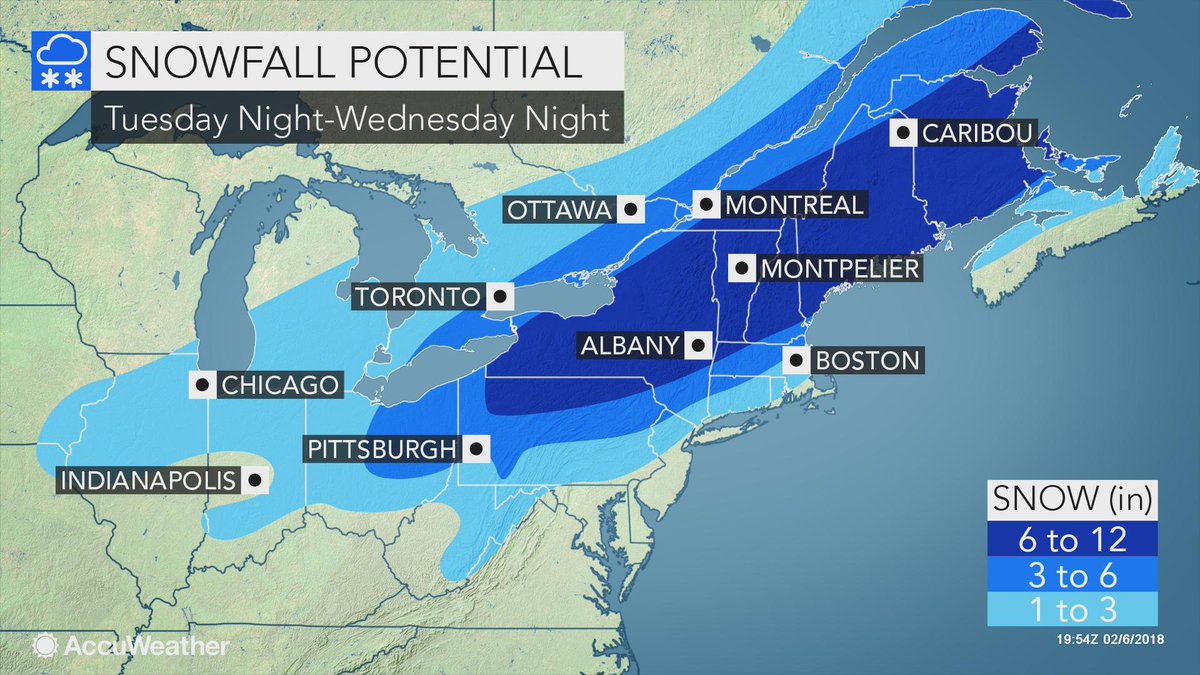 Farther south across the Gulf Coast states and into the Southeast, the concern will be heavy rain and thunderstorms today in association with the same storm system driving the winter weather hazards farther to the north.

Heavy rain will also be impacting the Tennessee Valley and there will be some localized concerns for runoff problems and flooding with as much as 25 – 50 cm (1 to 2 inches) of rain before the storm system lifts out later today.

Colder temperatures and drier conditions will arrive across the South and the Eastern US in the wake of this system Thursday, February 8, although there will be some additional potential for lake effect snow downwind of Lake Ontario impacting the Tug Hill plateau region of western New York, NWS said.

Temperatures will be generally normal to below normal across the South and the East on Thursday, but a warmer trend will begin on Friday ahead of a new storm system that will be developing over the central Plains.

Meanwhile, the weather across the Pacific Northwest and the northern Rockies will become more unsettled over the next couple of days as a new storm system drops southeast and approaches the region from British Columbia.

This will allow a new surge of moisture to arrive which will bring rain to coastal areas of Washington, and locally very heavy snow across the northern Rockies. A particular emphasis will be on the Bitterroots and to an extent the Tetons where these locations are expected to see new snowfall totals of 30 – 90 cm (1 to 3 feet) through at least early Friday, February 9.

Heavy snow will also be streaking out farther east across the northern High Plains and especially south-central to western Montana to the east of the Continental Divide as the same Pacific moisture fetch overruns an arctic frontal zone banked up against the eastern slopes of the northern Rockies.

Significant snowfall totals here in excess of 30 cm (1 foot) can be expected over the next couple of days, NWS forecaster Orrison said.