The volcanic activity at Aoba (Ambae) volcano in Vanuatu continues at major unrest state and the Alert Level continues at Level 2, the Vanuatu Meteorology and Geo-hazards Department said in a special bulletin No1 issued January 29, 2018. The current eruption is focused in the summit crater and there are no indications of activity elsewhere on Ambae Island.

"The volcanic eruption at Ambae volcano confined inside the Lake Voui is stable," the agency reports. New scientific analyses suggest that there is no imminent risk of increasing activity and the Volcanic Alert Level remains at Level 2. The restricted area of risk is now limited within 2 km (1.2 miles) from the active vent in Lake Voui.

Observations photos taken on December 2017 and January 2018 confirm that the activity continues from the volcanic cone (island) which was built during the latest eruption. Style of Ambae volcano activity has changed with explosions and volcanic cloud emitted mostly white, which means only steam. With the current size of the volcanic cone in Lake Voui, people from Ambae may hear explosions, view a minor volcanic ash and/or gas plume and glows over the mountain at night. The activity at Ambae is like what is seen and experienced at Yasur on Tanna Island.

The volcano activity currently consists of ongoing emission cloud of gases, ashes and volcanic bombs that may fall around the volcano vents.

The eruption at Ambae started on September 6, 2017, when the Volcanic Alert Level was raised to Level 3. The style of the eruption has changed around September 22, 2017, when Geohazards staff observed lava (molten rock) at the surface for the first time.

This was a significant change and raised the level of uncertainty about the development of the eruption. The volcanic Alert Level was also raised at that time to Level 4.

With more observations and the analysis of seismic, gas, thermal and deformation data by scientists from the Geohazards Division of the Vanuatu Meteorology and Geohazard Department (VMGD) and the international counterpart, it is confirmed that the volcano has settled in a more stable state of activity, therefore the Alert Level was dropped to Level 3 on October 6, 2017.

Based on its slight decreased seismic activity and observation of ongoing volcanic gas emission and steam plumes on the web camera in December 2017, the Volcanic Alert Level (VAL) at Ambae was dropped to Level 2 on December 7, 2017.

"With the continuous close monitoring, the nature of this volcano activity is more understandable. Therefore the current observations are consistent with the Alert Level 2 activity (Similar to Yasur)," the observatory said.

Level 2 indicates ‘Major Unrest’ – Danger is around the crater rim and specific area, there is a considerable possibility of an eruption and also chance of a flank eruption.

Ambae is a very large volcano and is frequently active. In the recorded history, there have been many eruptions, every 10 – 50 years over the past 150 years. All have been from the summit craters, except one recorded in 1670’s when a lava flow occurred in the Ndui Ndui area.

"This a reminder to all tourism agencies, local authorities, people of Ambae and the general public not to access the Danger Zone which is about 2 km radius from the eruptive vent. In this area, volcanic gases, ashes and projectiles are expected. Villages from Ambae island may experience volcanic hazards from gas and ashes especially those exposed to prevailing trade winds direction," VMGD warns. 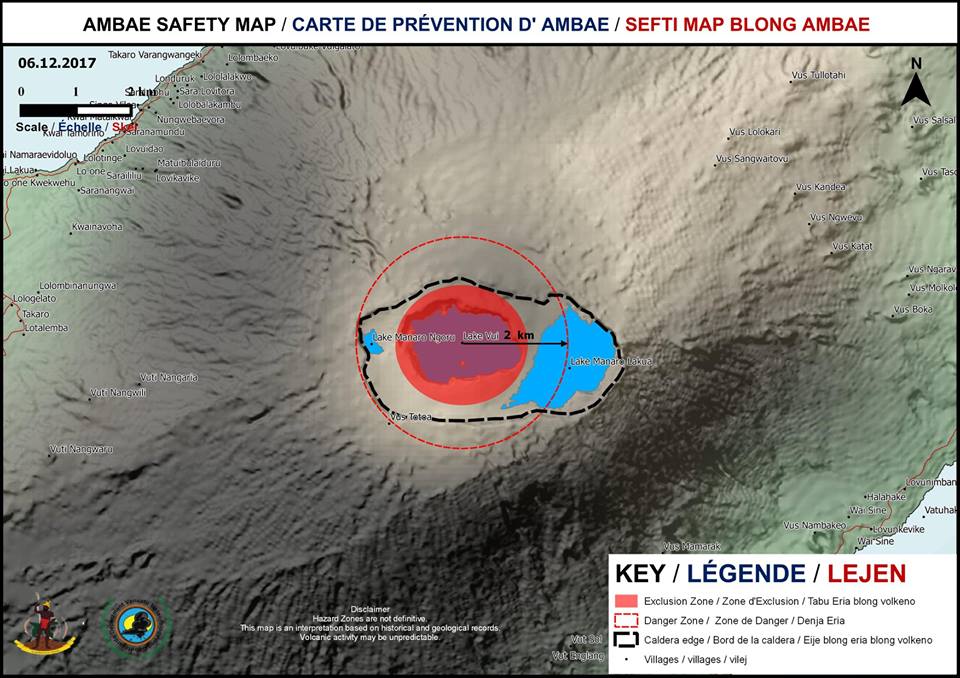