Astronomer Gregory Rudnick sees the universe crisscrossed by something like an interstellar superhighway system. Filaments — the strands of aggregated matter that stretch millions of light years across the universe to connect galaxy clusters — are the freeways.

Rudnick, associate professor of physics & astronomy at the University of Kansas, wants to know more about how filaments influence galaxies that are moving through them. Now, the KU researcher has earned a US$280,000 grant from the National Science Foundation to lead an international collaboration that is investigating galaxies that extend along this "cosmic web" of filaments.

"I’m interested in how galaxies are affected by the regions in which they live," Rudnick said. "Filaments are the first place where galaxies come into contact with higher density regions of the universe. If a galaxy in a ‘rural’ part of the universe enters a dense part, I want to know how its properties change — for example, does it change the number of stars it forms, or does its shape get altered? Using the highway analogy, when you drive into Kansas City, as you go there are more and more cars building up next to you, and sometimes there are car accidents — this is something like the real universe because galaxies can collide, too." 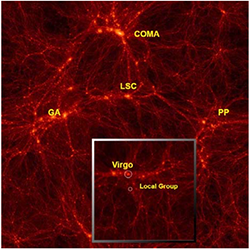 Rudnick and colleagues will use multiple telescopes around the world to observe neutral hydrogen and molecular gas in galaxies as they travel along filaments. The team hopes to determine if the amount of gas — the fuel for star formation — is less abundant in filament galaxies than in galaxies from other environments, like those by themselves or those in groups or clusters of galaxies.

"When galaxies enter a filament the pressure of the diffuse gas in the filament may slow down how quickly the galaxy forms stars," Rudnick said. "Every galaxy has gas — and if there’s enough, it can collapse into little nuggets and form stars. Galaxies are constantly being fed by gas and blowing it out in a complex system. When a galaxy enters a filament, the gas that usually feeds into a galaxy now just becomes part of the filament. The galaxy might get disconnected from its gas umbilical cord."

In other words, Rudnick said, "Maybe a filament is like a long stretch of highway without a lot of gas stations."

Rudnick’s collaborators include Rose Finn and Graziano Vernizzi of Sienna College in Loudonville, New York, as well as researchers around the world and KU students — including one graduate student who will be directly supported by the grant. The team will utilize several telescopes including the Philips Claude Telescope on Mount Laguna Observatory in California, of which KU owns a share. The group will also use the IRAM telescope at Pico Veleta in the Spanish Sierra Nevada, the Nançay Radio Telescope in France and one of NASA’s infrared-wavelength astronomical space telescopes, dubbed "WISE" for the Wide-field Infrared Survey Explorer.

The team’s observations will study the target galaxies in many different wavelengths of light, revealing diverse pieces of information about them. For example, not only will the investigators observe the stars that are present in the galaxies, but also the gas that is the raw material for the formation of new stars.

"Gas has many phases and different forms," Rudnick said. "Neutral hydrogen is single hydrogen atoms with one proton and one electron. But when that gets compressed, the hydrogen atoms can combine to form molecular hydrogen with two atoms — that’s what stars form from. Neutral hydrogen is the reservoir of gas, and when it gets funneled on into galaxies it becomes molecular hydrogen and can form stars — and it glows. By observing that glow in light that is invisible to the eye, but visible with radio telescopes, we can measure the fuel supply of galaxies."

Rudnick said that the team would make observations at many different wavelengths to better grasp the cycle of gas within galaxies as it is supplied, heated, used and expelled. For example, to observe the emission of ionized hydrogen, the team will focus on specific wavelengths of light that correspond to those in the red part of the visible spectrum. It is these observations that will be carried out with KU’s share in the Philips Claud Telescope on Mount Laguna.

"If you take a hydrogen atom and knock an electron off and if it falls back onto the atom later, it emits light at a specific wavelength," Rudnick said. "The glow of that specific light tells us where stars are forming right now. And ‘right now’ is within five to 10 million years — in astronomy terms that’s a blink of an eye as these galaxies take at least a few hundred million years to noticeably evolve."

Part of the grant work also will support a successful research-based astronomy program in local Kansas schools, expanding it to 20 students of diverse backgrounds.

"I’m now in the fifth year of running an outreach program at Lawrence High School," Rudnick said. "As part of the program, I work with a teacher who earned his BA in astronomy at KU and with a KU graduate, both who help to run the course. In the first semester, students take a class in astronomy similar to what we teach students at KU. In the second semester, they do a research project with data from NASA's Spitzer Space Telescope, which culminates in a mini-symposium at KU attended by faculty and graduate students."

Provided by The University of Kansas