Tropical Storm "Saola" formed late September 23, 2017, south of Guam, the Pacific Ocean as the 22nd named storm of the 2017 Pacific typhoon season. Saola is expected to strengthen into a Category 1 hurricane equivalent within a couple of days as it approaches Okinawa.

Saola is expected to continue tracking northwest for the next 48 hours and then turn northeast. The system will maintain its intensity over the next 12 hours as it continues to organize and consolidate. Weak outflow conditions will prevent rapid intensification within the next 48 hours. After that, a brief period of intensification will occur as outflow conditions become improved through interaction with the mid-latitude westerlies.

On the current forecast track, Saola will approach Okinawa-Jima early October 28 (UTC) with peak winds of 120 km/h (75 mph), turn NE toward mainland Japan and track parallel to Japan through October 30 while weakening.

"While the system is not expected to intensify into the same level as Lan, it will likely strengthen into at least a strong typhoon within a couple of days, and that will be done in just enough time to cause some problems for those in Okinawa," meteorologist Jonathan Oh said.

"The current track from the Japan Meteorological Agency has the storm moving awfully close to Okinawa with the circle of concern including the islands in the region. Should this forecast hold together, those living in the area should expect deteriorating conditions by late Friday with strong winds, high surf, and significant rainfall. 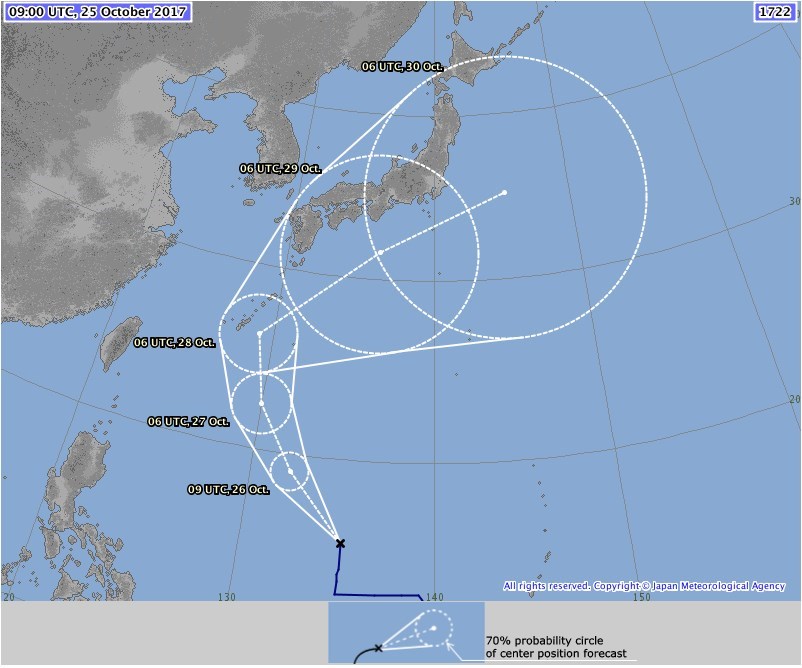 "The wildcard in this current setup is a significant trough that is expected to drop out of Russia and moving through Mongolia and China. The timing of this trough is critical in the forecast," Jonathan said.

"Current indications show the trough to arrive over the Korean Peninsula by Sunday. At that pace, it would not be able to move nearly quickly enough for the storm to curve out sharply to sea. If that is the case, those in south and western Japan will get the most impact from this system. This change is really dependent on the high pressure setup that is currently over China. If this high can move eastward fast enough with the influence of the developing trough, it may be enough to force Saola out to sea before impacting Japan, but the variability and uncertainty of this are still quite high. Confidence in the forecast is likely to increase Thursday as the timing of the trough’s approach can be verified."