What used to be Tropical Storm "Harvey" degenerated to an open wave on August 19 and regenerated back into a tropical depression on August 23, 2017. Further strengthening is expected and Harvey could become a hurricane on August 25 while approaching the coast of Texas. Residents are warned that Harvey is bringing very heavy rain that could cause life-threatening flooding. In addition, swells produced by this storm are likely to cause life-threatening surf and rip current conditions.

The tropical wave that led to the formation of Tropical Storm "Harvey" first emerged and was monitored by the National Hurricane Center early on August 13. A complex area of disturbed weather formed southwest of Cabo Verde later that day as the wave began interacting with a broad low-pressure trough.

The disturbances split by early August 15, and the western system slowly coalesced into a potential tropical cyclone by 15:00 UTC, August 17. A reconnaissance aircraft investigating the system was able to locate a well-defined circulation, and the disturbance was upgraded to Tropical Storm "Harvey" accordingly. On the same day, Harvey passed over the Windward Islands bringing flooding rain.

The effects of moderate easterly wind shear plagued the storm after formation, shifting its low-level center to the eastern edge of the associated convection.

In contradiction to forecasts of slow intensification, the system's cloud pattern continued to deteriorate and more resembled a tropical wave than a tropical cyclone on August 19. A reconnaissance flight into the storm later that day confirmed that Harvey had degenerated to an open wave.

A few days later, after crossing the Yucatan Peninsula on August 22, Harvey started to once again develop a low-level circulation and regenerated into a tropical depression in the Bay of Campeche on August 23. 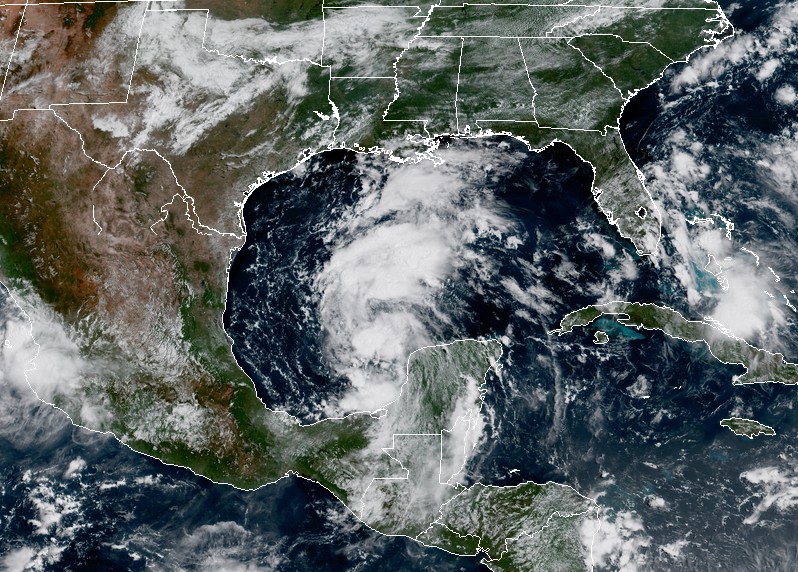 Hurricane conditions are possible within the hurricane watch area by late Friday, with tropical storm conditions possible by early Friday.

On the current forecast track, Harvey should be approaching the coast of Texas on Friday, August 25. Some strengthening is forecast during the next 48 hours, and Harvey could become a hurricane on Friday. 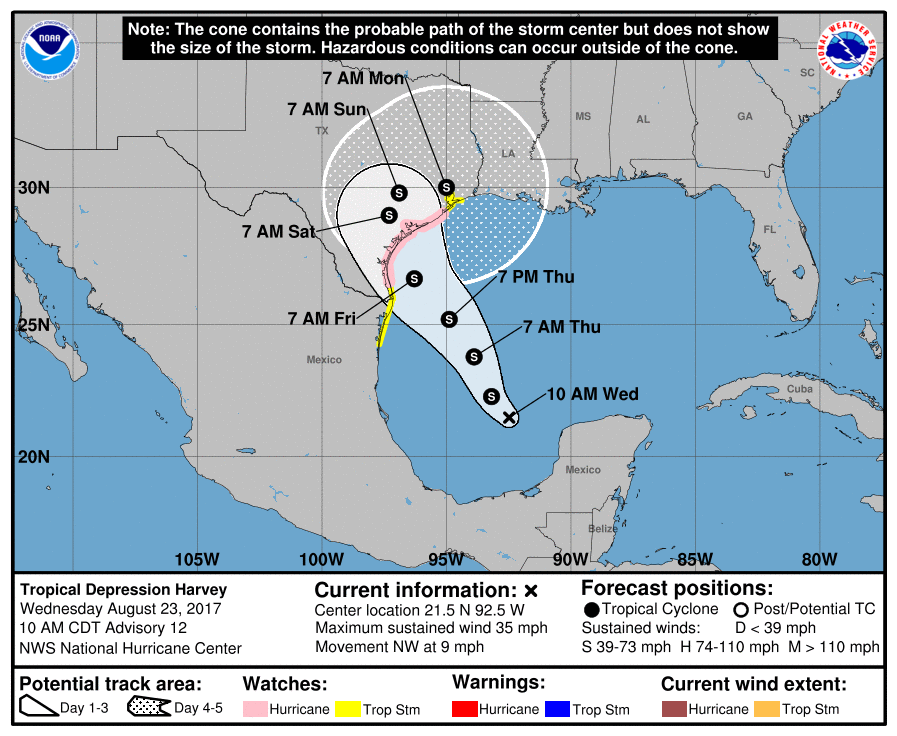 This is a dangerous system, expected to produce total rain accumulations of 254 to 381 mm (10 to 15 inches) with isolated maximum amounts of 508 mm (20 inches) over the middle and upper Texas coast and southwest Louisiana through next Tuesday, with heavy rainfall beginning as early as Friday morning.

Harvey is also expected to produce total rain accumulations of 76.2 to 228.6 mm (3 to 9 inches) in portions of south, central, and northeast Texas and the rest of the lower Mississippi Valley. Rainfall from Harvey could cause life-threatening flooding.

The combination of a dangerous storm surge and the tide will cause normally dry areas near the coast to be flooded by rising waters moving inland from the shoreline. The water is expected to reach 1.2 to 1.8 m (4 to 6 feet) above ground if the peak surge occurs at the time of high tide from Port Mansfield to High Island.

The deepest water will occur along the immediate coast near and to the northeast of the landfall location, where the surge will be accompanied by large and destructive waves. Surge-related flooding depends on the relative timing of the surge and the tidal cycle, and can vary greatly over short distances.

Swells generated by Harvey are likely to affect the Texas, Louisiana, and northeast Mexico coasts by Friday. These swells are likely to cause life-threatening surf and rip current conditions.