Tropical Storm "Harvey" formed 21:00 UTC, August 17, 2017 east of the Windward Islands in the North Atlantic Ocean as the 8th named storm of the 2017 Atlantic hurricane season. Harvey is expected to move through the Windward Islands and into the eastern Caribbean Sea on Friday, August 18, 2017. Rains produced by this storm could cause life-threatening flash floods and mudslides.

"Weather conditions continue to deteriorate as the center of Harvey approaches Barbados. Pockets of moderate to heavy showers and frequent thunderstorms are affecting Barbados and will continue to do so during the early part of today."

Some rainfall stations across the island have already observed accumulations of 25 to 50 mm (1 to 2 inches) and a further 50 to 75 mm (2 to 3 inches) are possible.

In addition, large easterly swells of at least 2.5 to 3.0 m (8 to 10 feet) are forecasted to accompany the system. Thus, a Small-Craft Warning is in effect.

Residents are urged to remain on the alert and take all necessary precautions.

"Some flash-flooding has already been reported," the agency reported 03:00 UTC (23:00 AST, August 17). "Thus a Flood-Warning has been issued and will remain in effect until 12:00 AST (noon) on Friday, August 18. Rainfall accumulations of at least 75 – 125 mm (3 – 5 inches) are possible. Residents in flood prone areas should continue to  exercise caution and remain on the alert."

St. Vincent and the Grenadines NEMO said the center of Harvey is expected to pass over St. Vincent and the Grenadines between 12:00 and 14:00 AST Friday (16:00 and 18:00 UTC). "Most of the convection/rainfall is around the center of the storm. We, therefore, expect the effects of Harvey to be with us all day tomorrow [Friday] into the late afternoon."

"We are in for a long night and day tomorrow. Be prepared and take this storm seriously," it warned.

The Argyle International Airport was closed at approximately 20:00 AST, Thursday, August 17. "Based on the current forecast the airport is unlikely to open during the day on Friday, however, persons traveling are asked to check with their respective airlines and listen to the radio for any changes," NEMO said.

NEMO previously asked all Shelter Managers to activate their shelter management teams and have the shelters opened by 20:00 AST, Thursday, to receive persons who need shelter.

All business and non-essential services for St. Vincent and the Grenadines are closed. 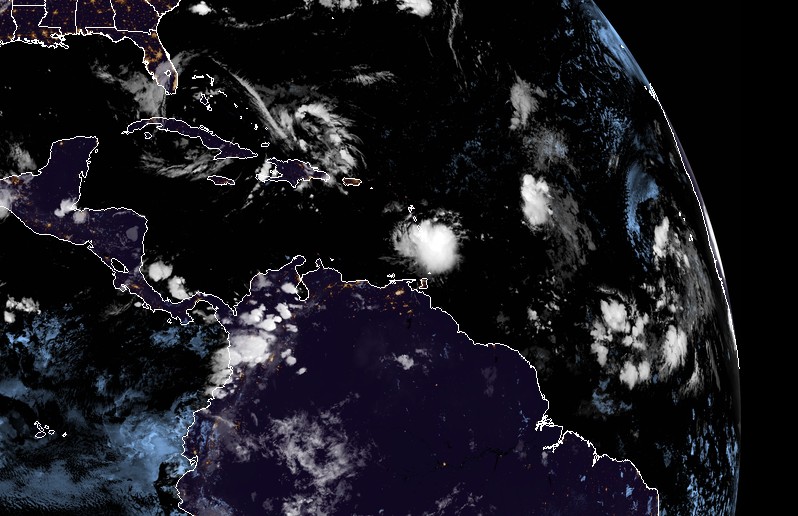 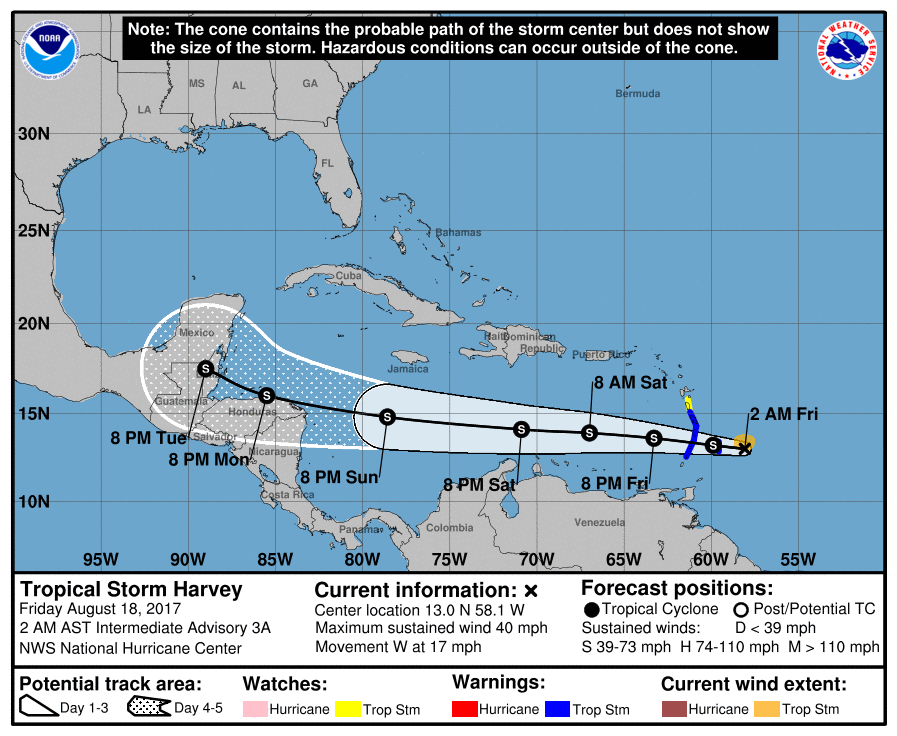 Continued westward motion with a slight increase in forward speed is expected over the next couple of days. On the forecast track, Harvey should move through the Windward Islands and into the eastern Caribbean Sea on Friday.

Harvey is expected to produce rainfall totals of 50.8 to 101.6 mm (2 to 4 inches) across portions of the Windward Islands from Martinique southward to Grenada. These rains could cause life-threatening flash floods and mudslides.