Hurricane "Ophelia" will be the most severe weather event to hit Ireland since Hurricane "Debbie" hit in 1961, resulting in 15 deaths, Met Eireann, the Irish National Meteorological Service warns. Ophelia is expected to be near the southwest tip of Ireland by Monday morning, October 16, 2017 – RED level severe weather warnings are in place. The UK Met Office has issued Amber and Yellow warnings for Northern Ireland. Preparations to protect lives and property should be finished today.

As of 20:00 local time, Sunday, October 15, 2017, a RED severe weather warning, the highest, is in effect for the entire Ireland! Ex-Hurricane Ophelia is forecast to track directly over Ireland during daytime Monday. Violent and destructive gusts are forecast with all areas at risk and in particular the southwest and south in the morning, and eastern counties in the afternoon. Also, heavy rain and storm surge along some coasts will result in flooding. There is a potential risk to lives.

"Ophelia is expected to transition to a post-tropical storm as it approaches our shores on Monday bringing severe winds and stormy conditions. Mean wind speeds in excess of 80 km/h [50 mph] and gusts in excess of 130 km/h [81 mph] are expected, potentially causing structural damage and disruption, with dangerous marine conditions due to high seas and potential flooding," Met Eireann warns. "The latest information from our colleagues in the National Hurricane Centre in Miami indicates that Ophelia will become a powerful post-tropical cyclone (from thereon in ex-Hurricane Ophelia) by Monday."

Ex-Hurricane "Ophelia" is expected to be near the southwest tip of Ireland by Monday morning. From there it looks set to track northwards close to the Atlantic Seaboard at a fast pace to be roughly situated 100 – 200 km (62 – 124 mph) northwest of County Donegal by midnight on Monday.

"This will be a significant weather event for Ireland with potentially high impacts – structural damage and flooding (particularly coastal) – and people are advised to take extreme care and keep up to date with the warnings," Met Eireann warns.

Rain can be expected over the country on Sunday night and into Monday, though the heaviest and most significant rain will remain out to sea in the Atlantic on the western side of the surface low pressure. But there will also be some heavy and possibly thundery bursts rotating around the low center itself, so it can be reasonably assumed that counties closest to the center of the low will see the heaviest rainfall.

At the same time, damaging winds will accompany the low center with wind gusts of 130 km/h (81 mph) or more. The most severe winds will be in coastal counties, with lower impacts likely for central areas. In addition, we can expect very high waves and dangerous sea conditions.

"A dangerous storm surge is expected to produce significant coastal flooding near and to the east of where the center of the post-tropical cyclone makes landfall. Near the coast, the surge will be accompanied by large and destructive waves," Met Eireann said in their Hurricane "Ophelia" update issued 18:00 UTC, Sunday, October 15. 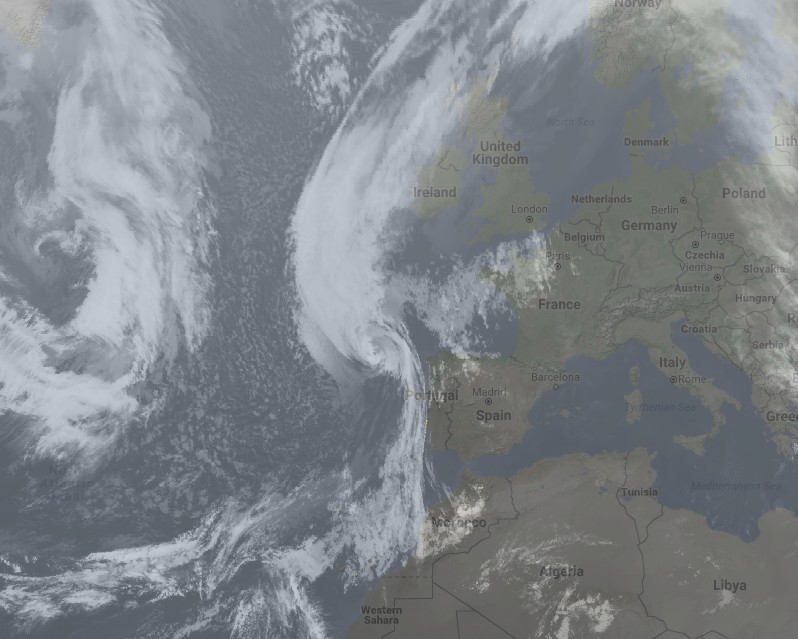 The UK Met Office has issued Amber and Yellow warnings for Northern Ireland.

Ex-Ophelia will cross northern parts of Ireland during Monday afternoon and evening (local time), October 16 bringing some very strong winds to Northern Ireland. Gusts of 88 – 105 km/h (55 – 65 mph) are likely across Northern Ireland with 113 – 129 km/h ( 70 – 80 mph) gusts in the far southeast. A smaller area of very gusty winds is then likely to run across Northern Ireland from the west with 105 – 121 km/h (65 – 75 mph) gusts possible for a short period of time in any one location. Both of these areas of very strong winds may well occur during a busy traveling period.

Longer journey times and cancellations are likely, as road, rail, air and ferry services may be affected as well as some bridge closures. There is a good chance that power cuts may occur, with the potential to affect other services, such as mobile phone coverage. Flying debris is likely, such as tiles blown from roofs, as well as large waves around coastal districts with beach material being thrown onto coastal roads, sea fronts and properties. This leads to the potential for injuries and danger to life.

Road, rail, air and ferry services may be affected, with longer journeys times and cancellations possible. Power cuts may occur, with the potential to affect other services, such as mobile phone coverage. Some damage to buildings, such as tiles blown from roofs could happen, perhaps leading to injuries and danger to life from flying debris. Coastal routes, sea fronts and coastal communities may be affected by spray and/or large waves. The warning has been updated to extend the area at risk further east, taking in much of northern England and Wales along with parts of southern and central Scotland. At the same time, much of northwest Scotland has been removed.

Southerly winds are most likely to gust between 88 to 105 km/h (55 – 65 mph) across much of the warning area with the potential for gusts of 120 km/h (80 mph) in coastal areas, particularly on the eastern side of Northern Ireland. The very strong winds will probably extend to parts of northern England along with some southern and central parts of Scotland in the evening as winds veer more southwesterly across the whole warning area. Heavy rain is also possible in association with this system in parts of Northern Ireland and western Scotland.

Very strong winds are forecast to continue to affect some parts of the UK during Tuesday. Southwesterly winds are most likely to gust between 80 – 96 km/h (50 – 60 mph) across much of the warning area with the potential for gusts of 112 km/h (70 mph) across the Central Belt of Scotland and parts of Northeast England. Although the strongest winds are likely overnight they may last into the morning's busy travel period across the Central Belt of Scotland and more especially Northeast England. The worst of the winds should ease from Northern Ireland in the early hours of Tuesday and from eastern areas of Scotland and northern England by early afternoon. Heavy rain is also possible in association with this system with western Scotland most prone at this stage. 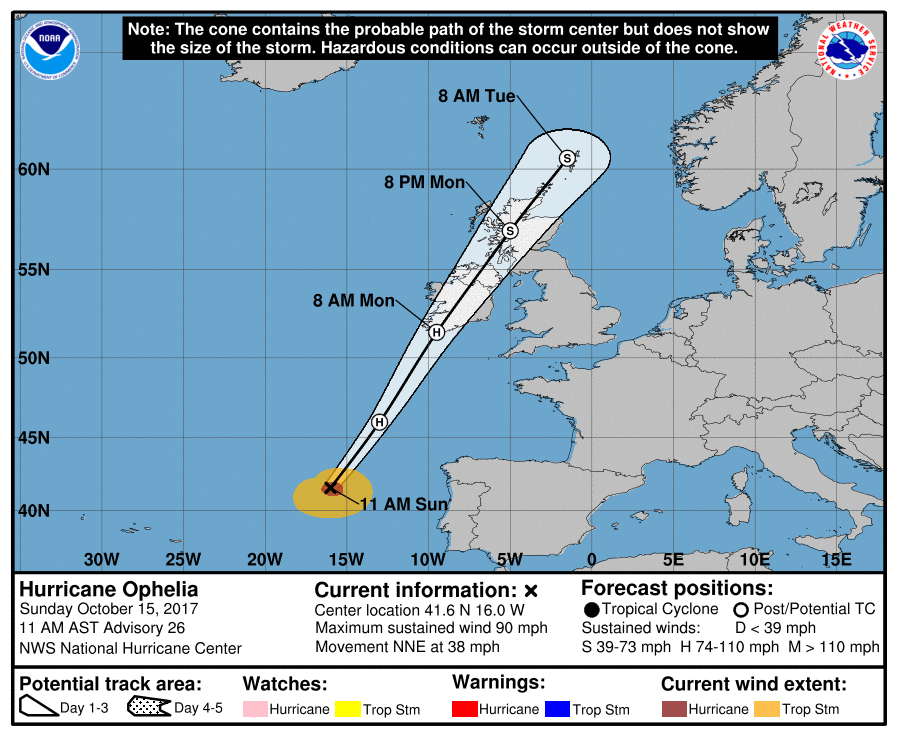 Its maximum sustained winds were 150 km/h (90 mph), making Ophelia a Category 2 hurricane on the Saffir-Simpson Hurricane Wind scale. Additional weakening is forecast, but Ophelia should maintain hurricane force winds until it reaches Ireland.

The system is moving NNE at 61 km/h (38 mph) and has minimum central pressure of 973 hPa. This general motion is expected to continue during the next 24 to 48 hours.

On the forecast track, the center of the post-tropical cyclone will approach Ireland on Monday morning. However, strong winds and rains should begin earlier, NHC noted.

Wind speeds atop and on the windward sides of hills and mountains are often up to 30% stronger than the near-surface winds indicated in this advisory, and in some elevated locations could be even greater.

A dangerous storm surge is expected to produce significant coastal flooding near and to the east of where the center of the post-tropical cyclone makes landfall. Near the coast, the surge will be accompanied by large and destructive waves.