The flood situation in India's state of Assam drastically worsened on Saturday and Sunday, August 12 and 13, 2017, after heavy monsoon rains engulfed the region on Friday. At least 5 people died on Saturday and another 15 on Sunday, bringing the death toll in the state to 104 since the start of the monsoon season. Across the country, heavy rains killed least 70 people within just 48 hours. Heavy rains are also affecting neighboring Nepal, where at least 47 people died since Friday, and Bangladesh.

Assam state officials called in army to rescue marooned people in Nagaon and Kokrajhar districts and IAF has been put on standby as Assam reels under one of the worst flood furies.

"On Assam government's request, IAF has also put its men on standby, their choppers can be deployed in minimum time for air dropping of relief and rescue operations," state project coordinator of disaster management Rajib Prakash Baruah said, as reported by the India Blooms.

India Blooms added that continuous erosion by Kundil river has been causing a serious threat to Panchmile, Lakhimi Gaon, Bogoribari apart from threatening Kundil Bridge. Officials said that dredging of the river Kundil during winter season will be taken up so that the change or river course which has taken place due to persistent erosion can be tackled. 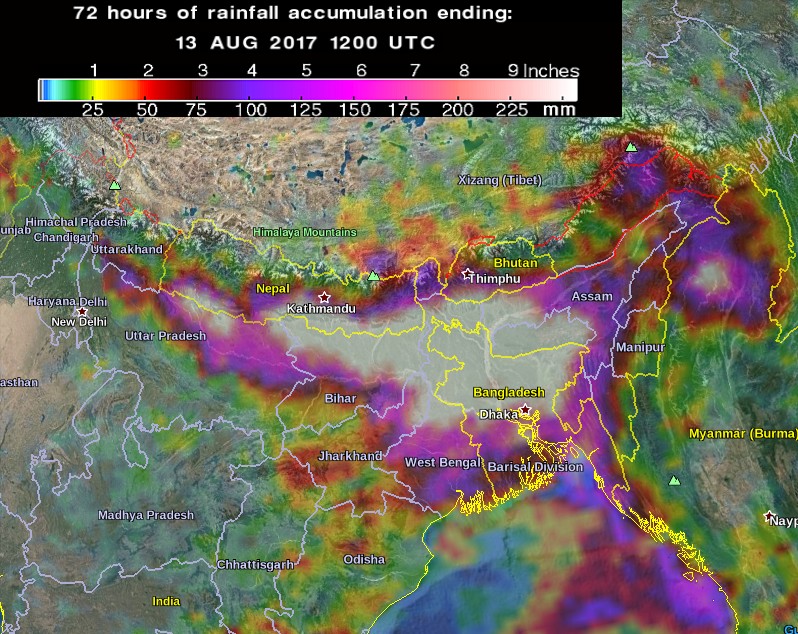 At least 46 of them died early Sunday when a massive landslide swept away two buses and several vehicles in Himachal Pradesh. In Uttarakhand, a girl was killed and her parents are missing following a landslide that buried their house on Saturday.

The death toll in Nepal is expected to rise, with around two dozen other people missing and feared dead.